ICE was in the process of deporting Pauline Binam before Rep. Sheila Jackson Lee worked to have her taken off a plane.

Millions across the country have responded in horror last week after a nurse filed a whistleblower complaint alleging women detained by ICE in Georgia were having hysterectomies performed on them against their will.

Since nurse Dawn Wooten aired the alarming allegations on Sept. 14, 173 members of Congress have called for an investigation, and lawyers for at least 17 women have come forward with stories that confirm Wooten's allegations.

Although ICE has released multiple statements denying the accusations in the complaint, on Sept. 16, they reportedly fast-tracked the deportation of Pauline Binam, a Cameroonian woman who says doctors removed one of her fallopian tubes and told her she may never have more children because of it, according to Vox.

The US government appears to have involuntarily sterilized #FreePauline and is now poised to deport her.

It is time to act: https://t.co/gYbBzJpg4b

Binam, who has been held in ICE custody since 2017, was put on a plane from Houston to Chicago on the evening of Sept. 16 and was slated to be sent back to Cameroon, a country she has not been to since she was two years old.

That is where Rep. Sheila Jackson Lee took action.

In an interview with Blavity, the longtime congresswoman from Texas said she utilized her connections within the Department of Homeland Security to stop them from deporting the 30-year-old.

"We were working very late and word came to me from my colleague Congresswoman Pramila Jayapal. It was posed in such a crisis manner that I texted her and said I will work very hard to take care of it. [Binam] had been transferred to a detention center here in the Houston area and because of the relationships and because I work with the agency, I proceeded to reach out to my staff and got word the night before that she would not be deported that next morning," she said, noting that she has spent more than a decade as a member of the Homeland Security Committee.

"On Wednesday morning, I reached out to my staff in Houston to find out if she was OK and what the status was. Then we got the word that they had mistaken their information and she was actually in the midst of being deported, which obviously sent a shockwave. I was not to be denied. I know what fairness is," Jackson Lee added.

Jackson Lee said she pleaded with officials to understand that Binam was now part of the investigation into the hysterectomy allegations and should not be deported until she has had the chance to testify and appeal her deportation.

She argued that out of respect for the three branches of government, the agency had a duty to keep Binam in the United States and hear her out.

"I proceeded to, in a very hectic 30 minutes, call the agents and the head of the office in Houston. To my dismay, she had already flown from Houston to another state and was about to enter the [second] plane. She was on the plane as I was informed and had to be pulled off the plane after I convinced them that she should not be deported," Jackson Lee said.

"The fair thing to do is to allow her to return for the investigation and for a lawyer to be able to speak to her. She was alleging that she had an unwanted procedure and we just cannot deport her because she will be part of the factual basis of that investigation. Its not an immigration law to violate someone or to perform surgeries that were unwarranted or that they didn't understand. She really deserves an appeal in her case," she told Blavity.

ICE agents pulled Binam off of the plane and sent her back to a detention center in Houston, where she is in the process of submitting applications for a stay of her deportation, Jackson Lee said. 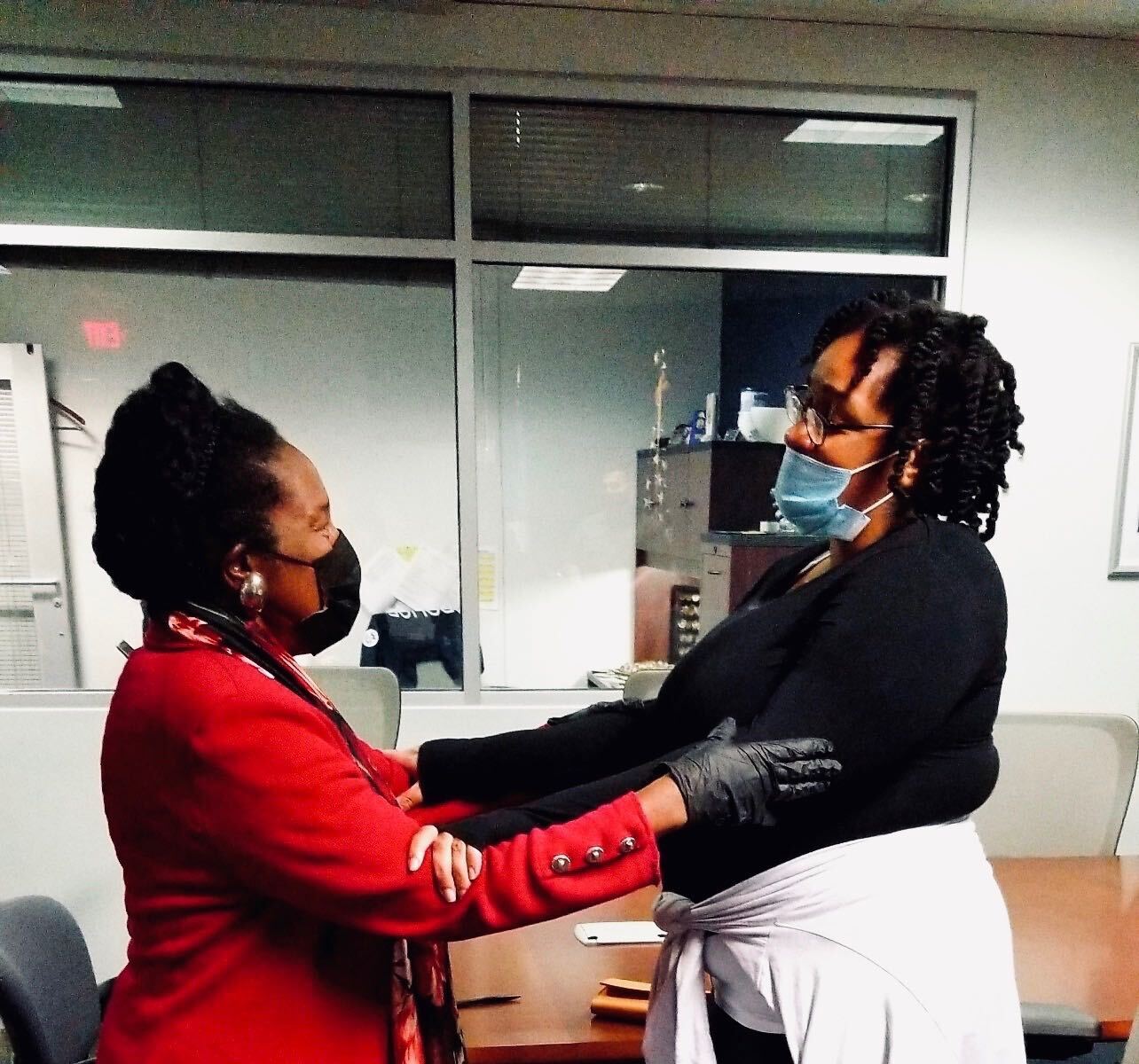 Since her near deportation on Sept. 16, Binam's lawyer has spoken to The New York Times, NPR, Vox and other outlets about her case and what happened to her while she was being held at the Irwin County Detention Center in Ocilla, Georgia.

Her attorney, Van Huynh told Vox that after Binam took a plea deal in a larceny case, deportation proceedings were kickstarted and she was detained at Irwin in October 2017. She spent two years in detention before she began to have irregular menstrual bleeding, which through her lawyer she said may have been brought on by the stress of being detained.

She spoke with medical professionals at Irwin who said she had a cyst on her ovaries that could be dealt with by taking out tissue from her uterus in a procedure called "dilation and curettage."

But when she woke up from the surgery in August 2019, the doctor told Binam that he had removed one of her fallopian tubes and that she may have issues having children in the future.

“I’m often not surprised by things in the world of immigration nowadays. I was shocked and appalled, hearing Nurse [Dawn] Wooten confirming what Pauline had been telling me all through 2019,” Huynh told Vox.

In other documents shared online, Binam reported being bothered that the surgery was performed on her without being fully explained.

#FreePauline is a Black mother who’s lived here since age 2.

Last fall, she went to ICDC’s gynecologist thinking she would have a routine surgical procedure.

She woke up involuntarily sterilized.

Instead of investigating, @ICEgov plans to deport her tomorrow. Act now! pic.twitter.com/yaKL0cZDOr

Huynh told The Cut that Binam has an 11-year-old child who is a U.S. citizen and has no connections to Cameroon. She has appealed the deportation order but Vox highlighted that ICE could have deported her whenever they wanted yet only chose to do so two days after Wooten's allegations became public.

"There are cases that deserve humanitarian consideration. This individual has been in this country since they were two years old, and I think there are meritorious reasons why she should not be deported. She does not even know the country that she came from. All of her family members are in this country," Jackson Lee said.

"Do we as Americans want to be known as people who are inhumane? Who cannot make decisions based upon humanitarian basis? Particularly when someone is not a threat to this country? She would be leaving behind her child. What kind of inhumane cruelty is that?" the congresswoman asked.

Jackson Lee said she was motivated to help Binam because of past cases she has seen where people who had built lives and contributed to the country were snatched away and deported without being given a chance to fix their immigration status.

It is important for Congress to get to the bottom of what happened to the women being held at Irwin, the Representative told Blavity, adding that multiple members of Congress plan to visit the site and press the inspector general to look into the hysterectomy allegations.

"We have to save lives. We cannot be known as a country that violates our own laws. We have had a history of women being denied reproductive rights and being violated medically. That is not America. I’m a woman, I’m a mother. When you do procedures that disallow a woman from making her choice or deny her from making a choice, you’re violating her very humanity," Jackson Lee said.

"I was heartbroken. I was stunned and I want to get to the bottom of it because I want other women not to have to go through this no matter where they are, whether they are civilly detained in the immigration system," she added.

While the true number of women who may have had gynecological surgeries performed against their will is unknown, The New York Times has spoken to a woman who has made similar allegations but has already been deported to Mexico.

Through her lawyer, Nancy Gonzalez Hidalgo said she also had a bad experience with Mahendra Amin, the doctor at the center of the allegations. According to Vox, Amin was also named on a pathology report from Binam's surgery but it is unclear if he worked with other doctors during her procedure.

In statements to The New York Times and NPR, Amin has denied all of the accusations since reporters discovered that he was the unnamed doctor referenced as the "uterus collector" in Wooten's report.

Jackson Lee told Blavity that if there are women who had unwanted surgeries done to them, they should be brought back to the United States to testify. She will be meeting with Binam in the coming days and spoke passionately about how the things being done to immigrants under the Trump administration have not only violated law but also basic decency.

She referenced the uproar over the child separation policy early in President Donald Trump's tenure, noting that many of the children separated from their families are permanently lost and will never be reunited because their families cannot be found.