This film leaves out trans activists, highlighting an epidemic in communal activism and American culture

This September, Ronald Emmerich and Jon Robin Baitz’s Stonewall is set to hit theaters. Many are excited for this story to be brought to the big screen. Others are skeptical — and for a good reason. Emmerich and Baitz’s film attempts to tell the story of the Stonewall Riots, which are widely admired and accredited as a critical event of the LGBTQI+ rights movement. But they designated a cisgender white gay male as the lead character while having a few token trans people in the background. No doubt, this movie is documenting this inspiring moment that's rarely taught in schools on a large scale, but it is erasing the contributions of those who started the movement. The initiation of the riots at Stonewall Inn are credited to a black drag queen, Marsha P. Johnson and a Latina trans woman, Sylvia Rivera. These two are nonexistent in the film. Instead, a cis white gay male is the focal point of a wholly fictitious movie, erasing the trans impact on the beginnings of the modern LGBTQI+ rights movement
https://twitter.com/SouthernHomo/status/629043001629671424 The cis/whitewashing seen in this movie is all too common in Hollywood, which is notorious for writing white people into roles meant for people of color. Emma Stone recently played a character who is, in real life, of Chinese and Hawaiian descent. The first African Disney princess is set to be a cis American white girl.

CIS-WASHING IS EXTREMELY DANGEROUS BECAUSE OF THE INCESSANT LACK OF INCLUSION TRANS FOLKS FACE AMONGST SOCIAL JUSTICE MOVEMENTS AND SOCIETY AS A WHOLE.

This year, Caitlyn Jenner made headlines all over the world. Her 20/20 interview with Diane Sawyer as well as her new show, I Am Cait, have introduced many to the trans community for the first time. Despite the existence of the transgender community throughout the country, many people do not personally know an openly trans person, much less know of the importance of their involvement in the LGBTQI+ movement. This lack of interaction with the trans community speaks to the widespread existence of transphobia in American politics and culture. Forty-one percent of trans people attempt suicide. In Florida, a bill was proposed to force trans people to use single-sex public restrooms in accordance with their assigned sex from birth. Trans women of color are frequently targeted by police and subject to violence from civilians. Trans women and men are frequently excluded from the feminist movement as well as ignored by many in the #BlackLivesMatter movement. The trans community is regularly marginalized from groups focused on eliminating institutionalized inequality because of the transphobia present across activist circles. This is why the intentional erasure of trans women of color from the highly anticipated film Stonewall is paramount 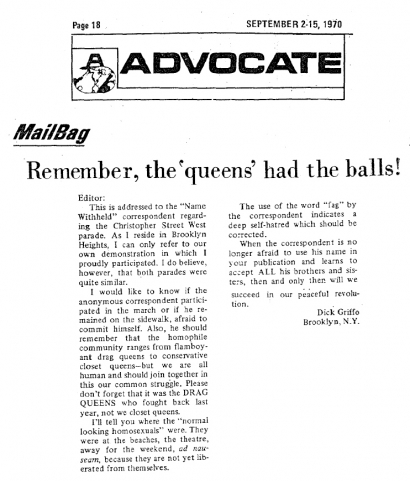 Instead of crediting the mostly trans crowd present at Stonewall for initiating the modern-day LGBTQI+ rights movement, Emmerich and Baitz are intentionally and unapologetically erasing them from history. They are perpetuating a culture that consistently excludes trans folks while maintaining an unprecedented amount of violence towards trans communities of color. They are erasing trans people of color from a movement that is supposed to be inclusive of all identities. Do not waste your money on this movie. Do not support a project that intentionally overlooks a group of people who helped millions become themselves. Instead, support Happy Birthday, Marsha, a movie that highlights the life, efforts, and work of black drag queen and activist Marsha P Johnson. Without her, the long awaited breakthrough of this summer might have never seen the light of day. Stonewall had the opportunity to shed light on a community that struggles for visibility. Instead of writing a semi-historically accurate portrayal of a crucial event, they intentionally skirted over an exceptionally marginalized community to make a guaranteed box office hit about a "pretty" cisgender white gay male 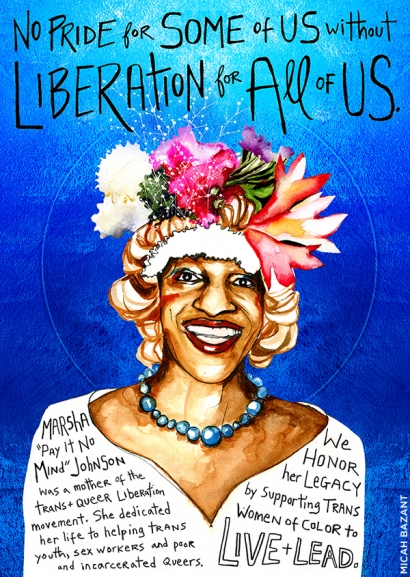