Frat members dressed as thugs and in blackface at a multicultural event.

Over the weekend, photos of members dressed as thugs -- with one sporting blackface -- at the college’s annual multicultural event surfaced online.

The photos appeared on Instagram with the caption: "She want a gangster not a pretty boy" and other social media platforms on Sunday. The white male members were dressed in stereotypical urban attire. The school launched an investigation into the fraternity photos that sparked protests around the campus and a standing-room only meeting to address racism.

“When I see that picture, it is kind of hard when all of your life you’re told that your skin is ugly, that you look dirty,” said Erica Green, a freshman, according to a video of the meeting. “It doesn’t make me feel that this campus wants people like me here, like I’m appreciated.”

According to KCBX, the initial photo was just the frat members in the "thug" wear, but a second photo surfaced showing one member in blackface. The outlet reports that the photo was taken Saturday, the day of the multicultural event. After news of the photos reached Lambda Chi Alpha's international headquarters, the organization sent an official statement denouncing the actions of this chapter's members.
"You are free to do whatever you want in the privacy of your own home. But the second you step foot outside that door, you represent this fraternity and its values." 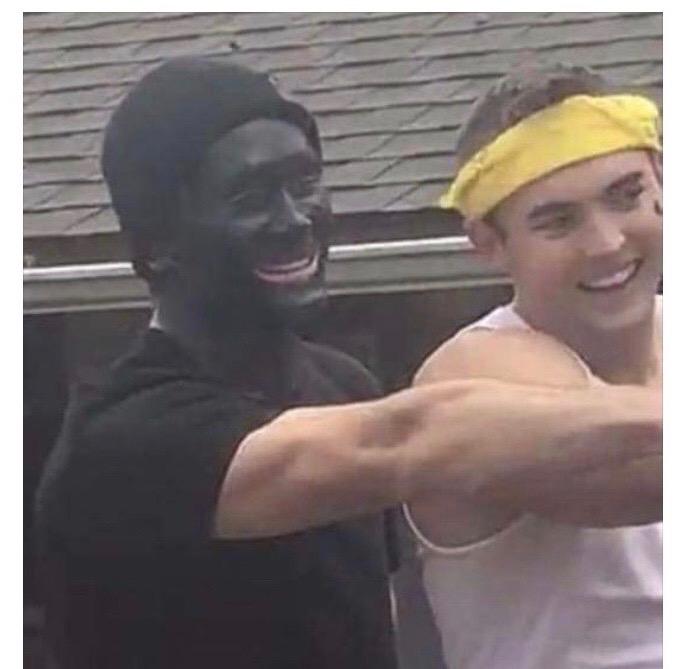 On Sunday, the chapter also released a statement apologizing.

“We are extremely sorry and embarrassed for failing to recognize the racial impacts this brought forth,” the chapter said in the statement. It added: “Although it was not our intention to stir up racial tension, we understand the negative impact this picture had on our peers.”

Logan Boersma, president of the Cal Poly Lambda Chi Alpha chapter, said that the event was closed to only members of the frat. There were an estimated 60 to 70 people who attended the all-day event, which coincided with Cal Poly’s PolyCultural Weekend.
Eventgoers were in six "families" represented by a different color. One of the members of the black family wore blackface, The New York Times reports.
“I absolutely feel terrible that [the black face paint] was construed like that,” Boersma said. ”And I am fully aware that it can be insensitive.”
Although the frat released a statement apologizing for the event, this is not its first time racially insensitive incident. In 2013, the frat was criticized by women and Native American groups for an event called the "Colonial Bros and Nava-Hos" party.