They might just be a black Bill Gates in the making...or something like that. Stefanie Brown James and Quentin James are impressive individually, but combine their talents and they're a dynamic force to be reckoned with. Together they have worked as national directors for minority outreach on Presidential campaigns for both Hillary Clinton and President Barack Obama, founded a corporation dedicated to civic and community engagement, and built the grassroots organizing campaign that lead to the election of Trinidad and Tobago's Prime Minister. In their respective roles as CEO and COO of their Washington, D.C.-based startup, Vestige Strategies, Stefanie and Quentin are committed to making a difference in the environment while also empowering women and communities of color

One time for #BlackExcellence in this niche!

Photo: FoxTV The couple, who have been married for four years, attribute their collaborative success to shared core values, a strong foundational friendship and a working relationship that was established long before they even thought of dating. When the two met at a 2006 NAACP Conference in Charlotte, North Carolina, Quentin was attending as a Youth Leader while Stefanie served as National Director of the Youth & College Division for the NAACP. Impressed by a dynamic speech she had given to the general assembly, Quentin introduced himself to Stefanie
From there they maintained a mentorship relationship. "We kept in touch and literally just had a friendship, a little brother/big sister kind of relationship because I'm 7 years older than him," Stefanie says. After years of keeping in contact, hanging out and working with one another at NAACP's National Headquarters in D.C., they came to the realization that their feelings for each other were evolving beyond friendship. "I think we both realized, 'okay, maybe there's something here,'" Stefanie says. The two began dating in 2008, and four years later they were married. Last year, they became parents to a son named Carter
In addition to being the epitome of #relationshipgoals, they have maintained unrelenting focus on their individual and collective goals. Currently partnering with BET's Vote 2016 campaign on an 11-city Changing the Climate Tour, we recently caught up with the Howard University alumni power couple to discuss careers, ambitions and their flourishing relationship 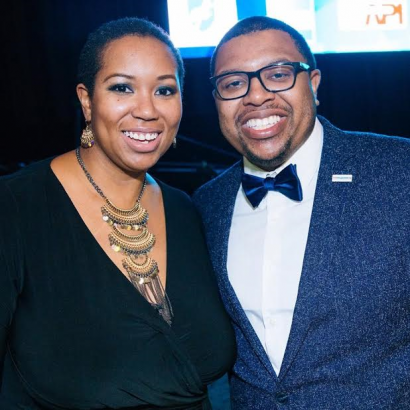 Photo: colemanentertainmentgroup.com Blavity: With all that you have going on, how do you balance it all? S: That’s a daily question for us. To be honest, aside from literally Jesus, we really have an awesome support network of family that allows us to do what we do. In January of 2015, when we found out that we were having a baby, we were living in a 2-bedroom apartment right outside of D.C. and it was like, in that moment life automatically changed because we knew the type of lifestyle we wanted provide for our son, and that required us to really think about our support system. We decided to move to my hometown, Cleveland, which is where we live now
Q: I wanted my child to have backyard and to know what a park is...I wanted him to grow up how I grew up in the south and knowing family. Our parents are great but we also have auntie’s and uncles and cousins who are here, so I just could not imagine our child not growing up with that around them
B: How are you adjusting to that move from the nation's capital to the Midwest? Q: It’s been a big adjustment. I think with our generation, we want to be in the big city that’s on fire, whether it’s New York, D.C., Atlanta or L.A. So, to tell your friends, "I’m moving to Cleveland," the responses are like, "What? Why?" The sacrifice has been real in terms of relationship and lifestyle. We don’t go out as much as we used to. Not just because of the baby, but the social scene is different here. Cleveland is a hard-working, very prideful town – very blue collar, and so that kind of delineation has been a little eye-opening, but not in a negative sense. In the sense of just making us a little more focused on our work and focused on our company and how we want it to evolve
So, a little bit of a shock at first but I think that these are the kind of sacrifices you have to make if you want to be successful in the 21st century. It’s great to live in D.C. but we bought a 4-bedroom house (in Cleveland) and our mortgage is less than our rent was for our two-bedroom apartment (in D.C.), and so those kinds of opportunities also exist 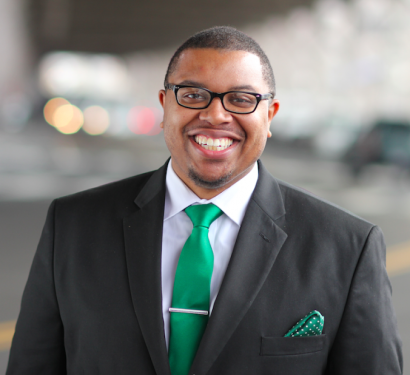 Photo: colemanentertainmentgroup.com B: The two of you have been extremely effective in organizing communities of color toward civic engagement. What has been the key to that success? S: Both Quentin and I have been active in the NAACP since the age of 14 years old, so that provided a strong foundation, and also I would just say, nothing beats feet on the ground. Nothing beats person-to-person contact, especially with black people. We are relational people. Don't send me a tweet if there's a point you want to get across to me, call me if you have a point, come knock on my door. I just think you can't underestimate the power of direct communication and face-to-face and putting in the time and the work
So much of the work we've done is not sexy, it's not fast and it's not easy, but it is totally rewarding and it's purposeful. It's about building relationships and empowering people to change their own lives where they are. I think a lot of that power gets lost when you don't help connect the dots for folks. If you give people the tools, the resources and the encouragement to say, "look, these are the steps you can take to talk to your city councilman, to be able to have something placed on the agenda for the city council meeting to get something changed." That's what we're really focused on 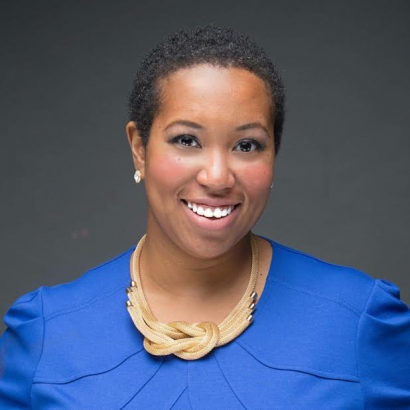 Photo: colemanentertainmentgroup.com B: What was the motivation behind Vestige Strategies? Q: We were both doing a bunch of community engagement work in our professions, but not necessarily being able to lead that work from A to Z. Having to work on different teams and across organizational politics, what we realized is that because of bureaucracy and money and everything else that goes into working within organizations, a lot of times the end result — what the community got out of the work — wasn't always as beneficial as we felt it could be. We started Vestige to engage directly with the three C's: candidates, companies and causes, who are looking for advice on how to engage black millennials, the church community and also black women who are the most civically engaged demographic in the country. Through Vestige we work with those folks to provide those kinds of strategies from a company perspective
B: What has been the biggest lesson for the two of you in business partnership? S: We are both doers, but we had to come to terms with the fact that we can't do everything. Especially now being parents. I have had to become more comfortable with delegating. I struggle with feeling as though I'm not there enough for my son, or maybe I'm not putting my wife hat on for my husband. I can do all of those things better if I am able to let go of the reigns and empower other people do their part
Communication is another thing that I can't stress enough. Quentin is great at making sure we're constantly checking in with each other and I am a quick mover, but I have realized the importance of checking in and making sure we're doing the right things
Also, having very clear roles and responsibilities in both our personal and professional lives. For example, our son Carter wakes up at 6 a.m. on the dot, so we have scheduled who wakes up with him when. So Quentin wakes up with him Monday, Wednesday, Friday, and I do Tuesday, Thursday, Saturday. We have schedules for everything and it just helps us to be able to manage our lives 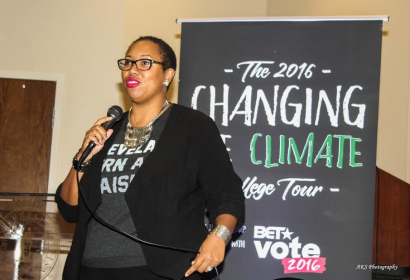 Photo: colemanentertainmentgroup.com B: The initial stages of a startup can be rocky. How have the two of you managed it? Q: You're definitely right in that assessment. We had to kind of crawl into it. So, in the initial stages when we started off in 2012-2013, we alternated. One of us always had to have a full-time job to make sure we had insurance and a steady income, while the other kind of ventured off to do other projects. We grew the business in a steady slow way so that we could eventually both become full-time partners with the firm, but at the same time being able to service our clients in a way that they felt supported and engaged as well
Fast forward to 2015, we got our largest project to date when we were hired on the Prime Minister's race in Trinidad and Tobago. We landed that contract as small boutique minority-owned firm. We went up and competed against a prominent, established firm that everyone knows within the political space. With that contract, we were able to hire on a team of about twenty consultants to take down to Trinidad and work on a campaign that allowed us both to become full time staff with the firm. We were successful in that campaign to elect a Prime Minister of a nation and so that was definitely a watershed moment that let us know "this is working, this is real, this is powerful, let's keep doing it." 2015, I think, was the magical moment for our firm 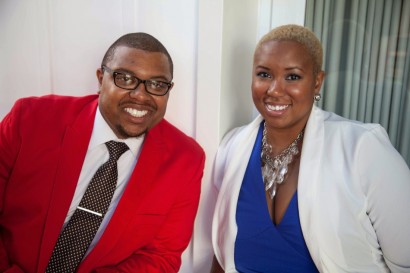 Photo: stefaniebrownjames.com In addition to running Vestige Strategies, the two have maintained independent ventures. Stefanie is founder and Executive Director of Brown Girls Lead, Inc. — a leadership development organization focused on helping collegiate and professional women cultivate the skills they need to effect positive social change on their campuses and in their communities. Quentin is the founder of The Collective PAC, a political action committee focused on building black political power by electing black candidates on the local, state and federal level. He is also the co-founder of Inclusv, a diversity hiring initiative that places talented staffers of color into campaigns and advocacy organizations throughout the nation
Their admiration, respect and love for one another comes across clearly as they revisit the highlights of their lives together, but make no mistake, it's not all business for the couple. They make it perfectly clear that they can go from chill mode to turn up at a moments notice. "Last night was a big sports night for Cleveland, so we were out downtown and when it's time to get hype, I'm listening to Young M.A., but today on the road we'll be listening to Solange," says Quentin. That sounds about right


Stay connected to all things Black Twitter, news and the best content on the Internet by signing up for Blavity's daily newsletter.