Have you ever been to a comedy show where the walls were lined with sex toys? We have. At Feelmore510, a black-owned sex shop in downtown Oakland, monthly comedy nights are just one of the many ways owner Nenna Joiner connects with her community. Feelmore has hosted political events, fundraising nights and even paired with Walgreens to give flu shots. Joiner says it's all part of an effort to live up to the store's tagline: "It's more than just sex." Blavity sat down with Joiner to discuss her community-minded business model, the perseverance required of black entrepreneurs and what it means to embrace black female sexuality. 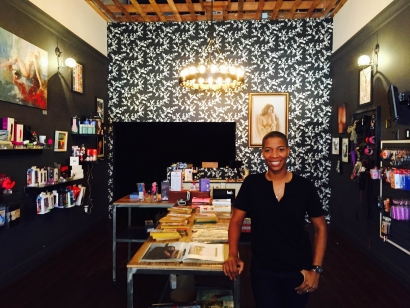 Nenna Joiner, owner of Feelmore510 Blavity: How did you get into this line of work? Nenna Joiner: My aunt worked for San Francisco AIDS Health Foundation. She had young kids, so she would teach them about sex, and I was like 19 or 20 coming from my home in Las Vegas where we didn't talk about body. So she gave me a book about the sexual anatomy of a woman. That lead me to go into our local sex shop. I looked around, and I was like, "Oh, this is cool, but this is not really where I want to shop on a consistent basis." That wasn't really my idea of what a sex shop should look like
I think people should be dressed up when you're selling sex. I think you should be sexy when you're selling sex. So that, and then going into sex shops and seeing different things that people had and thinking, "Oh if I had that, this is what I'd do," and basically playing out my vision in my mind even before I had it
B: Are there many black women in the sex toy industry? NJ: No. I went to the Adult Video Network convention in Las Vegas to do research before I opened. They had two huge convention centers — one was all video and the other one was novelty. I went up to the adult video part and there were some people of color, but they were starring in and directing the films. And that is not the bulk of the money because there's no ownership. So I went down to the novelty center, and there were not many blacks. I mean, one or two in the whole thing. And I said, "this is where I need to be." On the business side of it
B: What kind of obstacles did you face opening the store? NJ: Always money. I think African Americans traditionally have had issues with loans. So I had to use my own money and I was as frugal as I possibly could be. Like I got this desk off of Craigslist for $100. But the main obstacle was finding a person who would rent to me because if your business doesn't have a reputation — good or bad — no one can find you, no one can see what your vision really looks like. I actually went through 40 'no's, to get one 'yes.' And this building is owned by an African-American man
The second thing — because of the type of business — was making sure it was zoned appropriately. We had to go through a lot, because a lot of people were opposed to us coming in. During my presentation to the city, it was a packed room. It felt like a club in there, because people were coming to speak out against me. People came in saying, "Oh, she's gonna be sex trafficking kids," and all this kind of stuff. I mean, it was just bad, as if I was pimping and pandering. And again, that's because nobody knew the vision. And when people don't trust your vision, they're going to oppose you 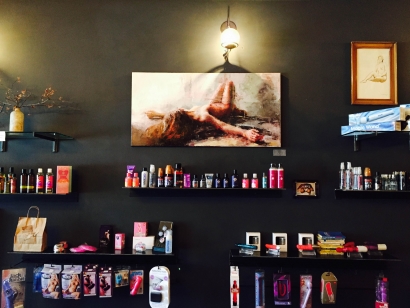 Inside Feelmore 510   B: What does it feel like selling sex? NJ: The feeling of selling sex as a black person, for me, is about empowerment. Because I'm in this industry, I still get laughed at. I still get stigmatized and ostracized. I think for anybody wanting to get into this business, you have to be very confident in yourself. I mean, I honestly had to pray about opening a sex store. It was important because I did not want to — you know how you can get into a situation and think, "Should I have done that?" I don't have that
Society boxes people. Information will f*ck with you to the point where you start to denounce your dreams and what you really, really want to do. And there's just so much empowerment around owning your choices and being okay. Having a resolve around what you set out to do
B: As black women, we're told that our bodies are inherently sexual. We're depicted in media as hypersexualized, and our bodies are used as props by musicians. Do these narratives factor into your line of work? NJ: I think the black body, in general, has always been policed or highly laughed at if you will. One thing we do — so you look around at the product boxes in here and you won't see people on there. Here, you'll see the colors of the products, but most sex shops will have people on there. We take items out of those kinds of boxes, so you don't have this objectivity of body. I want someone to feel empowered by picking something up. I don't want them to feel disempowered as they're reaching for a product and there's an image of a person on the box that does not look anything like them. And I'm not just saying race, but also with body image — thinness, thickness or whatever it is. We don't want people thinking they're not adequate
B: What advice would you give to black women when it comes to embracing their sexuality? NJ: You could either own a home or you're renting. And so the idea is, where are you in your sexuality? Are you owning the home, or are you renting it? Sex, I think, is about creativity. It's not about body. People will pick up products and say, "Well how do I use it?" And I'm like, "However you want to use it!" You take it home and it's up to your imagination. The true normal is, you might put it under your armpit and get off better. I think people are just so stuck. We're so stuck in thinking that sex is just right between the apex of the legs, and not really exploring the entire body
And know your points. Sex gets bad when we start to close up. We start to remember our trauma. And I think it's there where the work needs to be — around our trauma. It may be sexual trauma or it could be life trauma, but we just need to check ourselves and say, "This makes me feel good, this doesn't make me feel good," or, "This makes me feel slutty — I still like it." And take ownership of that. And know that with each age, and each day, as you progress as a person — your sex is going to get better. But it's only going to get better as long as you're open to getting better in life. [And with the code BLA510 Blavity readers will receive 15% off their purchase during the month of October.] 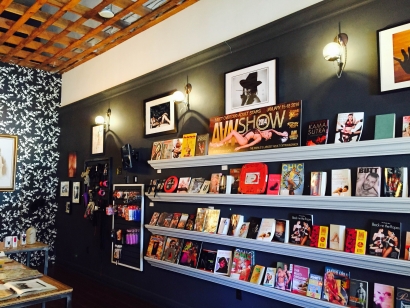 Inside Feelmore 510   B: I noticed you have events, such as comedy nights. How did you decide to do that? NJ: In the beginning, I did so many events to create context around the store and what we're about. The tagline is: "It's more than just sex." We've done flu shots in here with Walgreens, we've had political events in here, fundraising events. We also had a panel called "Ask a Ho" here, and it was around sex workers. We wanted to hear their experiences and it was a packed house
It's just about doing stuff out in the community, because it's really hard to get out there to speak about sex, other than about prevention. It's great to speak about HIV, but the joy of sex is something different. So what we wanted to do was create a novelty around some of the events that we have that make people talk about it, and doing those kind of things where we're not just doing sex stuff. People can find anything here — they're like "Comedy? You got comedy in here? I can get condoms and comedy?"   B: What other plans do you have for the store? What does the future of Feelmore look like? NJ: We definitely want to franchise and open more stores. I would like to get more African Americans in on franchising the business because I think it would be powerful in our communities. But we also have to come with a brand that shows the community what we're about and how we're going to operate in the community. It's about being a part of the city and being a community person — knowing it's not just about sex


Inspired? Intrigued? Aroused? Share your reactions in the comments below.