Two New Bills Would Get Rid Of All Confederate Monuments In The U.S. Capitol

There are no statues of King George III in the U.S. Capitol.

There are no statues of General Cornwallis.

But there are statues of 12 men from a foreign power that tried its very best to destroy the United States.

There are 12 statues of high ranking members of the Confederate States of America. I just introduced the Confederate Monument Removal Act. Men who fought to preserve slavery shouldn't be honored in the US Capitol. pic.twitter.com/jwqxIPo474

Both versions of the legislation are called the Confederate Monument Removal Act, and if passed, both would require that all 12 statues be removed from display in the U.S. Capitol’s National Statuary Hall Collection within 120 days.

“In the wake of Charlottesville, it’s abundantly clear that much work remains to root out racism from our society,” Lee said, according to the Washington Post. “Confederate statues and monuments pay tribute to white supremacy and slavery in public spaces. These hateful symbols should have no place in our society, and they certainly should not be enshrined in the U.S. Capitol.”

“The National Statuary Hall Collection is intended to honor America patriots who served, sacrificed or made tremendous contributions to our nation,” Booker said. “Those who committed treason against the United States of America and led our nation into its most painful and bloody war are not patriots and should not be afforded such a rare honor in this sacred space.”

A few of the Confederate States of America officials with statues in the Capitol include:

Jefferson Davis, the president of the CSA, who said in that role, “We are not fighting for slavery. We are fighting for independence.” 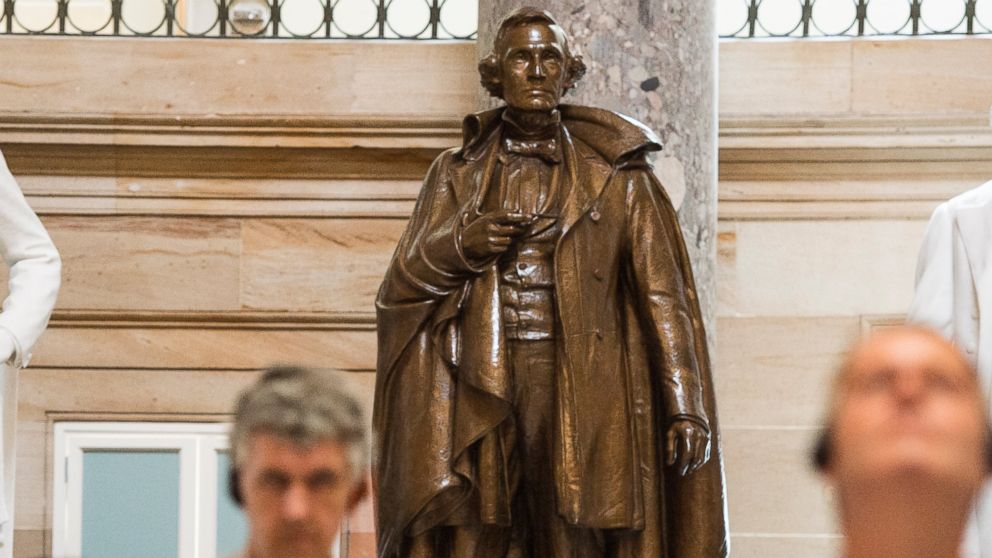 General Robert E. Lee, who lead the CSA forces against the USA. After the war, Lee felt that Civil War monuments were a bad idea, “I think it wiser, moreover, not to keep open the sores of war, but to follow the example of those nations who endeavored to obliterate the marks of civil strife.”

Alexander Hamilton Stephens, vice president of the Confederate States of America. Of the CSA he said in a famous speech, “Our new government is founded upon exactly [this] idea … that the Negro is not equal to the white man; that slavery — subordination to the superior race — is his natural and normal condition.”

The National Statuary Gallery was created to honor “illustrious” Americans who served or sacrificed their lived for the United States.

Because of this, proponents of the new bills say that the statues of those who founded the Confederate States and took up arms against the United States have no place there.

The bills do, however, assign historical value to the statues and say that states ought to be allowed to claim them if they so chose.

Any unclaimed statues would then be given to the Smithsonian for safe keeping.