On Monday, Apple hosted its annual Worldwide Developers Conference (WWDC), in which it showcases new projects and software coming to its devices. We learned about things such as Siri coming to the Mac, full-screen effects and iMessage apps. However, one particular melanated Apple executive with natural locs stole the show! Bozoma Saint John is a rockstar. She led Pepsi-Cola North America’s music and entertainment marketing group, and in 2014 she was named the head of global marketing for Beats Music (now Apple Music). Don't get it confused, she was awesome before Apple, netting Pepsi endorsements from artists such as Nicki Minaj and Kanye West, and getting Pepsi sponsorship at The Grammys, the Super Bowl and more. She wasn't named one of Billboard's Top Women in Music or an ADCOLOR Rockstar honoree for nothing!

Photo: Billboard In a feature with XO Necole, we learned that Bozoma is all about crafting authentic messages that are relevant to today's culture. That Apple Music ad with Kerry, Taraji and Mary J? Yep, she was behind the scenes of that. As a single mother of West African descent who lost her husband to cancer, yet still relocated to L.A. for this Apple Music gig, Bozoma is the epitome of #BlackGirlMagic 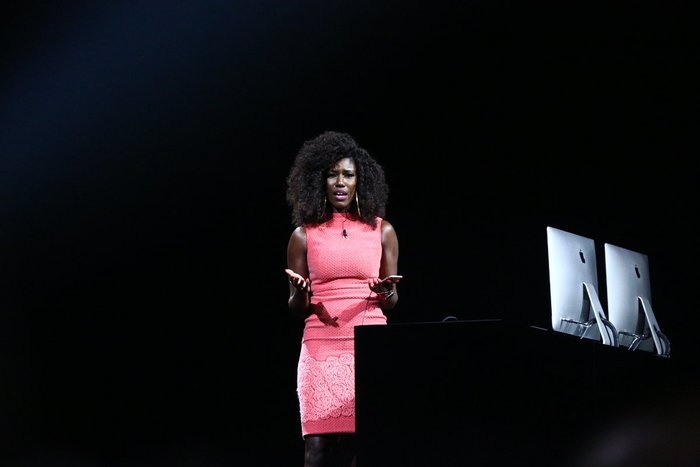 Photo: Twitter / @panzer That magic was extra bright today as she took the spotlight at the keynote address:

She got in formation and was ready for this moment.

Glory and honor and praise to the Most High. I'm ready. #Apple #WWDC #AppleMusic #AppleNews pic.twitter.com/z94Lr4PLbN

She took the stage as a woman of color, speaking on behalf of one of the biggest brands in the world.

She presented the new features for Apple Music, including its new interface. The best part? She used Ghanaian music.

Yo, other companies take notes of this at #WWDC. I've said it once, I'll say it again...REPRESENTATION MATTERS. pic.twitter.com/2CiRYGxHgY — Iheanyi Ekechukwu (@kwuchu) June 13, 2016

...and she was standing up there as herself, unapologetically.

She needs to be a brand spokesperson at this point. Let's see her more.

Apple, I beg of you, do not let this be the last we see of Bozoma on a platform like this! We need more!