Why the new blue ranger thinks nerds and racebending are good.

90s nostalgia has been in the air since the release of Saban's Power Rangers last weekend.

The movie is a fast-paced origin story of how the Rangers — Jason, Billy, Trini, Kimberly and Zack — gain their powers and work to defeat  Rita Repulsa. Last year, when the cast was revealed and the first images and trailers for the film were released, fans were divided. While some were glad that the Black Ranger was not of African descent, and the yellow ranger not of Asian descent, many thought this was a missed opportunity at a nod to the series’ history of Trini and Zack being black and Asian.

For Power Rangers buffs, we remember Zachary “Zack” Taylor as the “cool guy” of Angel Grove High School. He was very popular and a prankster among his friends. He was into hip-hop and even had his own fighting style called the Hip Hop Kido, which he taught. At times he could be hot-headed, but always danced his way back into his groove.

You also may remember Billy Cranston, the Blue Ranger, was typecast as the stereotypical “nerd,” who initially felt insecure in himself at the beginning of the series. His intelligence proved to be, arguably, his greatest asset to his team.

So of course, when RJ Cyler was cast as Billy, racebending the character, fans were divided on whether we should have gotten a black Zack, or welcome Billy as a blerd.

The diversity effort for the film was expert-level from the jump, as Jason (Dacre Montgomery) was the only character who wasn’t racebent, with Latina singer/actress Becky G as Trini, Asian actor Ludi Lin as Zack and actress/singer Naomi Scott, who is half Gujarati Indian, as Kimberly. In addition, Becky G as Trini serves as the first LGBT Power Ranger, and RJ Cyler as Billy is the first autistic Power Ranger. These were character traits not present in the first season and first feature film. Not only that, but Trini and Billy are the first queer and autistic superheroes on the big screen. I saw Power Rangers in theaters last week, and on all fronts, I was pleasantly surprised with the outcome of the film — particularly with the decision to have Billy portrayed by a black actor. While Zack is one of the most notable black characters from the 90s and our millennial childhoods, now more than ever, we know that representation matters. From young black kids who are just being introduced to Power Rangers now, to us as black millennials reliving our younger days, I’m more than positive that many of us will see ourselves in Billy.

I talked with Cyler about the decision to racebend the characters for the film, Billy’s position among the previous black rangers and more.

Fans and newcomers of Power Rangers alike have generally received the film with open arms. I asked Cyler his thoughts on whether or not he and the cast believed that the movie would be as well-received as it was. “You can never know to expect,” he said. “It’s definitely something we strive for and we took very seriously when it came to building these characters and these relationships between the audience and the screen. It was something that our director wanted to make sure — we stayed true and honest to the message that anybody can be anything that they wanna be. Everyone is great in their own way. It doesn’t matter what you look like and where you come from.” 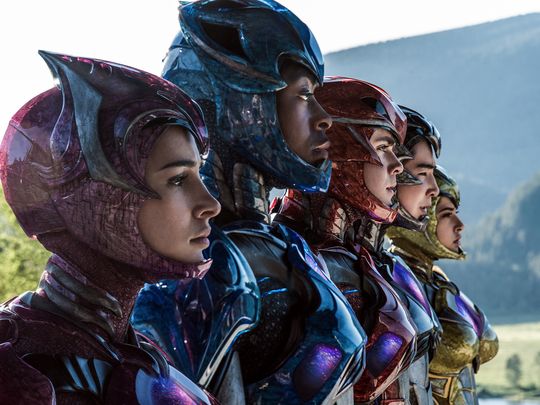 That’s what Cyler feels resonated with people the most. “Everyone in their own mind is a hero. In this movie, we’re agreeing with everyone — know you are a hero, you are the greatest, you are a queen, you are a king,” he said.

On racebending the majority of the rangers, with Billy being the most notable, Cyler said, “I feel like that was one of the best decisions they made in this franchise. When we first got the script, they didn’t list the ethnicity or any type of look...it was just the characteristics of these characters. In my case, Billy was socially awkward and on the spectrum, so it didn’t matter if I was black or white. Kimberly and Trini, Nay Nay (Naomi Scott) and Becky, they both auditioned for each other’s ranger.”

For all the folks who think that the Black Ranger should have been black, Cyler sees this in a different light. “I didn’t see it as ‘Oh they’re taking the Black Ranger away from the black people.' If we were all colorblind, nobody would give a f*ck.” It's also noteworthy to mention that our beloved Zack and Trini also handed the franchise some steep criticism originally, as the rangers appeared to be given armor color based on the color of their skin. Would that be received well in 2017?"

With the role of Billy comes a huge responsibility and title for Cyler. Now he stands alongside classic black power rangers like Zack and Aisha (the second yellow ranger after Trini’s departure). How will the ‘new’ Billy fit in Ranger history alongside the others? “I think Billy is another part of this perfect puzzle,” said Cyler. “Billy is the nerd of the three, we’ve got the cool, we’ve got the sass and we have the nerd — the crazy brains.”

A new character trait for the character of Billy was his autism. While talking to Cyler, it was clear that he was super careful and delicate in his approach to that aspect. “I just got rid of everything I thought about the spectrum and autism. That’s the first step in tarnishing something that’s pure, right? Making our own notes. It was important to first put myself in a mindset of just learning. I wanted to do it justice so no one thought that this was my rendition of what I think that people with autism feel or go through. I wanted it to be honest where I knew exactly what I was doing."

It’s very possible in coming years, as the new Power Rangers franchise continues, that Billy will be a crucial representation for autistic people of color in entertainment. In recent years, celebrities like Holly Robinson Peete, Toni Braxton and Tisha Campbell-Martin have been advocates for autism after their children were diagnosed.

While blerds in specific may identify most closely with Billy, a major theme of the film is opening up outside of your comfort zone — a theme throughout the Power Rangers since their 1993 inception.

For this new franchise, it’s the same. That’s what Cyler wants people to take from the film the most. “Billy had to step out of his comfort zone, being by himself after his father passed,” said Cyler. As human beings, we feel like we can take care of everything our damn selves, and 9 times out of 10, we can’t. We always need someone else or someone to call to calm us down or make us happy. Billy took that chance in Jason. He was just like, 'well I don’t have anybody else, but I'll take this chance right now because I’m hurting.'"

At the end of the day, it’s about looking out for each other, and according to Cyler, "trusting other people to come in a little bit.” He continued to say, "They don't have to be all in your bubble or all in your face, but it’s nothing like making the next person smile by saying, ‘what’s up,’ ‘hello,’ or 'how’s your day?'"

Both 2016 and 2017 (so far) have somewhat been renaissances for black entertainment. From Atlanta to Black-ish, we're seeing diverse representations of black people in film and television that we didn't see 20 years ago. While you're making lists to include Hidden Figures, Moonlight and more in your lists of the best films that give different aspects of black life, let's not forget that in Power Rangers, Billy counters anything that we thought should have been represented in a black ranger.

You can catch Power Rangers in theaters now.