Exclusive: Stacey Abrams On Her New Children’s Book And Campaign For Governor

The voting rights advocate and author spoke to Blavity about her new book based on her childhood, her political future and why every day is an opportunity to make a difference.

Stacey Abrams has been incredibly busy. The former Georgia state representative and 2018 candidate for governor has spent the last few years organizing and is perhaps the country’s most prominent voting rights advocate. She was shortlisted as a potential running mate for candidate Joe Biden during the 2020 presidential race. She even played a small but key role in popularizing and legitimizing the Verzuz phenomenon that emerged last year. But next year is shaping up to be an even more momentous year for Abrams; as Blavity previously reported, Abrams recently announced that she will again be running for governor of Georgia.

Amid all of her other endeavors, Abrams also enjoys a successful career as an author, with New York Times bestsellers among her various novels and nonfiction works. Now, she is trying her hand at a new genre with her first illustrated children’s book, Stacey’s Extraordinary Words. Abrams recently spoke with Blavity about her new book, as well as her new run for governor and how we should all stand up for people every day.

We began the conversation discussing why Abrams decided to run for governor of Georgia again.

“We need leadership that actually intends to invest in all of the people of Georgia,” Abrams said, citing what she calls failures of the current governor to handle the pandemic and provide adequate health care and educational opportunities for Georgians. “I want to serve, and so, I’m running for governor.”

Focusing on her new book, Abrams talked about why she decided to publish a children’s book now.

“I’ve always loved books since I was a kid, and particularly, I respect and admire children’s literature,” she said.

Abrams decided to use her own story, partnering with Kitt Thomas, “a remarkable illustrator” whose vibrant images accompany Abrams' words throughout the book. It was Thomas’ “ability to take these ideas I have and to turn them into such beautifully rendered images” that has helped Abrams tell her story. 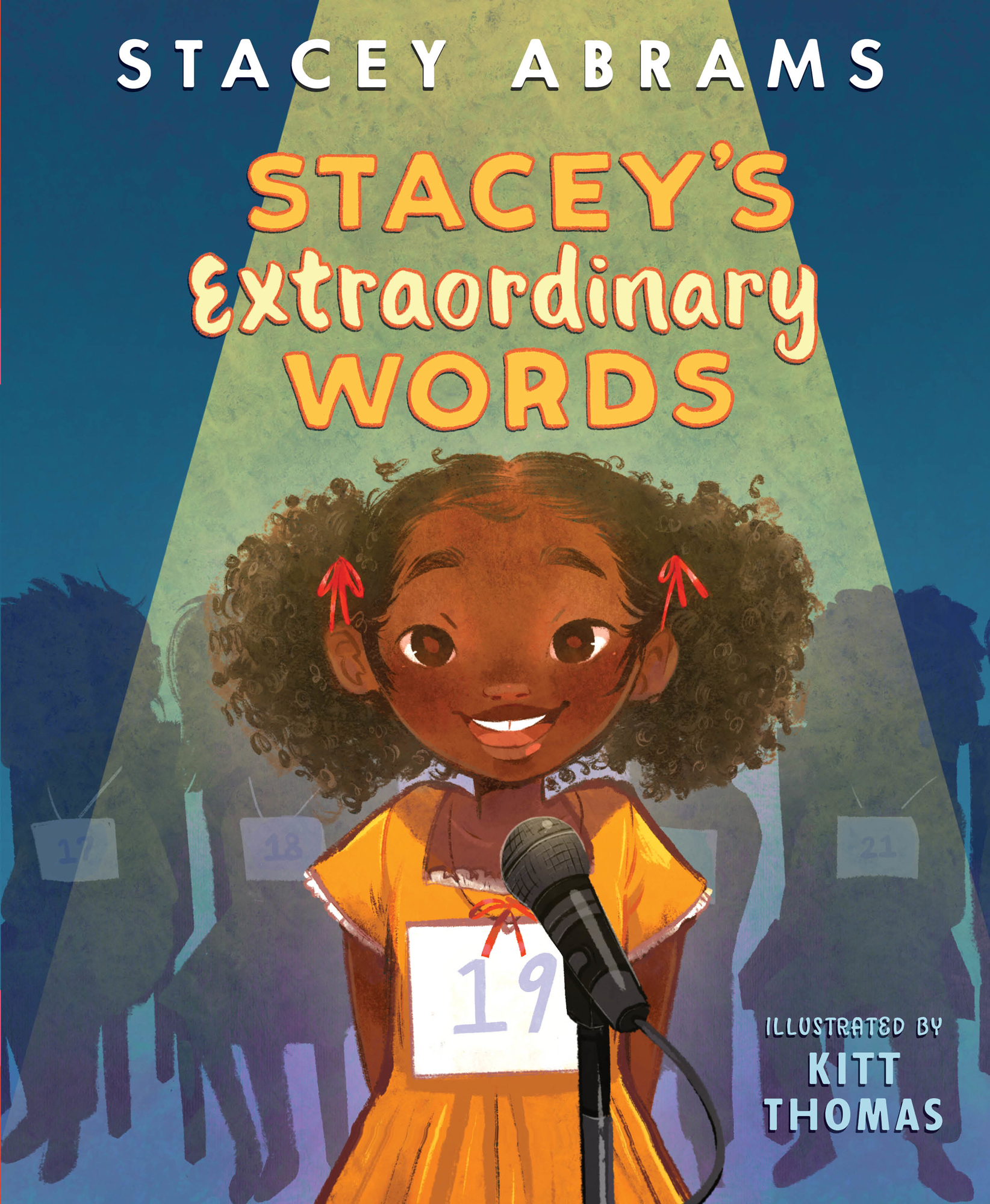 Stacey’s Extraordinary Words focuses on a young Abrams developing her love for words and reading. The story is drawn from Abrams' actual childhood, growing up in Gulfport, Mississippi.

“My mother is a librarian by trade,” she told Blavity as she explained the origin of her lifelong love for books. She recalls taking naps in the stacks of the library where her mother worked. “I literally grew up surrounded by books,” she said.

In Stacey’s Extraordinary Words, her love for books culminates in little Stacey participating in her school’s spelling bee. In the end, little Stacey loses to Jake, a school bully, but she is able to stand up to her adversary and pledges to keep going.

Abrams told Blavity that the book points toward two lessons. The first is that “we can prepare and we can do everything we should, but that doesn’t mean the outcome will be the storybook ending that we’re taught to expect,” she said. These setbacks, however, are “not a reason to give up, and so the goal is to offer kids this very strong insight into how we can be resilient.”

Secondly, Abrams explained that the book is “also about how words can be our friend.” She elaborated by saying that “it’s not just the stories they tell, but it’s the words themselves that can help us shape and frame who we want to be.”

In the book, Abrams uses the difference in the way in which little Stacey and Jake the bully use words to highlight the responsibilities that we have. “We have to be very intentional about what we say, how we say it and to whom we communicate,” Abrams told Blavity. At the same time, Abrams holds that ”we also have to be forgiving” when people unintentionally use their words in harmful ways. “I try my best to create space for people who are trying to communicate but don’t quite do it the way they should.”

Abrams told Blavity an additional anecdote from her childhood that shaped her decision to write the book. She recalled befriending a young girl who had come to Mississippi as a refugee from Vietnam. Abrams would often read with her friend, who was picked on by other students because of her lack of English skills. Thirty years later, this former childhood friend wrote a letter to Abrams explaining how her friendship with Abrams served as an inspiration for her to become a teacher. “Words matter,” Abrams said, “and even the words you’re not paying attention to are affecting someone else.”

As for her own path over the years, Abrams insisted that she had no idea as a child where her career would take her. “This has all been an incredible surprise,” Abrams said, crediting her success to her parents teaching her “to believe that my dreams could be made manifest and that I should never deny myself a chance to try.”

Stacey’s Extraordinary Words ends with Abrams’ mother comforting her over her loss by saying, “There’s always next year,” and little Stacey confidently correcting her in the story’s final words: “No, Momma, there’s always tomorrow.” Abrams said that this is the lesson that has shaped her actions since narrowly losing the governor’s race in 2018. “I’ve spent 2018 and 2019 and 2020 and 2021 doing the things that I thought needed to be done.” For herself and her readers, “every day is a day to be obliged to be good, every day is a day to try to be better.”

For Abrams, this push to be better includes the current fight for voting rights being waged in Georgia and in Washington, D.C. “We are in a fight for our democracy,” she said, urging Congress to take action on the Freedom to Vote Act and the John R. Lewis Voting Rights Advancement Act, both of which remain stalled in the U.S. Senate.

Regarding her new book, Abrams had this message for children who see themselves in her younger self: “Words are our friends. Sometimes they can be hard, and they can seem mean when someone uses them against you, but words can be a shield and a protector.” She added that “more than anything, who you are and the way you use your words can make the world better.”

Stacey’s Extraordinary Words is being published by HarperCollins Publishers. The book is available for preorder now and will be officially released on Dec. 28.