This is the real cost families pay for mass incarceration

"You do the crime, you do the time." That old saying suggests that the time someone spends incarcerated is purposed to balance out the fact that he or she did something illegal. When the time is up, the punishment should be too. In a perfect system, at the end of the sentence, the perpetrator would feel as though the time away from society yielded enough time for reflection on past mistakes to prepare for a positive return to society. But, our correctional system is not functioning in its most altruistic state. That would entail extending fair punishments to individuals without harm to others. A new report shows that the families of those incarcerated pay for their sentences both emotionally and financially, even after their loved ones re-enter society. The Ella Baker Center for Human Rights, Forward Together, and Research Action Design released Who Pays? The True Cost of Incarceration on Families, a comprehensive, community-driven research project that surveyed the monetary and emotional consequences of mass incarceration on the formerly incarcerated and their families. They surveyed 712 incarcerated people, 368 family members of the formerly incarcerated, employers and focus groups. The report touches on the effects of our criminal justice system on all people: black, white, male, female, transgender, Latino, etc. The report places gripping anecdotes from the formerly incarcerated and their family members who really make you empathize with their realities.

Mass incarceration is expensive. The report estimates that the total spent annually to fund incarceration is $80 billion dollars. Of that money, $50 billion of it falls on state funding. This is why so many states have privatized prisons and cut funding to preventative programs — their resources are drained by mass incarceration. Cities are desperate for funding too and contribute to the expansion of mass incarceration because of it
The report focuses on the fact that families pay for mass incarceration too, and not just financially. It shows that in 63 percent of cases, family members were responsible for court-related expenses. Of those family members who funded these costs, 83 percent were women. It’s important to note that in the findings from this report, well over half the men in both federal prison and correctional facilities between the ages of 33-40 are parents, leaving a lot of single mothers left to fend for their families alone. Families help pay for everything from commissary to phone calls and in some cases they incur fines for background checks needed before granted visitation privileges 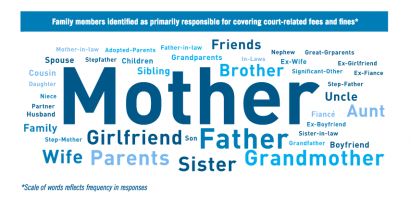 Photo: www.whopaysreport.org   The systemic poison seeps into the roots of the family tree, ripping it apart branch by branch, a process that doesn’t necessarily end once formerly incarcerated people re-enter society. Mass incarceration began with the influx of the cycle of poverty, and the report sites incarceration as both a predictor and consequence of poverty. The report estimates that 40 percent of crimes are directly linked to poverty and about two-thirds of those in jail reported incomes below the poverty line. So, what happens when poor individuals are incarcerated and expected to pay fines incurred through the criminal justice system? What happens when the reality is that 48 percent of families who try to help their incarcerated loved ones are unable to afford the costs associated with a conviction? What happens to the 77 million Americans with criminal records upon release as they try to pay back family and criminal justice debts and support themselves as working adults? The poverty cycle repeats
The report reveals that 60 percent of formerly incarcerated people remain jobless for one year after release, which some consider to be the most common year for recidivism (a National Institute of Justice survey found 56.7 percent of their pool were re-arrested in the first year after release)
Those lucky enough to get a job are often paid 20 percent less than someone without a criminal record, and formerly incarcerated white people will make 2x more than a formerly incarcerated black or Latino employee. Nearly half of the formerly incarcerated people surveyed for the study reported experiencing some form of employer mistreatment, including wrongful termination (25 percent), wage theft (16 percent), wage discrimination (14 percent) and employee abuse (15 percent)
Criminal records also prevent formerly incarcerated people from getting public housing. If they’re in the percentage who can't get a job, then some are forced into homelessness for lack of opportunity.  Eight in 10 people in this study reported being denied housing because of their record.  The report goes on to detail the effects these financial struggles have on family health, parent-child relationships and education

WHAT CAN BE DONE?

The report includes a three-step plan based on recommendations from families in the survey. Those interviews correlate with the data that advocates for  policies and programs that create more stability and security for those that “face intergenerational consequences from 40 years of short-sighted and devastating criminal justice policies.” I would add to their suggestions the importance of reforming how mass incarceration is portrayed in the media and on television. This week, Empire began with a #FreeLucious rally, during which an emcee fired off a statistic that 1.68 million black men are incarcerated today. Cookie continued the rally in support for her ex-husband, asking, "How much longer are they going to treat us like animals? The American correctional system is built on the back of our brothers, our fathers, and our sons. It is a system that must be dismantled piece by piece." I was especially frustrated by the fact that Cookie (especially as a formerly incarcerated woman) forgot to mention the daughters, grandmothers, sisters, relatives and families that are affected directly and by association with mass incarceration. How could they leave out the women who are affected by our criminal justice system? Especially when the report cites them as the primary source of funding for incarcerated family members. Attitudes like the one portrayed on Empire validate the importance of the Who Pays? report


surprised about any stats above? share in the comments below!