The story of a weekend trip to Tampa caused quite the commotion on black Twitter last night. For about an hour, Aziah King (@_zolarmoon) told the world an epic story involving sex work and attempted suicide. Eventually making its way to mainstream Twitter, 'Zola' trended worldwide for hours. She gained thousands of followers and has many major publications sharing her thread of tweets and the reactions that manifested
https://twitter.com/GeauxNadj/status/659262720202530816

King's ability to tell this story while utilizing humor and wit in a 148-tweet thread is brilliant.

https://twitter.com/NathanZed/status/659442990352629760 https://twitter.com/AVAETC/status/659522199091474432 https://twitter.com/ILLCapitano94/status/659372821748035584 Through the creation of memes and humorous tweets, twitter users showed their amusement. Although the narrative could be described as "colorful", many of these people are ignoring the trauma the characters of the story face. King writes of attempted murder and the dangers of sex work; two things that are very real and cause much harm 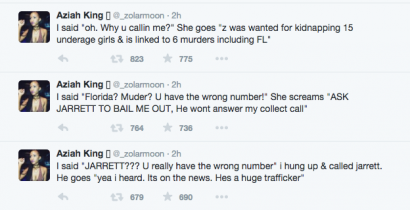 why Is this story viral?

The story of Zola discloses the cruelty and violence towards sex workers. King narrates her experience utilizing banter and wit to expose a world many of us would find traumatizing. Through out the tale she describes multiple accounts of rape, kidnapping, attempted suicide, murder, domestic abuse and assault
So why did the Black community swarm to this story and make it viral? Like King, black people have been susceptible to trauma because of the unpunished crimes and unregulated thievery that happens in our reality. Usually, when people are confronted with a tragic event, they respond with anxiety and melancholy. So often, black people are subject to violence and harassment from white America, with little to no justice served. Frequently we collectively opt to protect our mental health by engaging in humor as a form of self-care. Millions debated Rachel Dolezal claim of "blackness" by responding with #AskRachel. Just this week, Sheriff Lott's excusal of the violent behavior of Officer Fields committed towards a black child was responded with memes
In this case, King is no different and uses humor to cope with her nightmarish situation

Was your first reaction to laugh while reading this story? If so, take a second to ask yourself,  why did I find this funny instead of horrifying. Let us know in the comments below.