The weight of the n-word

I grew up privileged. I was raised in a suburb of Indianapolis called Fishers, which has been voted one of the countries safest cities multiple times
Although I’ve always lived in Fishers, I attended a private school in Indianapolis that housed grades K-8 before trekking out to the suburbs for high school. Even though my high school education was free, I still was fortunate enough to attend one of the best high schools in the state. That was the first time I was surrounded by white people
My first month there was truly a culture shock. After being in racially diverse classes for the first 14 or so years of my life, I was one of maybe two or three black students taking AP and honors courses and I hated it. I wanted to be in classes where I fit in, where teachers didn’t talk to me like I was stupid and my peers didn't assume that I didn't understand the material
My entire freshmen year and throughout my high school career, I felt like I had to choose between being an “oreo” and being black. I chose to be an Oreo, (I now know there are many ways to be black) but at the time I felt like I had no choice. Especially if I wanted to be accepted into the courses I was trying to take. So I separated myself from other black people. In doing so, I spent much of my four years hating everything that I felt made me black
In those four years I let a lot of stuff slide, but the thing I regret the most is letting people who were not black use the n-word
The word is rooted in hate. It has since been reclaimed by the people it was once used against and there is nothing wrong with that. In fact, it's dope that we've taken a word and made it a part of our culture. It no longer defines us in the negative way that it used to. My gripe with white people and their use of the word, in high school and still to this day, is the strong desire they have to say the word and the equally strong desire they have to separate themselves from "those types of people." Last week, 58-year-old Gregory Gunn, a black man, was racially profiled and killed by Aaron Smith, a white police officer of Montgomery Alabama. Gunn's only crime was walking while black. It's unbelievable. Equally unbelievable is the radio silence from my white peers in instances such as these. The same people that use the n-word consistently in my presence (and on social media) have nothing to say about the consistent slaughtering of black lives that has been happening 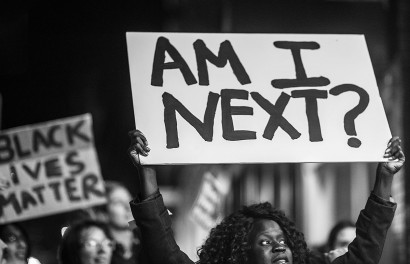 Photo: Nation Of Change I have a problem with that. You see, when you choose to say the n-word, you’re choosing to accept all the baggage and history that comes with that word. You’re saying that you understand that blacks are systemically oppressed and that the problem isn’t black on black crime or a lack of education, but that this country was quite literally built by us, but not for us. You’re saying that you understand racism is institutionalized and goes so much deeper than a white kid not wanting to play with a black kid during recess. It's not a word that is exchangeable with 'homie' or 'friend.' It's deeper than that
My only problem with this word is those who use it freely and don’t get what it means. You see, you can’t use the n-word and then say black lives don’t matter, you can’t use the n-word and then not stand up for your black friends when you see something unjust happening to them. You cannot use the n-word openly on Twitter and then have nothing to say when 12-year-old Tamir Rice, 18-year-old Mike Brown and too many others to name are getting killed every week in our country for being black
James Baldwin once said,“To be black and conscious in America is to be in a constant state of rage.” Well, here I am, 5 years removed from high school and furious. I am furious that I never spoke up and that I let that hate speech slide. That's why I'm speaking up now. I’m furious that I worry about my boyfriend walking home alone at night. I’m furious that every day it seems like another black life is lost to police brutality and racism
I’m upset, I'm pissed off and I am tired. Because all I’ve ever done is live; and somehow in America, living while black is punishable by death
What are your experiences with your peers of another race using the n-word? Share your stories in the comments below.

READ NEXT: This video will make you think about the n-word and its place in American culture