Why it was literally the best look at the gala.

Now that the dust has settled from the Met Gala madness, we need to talk about looks that deserved way more press than they received, namely Lena Waithe and Kerby Jean-Raymond's complementary zoot suits.

The theme of the evening was, “Camp: Notes on Fashion,” inspired by Susan Sontag’s 1964 essay "Notes on Camp." Sontag once described camp as a “love of the unnatural: of artifice and exaggeration … style at the expense of content.”

In other words, doing the absolute most. Hence, all of the big statement looks, flashy pieces and maximalist flair. Which makes it even more odd that despite being a culture that often "does the most" with enormous earrings, long and ornate nails, grills, intricate hairstyles and so on, Black culture was noticeably absent from this year's theme.

That is what makes the looks worn by Waithe and Jean-Raymond that much more amazing. No, they were not loud, borderline obnoxious or over the top, but they were truly camp nonetheless. And where that can be seen is in the details.

The very dapper looks, created by Black-owned luxury brand, Pyer Moss' lead, Kerby Jean-Raymond, were inspired by the culture. Jean- Raymond said of the looks, "I drew my Met Gala suit about 4 months ago. Custom silk ‘Zoot’ blazer with custom lyrical stripes from some of my favorite rappers. Each line is a bar from Nip, Pac, Jay, Nas, Drake, Meek, Cole and Kendrick. Custom buttons handled perfectly by the brother @johnnynelsonjewelry."

I drew my Met Gala suit about 4 months ago. Custom silk ‘Zoot’ blazer with custom lyrical stripes from some of my favorite rappers. Each line is a bar from Nip, Pac, Jay, Nas, Drake, Meek, Cole and Kendrick. Custom buttons by the brother @JohnnyNelson. pic.twitter.com/B8VuneBedl

Every detail of the looks was as thought out and intentional as any of the other Met Gala look — probably more so. The very stripes on Lena's suit were actually lyrics from songs, such as  Diana Ross' "I'm Coming Out" and Sylvester's "You Make Me Feel (Mighty Real)." Her Johnny Nelson jewelry buttons featured the faces of LGBTQ icons RuPaul, Dorian Corey, Freddie Pendavis, Octavia St. Laurent, Paris Dupree, Pepper LaBeija, Venus Xtravaganza, and Willi Ninja. 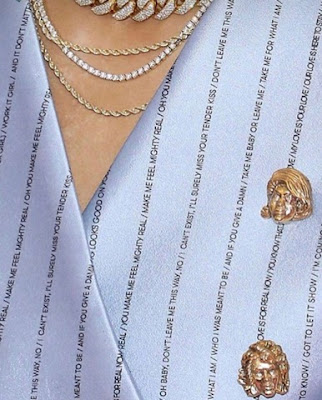 Jean-Raymond, who accompanied Waithe on the carpet, wore a similar suit bearing the lyrics from Nipsey Hussle, 2Pac, Jay Z, Nas, Drake, Meek Mill, J.Cole and Kendrick Lamar. These same rappers' faces were featured as buttons on the suit. 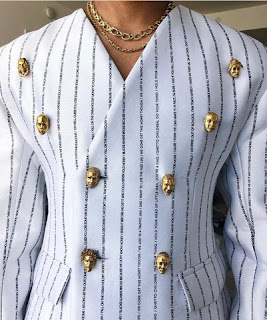 The very buttons on his cuffs were Black Power Fists. His suit had a message of his own on the back: “Fix your credit. Pool money. Buy back the block” — a lyric of Nipsey Hussle's. 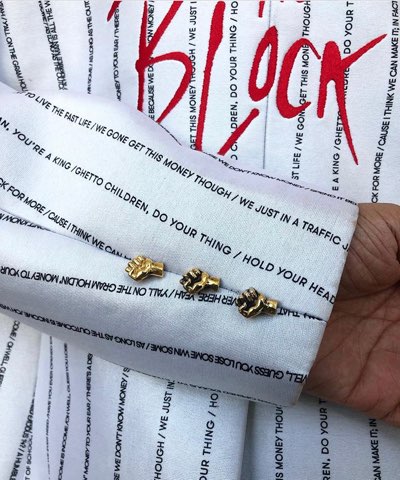 However, with all of the intentionality surrounding these suits, there was some confusion about the spelling of "invented" on the back of Waithe's jacket, spelled "Inventend." To clear this up, Lena took to Twitter, saying "Everything I do is purposeful," in response to a tweet saying, "Am I the only one to assume @LenaWaithe's #inventend was purposeful and not a mistake?" 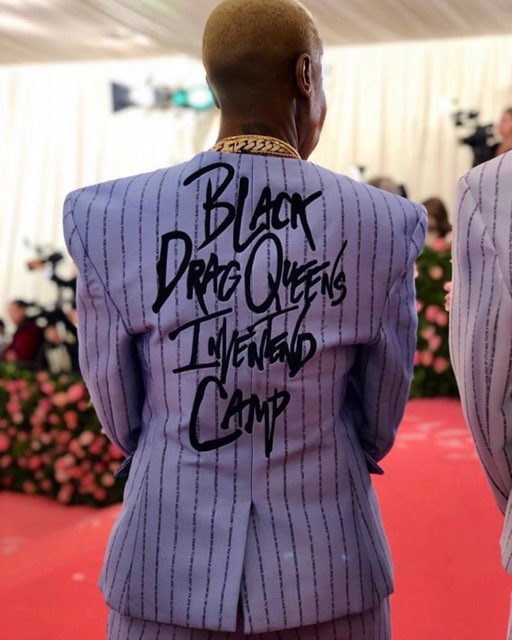 Lena further explained, writing "First there was “Periodt” ... and Kerby and I wanted to give y’all another one “Inventend” — which we take to mean a heavy emphasis on the "D."

First there was “Periodt” ... and Kerby and I wanted to give y’all another one “Inventend”.

Lena was on this year's Met Gala committee, so it's no surprise that she would get the theme right. I personally love that instead of going huge, ornate or opulent, like the cerebral person Waithe is, she drew within and chose to invest in the details of the look rather than the ornateness itself.

And may I say, it worked.

Waithe always makes a statement with her Met Gala looks, whether arriving literally draped in a rainbow flag or shouting out the creativity and innovation of Black LGBTQIA+ whose contributions are all but forgotten by folks outside of the Black or LGBTQIA+ communities. Lena set herself apart in Jean-Raymond's design, and thus is my personal favorite look from the Met Gala 2019.