Martin blessed the 90's with gut busting comedy and iconic characters over the course of five seasons. After the show ended in 1997, we were left with one of TV's greatest mysteries. What the hell did Martin's best friend, Tommy Strawn do for a living?

You remember the running joke.

Tommy insisted he was gainfully employed.

And so did we..until today.

Photo: Tumblr In an episode of the Don’t Be Scared podcast, Tisha Campbell Martin says the audience knew Tommy's occupation in season one
"But Tommy did really have a job.. I’ll give you a hint. Mrs., always forget her name, the woman I was going to fight, she was Martin’s teacher, Mrs., not Cunningham… okay, but you know who I’m talking about. Beverly Johnson played her. So, it’s in that episode, that’s the first time you hear about Tommy’s job. The second time you see Tommy’s job is in the Christmas episode when he brings us to speak to children and Martin calls the little boy waterhead
(Trinidad. Miss Trinidad.) So, Tommy talks about, him being in the Boys and Girls Club and he was a counselor at the Boys and Girls Club. That’s what he Tommy did for a living."

The writer's pulled a fast one on us.

Photo: Tumblr (*Exclusive image of me just finding out today that Tommy's last name wasn't "Strong" after all.) 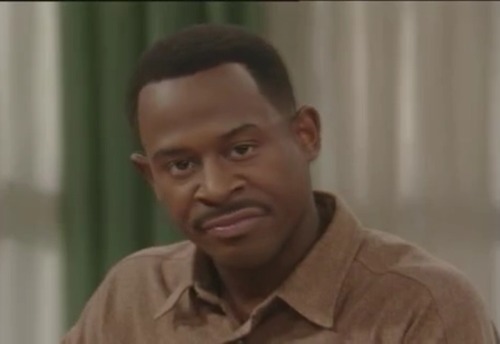 READ NEXT: 15 Man Crushes Only '90s Kids Will Understand