Trump’s Strategy To Win Over Black Men Is Working. Here’s How Democrats Need To Fight Back.

Black men are the swing voters that could define this election.

One of the most emotionally charged commercials of Super Bowl LIV featured the prison release of Alice Johnson, who was released in 2018 after serving 21 years in prison for a nonviolent drug offense. In the ad, Johnson stretches over her family to tell the cameras, “I want to thank President Donald John Trump. Hallelujah," screaming the last word at the top of her lungs. The ad closes with President Trump saying, "I approve this message."

To many onlookers, the 11 million ostentatious ad-buy didn’t fit into any coherent campaign strategy. They said it was Trump being Trump. But why would he choose one of the most-watched television programs of the year with over 100 million viewers to tout criminal justice, rather than his go-to “America First” message?

That’s when I realized he wasn’t speaking to his base. He was speaking to one of the top issue priorities of a specific demographic. This was a targeted and intentional move to reach out to Black voters, particularly Black men. This ad is evidence that Black men are not a marginal part of Trump’s electoral strategy, but his path to victory.

Since George Floyd's death, the Trump campaign has spent over 6 million dollars on Facebook advertising addressing criminal justice reform — over 800 times more than Biden has spent. This number is a powerful indicator of his overall strategy to peel off Black men from Democrats. For the Trump campaign, success is not winning 20, 30, 40 or 50 percent of Black men. In a close election, winning 10 percent of Black men could make him a two-term president.

Trump's spending spree has already yielded some results. Our research has found that in just September, 18% of Black men under 50 say they support Trump. Black men support for Trump has doubled from 2016 to now as a result of his aggressive marketing targeting Black voters. For a president who is regularly called a racist in liberal media, this is money well spent.

Winning more Black male voters is only one component of Trump’s campaign strategy. Trump’s strategy is not to win a majority of support from Black men, but rather convince a small but substantial percentage to not vote for Joe Biden. 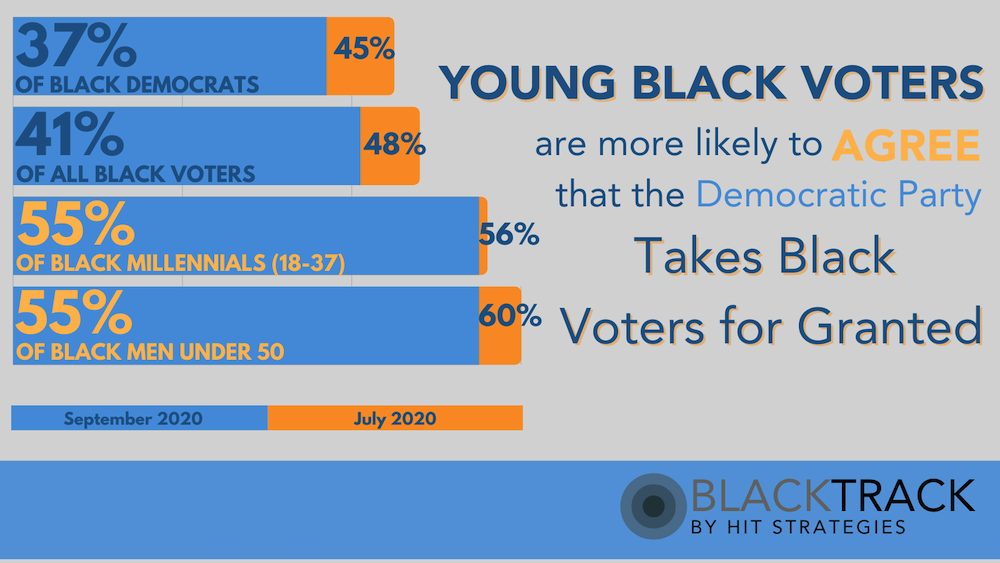 This is not a mobilization issue — it's a persuasion problem. Democrats must give Black men a better reason to vote.

Black turnout continues to drop since its peak in 2008 with Barack Obama. In 2016, turnout dropped by eight points while also skewing seven points more Republican. This decrease in Black Democratic support comes primarily from Black men, whose support has faltered by double-digit margins. While Democrats winning the Black vote in 2016 nationally by 81 points isn’t bad news, it wasn’t necessarily good. The Democratic path to victory relies heavily on running up the margins in American urban centers with Black voters. And the difference between good and great Black turnout is Black men.

Trump has continued to exploit Black men's skepticism of the Democratic party. In August, when Joe Biden called Trump America's first racist President, Trump's digital spending went on the offense, not the defense. Trump issued an ad calling Joe Biden racist with an ad that read: "The man who told millions of Americans, 'you ain't Black,' and used the term ‘Blafrican American,’ said that our President is racist. Joe Biden has absolutely lost his mind…”

For most Black people, this message fell on deaf ears. But when you listen to focus groups of Black men who lean toward Trump, their response echoes this sentiment. They say all presidents are racist, at least with Donald Trump, he says it upfront.

To combat Trump's strategy, Democrats need a plan that involves leaning-in directly into racism, their top issue. When you include racism as an issue in polls, it becomes the number one issue for Black voters. And our research found only 21% of Black men are very confident Joe Biden will improve race relations as President.

Democrats need a message that answers the question of dismantling racism. Better healthcare and more jobs won't do the trick. Democrats must adopt a message that shows Black people they are intentional about addressing racism. Black voters know the next president won't solve the problem of racism, and campaigns should avoid overpromising that they can.

Even in the era of Black Lives Matter, Democrats remain timid on the topic of racism. It isn’t enough to simply disqualify Trump on racism, though more work is needed on front. Democrats have to offer an alternative, talk more about racism and explain how specific policy ideas can help dismantle systemic racism. To win this election, Joe Biden and Democrats need to combat Trump’s strategy to peel off Black male voters. Talking about racism is the answer.