A #DerayHasBeenReleasedParty is happening, look who came out

Influential Black Lives Matter activist, DeRay Mckesson is one of over 100 individuals arrested late Saturday into early Sunday after a night of protests and unrest in Baton Rouge. The tension comes following a week of national protests calling for police accountability after the deaths of Philando Castile, Alton Sterling, rounding out the week with the killings of officers in Dallas. Images of McKesson being arrested circulated on social media as he is seen cooperating with officers.

He was charged with "simple obstruction of a highway of commerce" and released on Sunday afternoon. 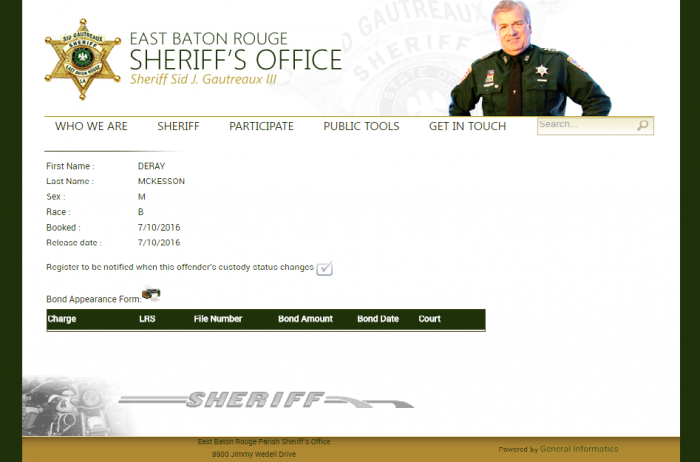 The conditions of his release were not listed.

Deray Mckesson Affidavit of Probable Cause by AdvocateOnline on Scribd

Mckesson posted about the experience via Twitter, thanking his supporters.

As I was in the cell over the past 17 hours, I thought of the quote that simply says if you want to test a man's character, give him power.

5 days ago, we saw the character of a few #BatonRouge officers as they used their power to act as the judge/jury then kill #AltonSterling.

4 days ago, we saw the character of a police officer in MN, like those in #BatonRouge, as he used his power to executive #PhilandoCastillo.

3 days ago, we saw activists & organizers continue to challenge the abuse of power of police officers in the name of the newly fallen.

2 days ago, the protests continued to grow in #BatonRouge & shifted from Foster to Airline, as folks steadfastly challenged police power.

There is no group of citizens that should be able to exercise their power w/o accountability or transparency, like the police currently can.

In the Parrish prison cells, we continued to talk about the work of social justice & to build community. We all continue to grow.

At times, all 50 of us were in one cell, unable to all sit, sleeping on the floor or under the benches. But our spirits remained strong.

I learned much about #BatonRouge from Chris, Miguel, & countless others while in custody & was also able to share info re: social justice.

We talked about a lot in those cells -- about #BlackGirlMagic in protest, the Metro Council, new ways of organizing, and voting.

And we are working w/ so many incredible folks to ensure that the rest of the people arrested get released quickly, too.

I think of protest as truth-telling in public. And I will never be afraid to tell the truth.

And shout-out to @Twitter and @periscopeco for helping us tell our story last night & over the past few years. Y'all are invaluable.

And thank you to the young woman who allowed me to text from her phone when I first got arrested so I could contact friends & the media.

I love my blackness. And yours.

And thank you to everyone who called, emailed, tweeted, texted, or donated on behalf of those of us who were arrested last night.

Sidenote: jail breakfast is awful & they'd be much better off buying apples to replace the "oatmeal" & the OJ is grainy.

I'm going to get a quick nap now. Sleeping on the floor under the fluorescent light of a jail leaves a lot to be desired. Be well, y'all.

Once everyone got word that DeRay was okay, the party began.

Quick praise break to start it off right b/c it was nobody but GOD #DerayHasBeenReleasedParty https://t.co/j3co2ZXx29

Me and @x3_Mea teaching our white friend that support BLM how to get in formation at the #DerayHasBeenReleasedParty pic.twitter.com/CzUXrIEEWA

And the DJ played all the jamz.

#DerayHasBeenReleasedParty Let's get it crunk, we gon have fun up on up in this dancery pic.twitter.com/FDkSxTMrZo

With a few special dedications.

About to hit the stage and sing "Lift Every Voice and Sing" #DerayHasBeenReleasedParty pic.twitter.com/mQ7rXBIEmk

The VIP section was LIT, too.

Oh #BlackTwitter. You make me smile. This #DerayHasBeenReleasedParty is just what I needed today. I love us. Onward. pic.twitter.com/wrIUXFmora

#DerayHasBeenReleasedParty Omarion's baby momma just tried to slide thru but i remember she tweeted all lives matter pic.twitter.com/V4vqFGKf7A

Security at the door waiting for the #alllivesmatter folks like #DerayHasBeenReleasedParty pic.twitter.com/gkkVC7wYV8

Hats off to the chef.

I have to dance off all that macaroni I ate... #DerayHasBeenReleasedParty pic.twitter.com/t9Ma9GgX3w

And plenty of drinks flowing.

IN OTHER NEWS
this #DerayHasBeenReleasedParty is LIT! i hear the open bar is stocked up on the good shit pic.twitter.com/hhNm5A9fGf

I made a guest appearance.

But had to dip early.

Can't stay long. Gotta get back to the house & get these greens started. Be good ya'll. #DerayHasBeenReleasedParty pic.twitter.com/BCaskGlhye