After the airing of BET's Black Girls Rock! Nev Schulman, host of MTV's Catfish tweeted a rather controversial comment about black women. He agreed that black girls rock, while also stating that they tend to catfish a lot 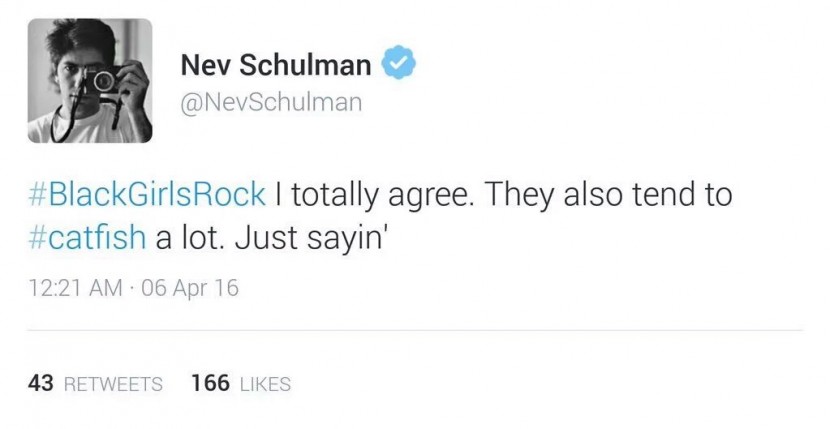 Even though he deleted the tweet, Nev soon learned that Black Twitter is not to be messed with.

It started with disbelief

So @NevSchulman decided to insult black woman on the night that #BlackGirlsRock aired? pic.twitter.com/l3QPFIDpnG

Then the SHOTS began

Nev Schulman is what happens when a certain kind of NYC white child realizes he ain't never gonna be smarter or more interesting than BW — OriginalRudeGyal (@Blackamazon) April 6, 2016

Black Twitter made #Catfish great. I can guaran-damn-tee they'll punt @NevSchulman out the paint faster than he threw ol boy's phone.

Along with the threats to boycott his show

I am TIRED of the blatant disrespect of black women. On our night to shine too. Nev is cancelled. @NevSchulman 🙄🙄🙄 pic.twitter.com/gQKd0n1zZK — anime princess (@melaninbarbie) April 6, 2016

Somebody even pulled out receipts

It doesn't surprise me that "Black girls tend to catfish a lot" in a world that constantly tells them they aren't enough @NevSchulman — Vanessa Veasley (@VanessaVeasley) April 6, 2016

And offering some good ol' compassion

I do PR. DM me. Help me help you. We can fix this, @NevSchulman.

Eventually, they had to take him to school

Maybe we tend to catfish a lot bc media and society portrays black women as ugly and unwanted, causing self hate. pic.twitter.com/KrOq6LUBmR — cici (@melaninporn) April 6, 2016

Thank u @melaninporn for taking the time to help me understand some of the issues POC deal w/. Sorry to all I upset. pic.twitter.com/ws9T1JraWf

And, as expected, he apologized

You're right to be upset & don't have to accept my apology, but I am deeply sorry to those whom I offended and learned a valuable lesson
— Nev Schulman (@NevSchulman) April 6, 2016

What do you think? Will you continue to watch 'Catfish'?