The First Step Act, which is legislation geared toward reducing mass incarceration through rehabilitation programs, has been favored by Trump and spearheaded by his senior advisor, son-in-law Jared Kushner. The bill has passed through the House of Representatives and now awaits the approval of the Senate before reaching Trump’s desks. But The First Step Act has more hype from Republicans than it has actual effective policy changes in the United State’s prison system.

The bill is broadcasted as a “first step” toward prison reform, because of how it theoretically reduces the level of recidivism by forcing inmates to go through rehabilitative programs. In addition to the rehabilitative aspect of these programs, inmates who participate can potentially earn time credits that count toward their release. Currently, there is a waiting list for inmates to enter rehabilitative programs, with the bill proposing to allocate 80 percent of $50 million per year over the course of five years, in order to provide more programs.

Although research has shown that rehabilitation programs in prison, like education programs, can help reduce recidivism, this legislation does nothing to address the structure of the prison system and how it reinforces recidivism as a whole. The First Step Act fails to take the treatment of inmates into consideration, and does not describe any new methods to actually change the way inmates are treated within prisons. However, making changes in that regard could increase the potential for inmates to stay out of prison after being release.

Almost all of the statutes within The First Step Act reinforce prison practices that are already being implemented. For instance, the bill allows inmates who participate in "recidivism reduction programs or productive activities" the chance to earn time credits, which could possibly lead to a reduced sentence and early release. But those in prison already can accomplish this by participating in the rehabilitation programs that already exist. According to the Federal Bureau of Prisons, those who complete the residential substance abuse program or who earn up to 54 credits per year for good conduct may become eligible for a reduced sentence. Another pre-existing practice the First Step Act presents as if it's a new, novel idea is placing inmates closer to their families, if there is an available bed in a nearby facility that "commensurates with [the inmate's] security and program needs." Both the bill and the Federal Bureau of Prisons claim that inmates who meet this criteria have the opportunity to be placed within 500 driving miles of their release residence.

Through the reiteration of existing prison practices, the First Step Act offers no policies that would actually change the lives of those in prison, legitimizing their present purpose as places of restriction. That being said, should this legislation pass, it’s highly unlikely that it will have any effect on the way federal prisons are currently run. The only notable change the bill has to offer is prohibiting the use of restraints on women "during periods of pregnancy, labor, and postpartum recovery." However, if a female inmate meeting this criteria has also been deemed a dangerous threat to herself or others, then "the least restrictive restraints" available can be applied. Given that a large majority of the The First Step Act is focused on rehabilitation and recidivism, this provision seems out of place within the legislation. It does not fit within its main objectives, and instead appears to only act as a cushion used to persuade its approval.

The bill also doesn’t address the real causes of mass incarceration. Instead, it places the cause of mass incarceration solely on the individual, using rehabilitation programs as a way to change the person, in order to reduce the number of people who enter prisons. We know there are many other reasons why a person may end up labeled a “reoffender,” such as police quotas, lack of access to employment opportunities and more. To incorporate effective prison reform, the legislation needs to also acknowledge that individuals only have a tendency to recommit crime when they are put into positions where they feel as if they have no other options. Rehabilitation programs may enhance the amount of education and vocational abilities inmates have, but their status as former felons could mean limited job prospects following their release regardless of the extent of their skill. Without emphasizing practices that provide more support upon inmates' return to regular society or aid in the removal of issues that bring people to prison in the first place, the First Step Act is merely shooting blanks at the problem.

Something else that is worth pointing out is the fact that a majority of all inmates in the U.S. are incarcerated in state and local prisons, not federal prisons. 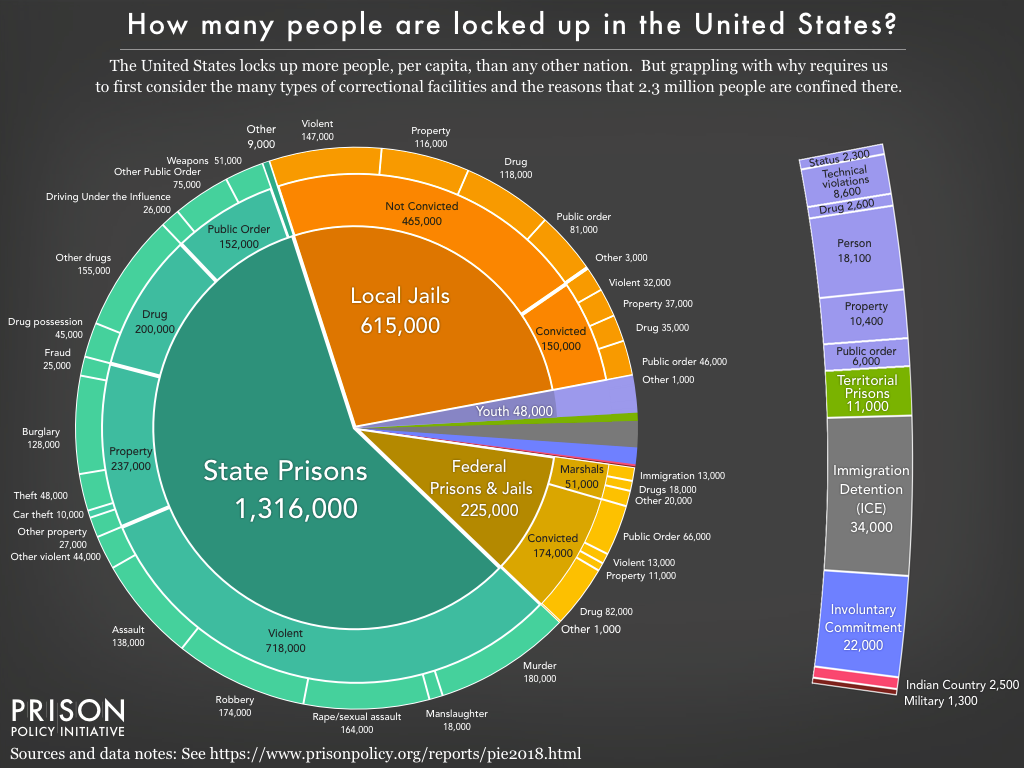 According to research by the Prison Policy Initiative, as of March 2018, there were approximately 225,000 inmates in federal prison, while local U.S. prisons accounted for about 615,000 inmates and state prisons held over 1,300,000 inmates.Therefore, the bill will not help reduce the number of people entering the prisons that actually have the most people incarcerated within them. Placing the responsibility on the inmate will not be enough to create the reforms that the nation needs to revitalize the purposes of prison.

There is also a hierarchy established within the First Step Act that encourages the rehabilitation of some but not all. The bill states that during the process of an inmate’s intake into prison, an algorithm will determine whether or not they would qualify as “minimum-to-low risk” or “moderate-to-high risk,” in terms of their likelihood to reoffend. It creates the separation of treatment between the two groups when it specifically states, “Priority for participation in recidivism reduction programs shall be given to medium-risk and high-risk prisoners, with access to productive activities given to minimum-risk and low-risk prisoners.” However, nothing specifically describes what issues possibly factors into one’s likelihood to recommit crime.

Although the bill states that the programs are geared more toward those classified as “high risk” of recidivism, the First Step Act consistently panders to those classified as “low risk.” For example, many of the privileges and rewards it gives for progress within the programs goes to those who are considered “low risk.” It also makes it difficult for others to receive privileges, and even excludes those who are undocumented as recipients. Furthermore, this system of categorizing and ranking inmates based on their "risk" for reoffense is similar to the same set of labels given to inmates prior to their placement in prison work — and funnily enough, prison work is listed as one of the options for rehabilitation programs. This begs the question of whether or not these prison work programs will be justified under this act, if it passes.

All in all, this level of classification coincides with the same format of policing that prisons impose upon individuals once they enter them. Instead of placing greater emphasis on helping all, it discounts most individuals due to their convicted crime, and emphasizes supporting those they deem as possessing “potential,” as these inmates can provide great results for status reports.

The First Step Act does nothing to actually put effective prison reform into action. Its method of reducing mass incarceration through the reduction of recidivism ignores the fact that prisons have no other purpose but to serve corporation, governments and the illusion of safety from its constituents. In order to effect real prison reform in the United States, there needs to be legislation that drills down deeply into addressing what is really happening in prisons and how these things actually impact its inmates. Additionally, policies should be revised in a way that allows room for other factors and mechanisms to stay, in place of protecting mass incarceration. With this current bill in the hands of the Senate and backed by Republicans, it is a clear that mass incarceration will take some time before it actually reaches the point of real decline.