I was recently graced by the virtual presence of uproarious break-out comedienne Charla Lauriston, who just dropped her gut-busting YouTube series Clench and Release this year. Originally from Boston, this Haitian sensation journeyed to New York in search of exploration and got just that. After briefly working in politics, she found passion in stand-up comedy and happily stuck to it. Now a driven and successful comedienne, Charla shows the world that Black women are just as comical and creative as their counterparts. 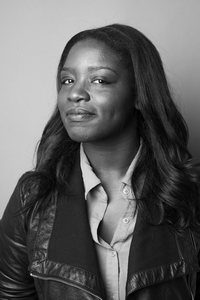 1. You're clearly proud of your Haitian heritage. Were there different experiences or encounters that you remember having growing up?

Church was a big part of growing up. My mom made us go to Sunday School and choir practice and youth group. There was a lot more, but the food was probably the best thing about being Haitian. Delicious amazing food.

2. When did you first discover a love for comedy?

I'd always loved comedy movies like Coming to America and What About Bob when I was growing up, but I didn't get into sketch stand-up and improv until I moved to New York and started getting into the scene. I took my first improv class and I wanted to know everything about comedy.

I was really just bored with Boston. I'd lived there for most of my young adult life and I wanted to go somewhere different, have new experiences.

4. What was your career before stand-up comedy? Are you glad you left it?

I worked in a Senate office. I was very glad to leave it. I was never really passionate about it or a good fit there, and I definitely think you have to love politics to make that a career. I just tried to think of my life five years down the road at that office and it made me so sad that I knew I had to quit and find something else.

5. Did you face obstacles pursuing your career in stand-up comedy as a black woman?

Not really. Luckily stand-up is not as racist as America is. I've never felt like anything was particularly challenging in stand-up because I was black, but I've definitely felt prejudice because I was a woman. Early on, I felt like bookers and producers would put me up first or give me less time on a show because they assumed I wasn't funny because I was a girl. But then I'd do well and that booker would invite me back and give me more time or let me close out the show. So even if they do assume you're not funny because you're a woman, all that really matters in the end is that you actually are funny. Also, every new comic will have a period of time when they have to prove themselves. I also came into comedy at a time when a lot of women were making a lot of noise. If anything, I feel like comedy is a woman's game right now. Tides and tastes are shifting. Shows like Amy Schumer and Broad City are some of the best on TV. That's one of the things I truly love about comedy (stand-up in particular) is how democratic it can be. If you're funny, it doesn't matter where you come from or who you are. You don't need much money to do stand-up (maybe a few bucks to do an open mic and the train fare to get there), literally anyone can try it. Then if you dedicate yourself to it, you can be successful no matter who you are.

6. Is your show Clench and Release based off of real events in your life? If so, what is true?

7. How did you land your hilarious mini-series on YouTube?

You don’t “land” anything on Youtube. Which is why it's great. I just decided I really wanted to do a series and I did it.

8. What makes you different from other comediennes on the scene?

I don't think I'm particularly different. Every comic I know comes from different walks of life. Some were corporate executives, lawyers or stay at home moms, or used to be drug addicts, or grew up poor or came from wealthy families. That's the great thing about comedy is that everyone has a story and where they come from is what makes their comedy unique. In my case, I'm a Haitian immigrant who thought they wanted to be a diplomat but then became a comedian.

I wouldn't even try to guess. I'd like to still be doing comedy and happy and healthy.

10. Have you always been so confident in your abilities to succeed? If not, how did you find that motivation?

I haven't always been so confident. I really credit stand-up for putting me through such rigorous mental training. Stand-up is very sink or swim, and after you perform (sink) enough, you start to build confidence.

Stand-up comedy is no joke!  But luckily for Charla, she was able to boom in the business and continues to make progress. Her confidence and wit allowed her to master comedy, run her own show and also be a writer for the first season of Tina Fey’s Unbreakable Kimmy Schmidt on Netflix. So if laid-back, talent-filled hoopla is your bag, follow Charla’s comedy quest on Tumblr, Twitter, and Facebook.