13 Incredible Black Artists, Past And Present, Everybody Should Know

Black History Month is in full swing and what a time it is to be black--and visible. Social media timelines and threads are flooded with all things that have us loving the skin we are in and celebrating the culture that connects us. Black art has done this long before the digital era. Black artist are the documentarians of black life.

Get into these artistic masters from the past and the living artist they inspired .

Augusta Savage was born in 1892, in the small town of Green Cove Springs, Florida. Savage was the first black artist to join the now defunct National Association of Women Painters and Sculptors. Her career as a sculptor began in New York City, during the Harlem Renaissance. Her work was largely influenced by the times. Her most notable work, "The Harp," which was commissioned for the 1939 New York World's Fair, was dismantled once the fair ended due to a lack of resources to maintain and store it. What a loss.

Elizabeth Catlett was born in Washington D.C., in 1915. She is hands down one of the best multi-disciplined black woman artist of her time. She was the first artist to gain a MFA degree in Sculpture from the University of Iowa. She was a skilled sculptor, but her print work gained more critical acclaim. Catlett's print depicted black life and circumstance. "Sharecropper" is one of her famed prints.

Jamaal Barber is an emerging artist to look out for. He hails from Littleton, North Carolina, and stands firmly on Catlett's shoulders. His work is one part narrative, one part portraiture and one part positive propaganda about blackness. Barber's prints project black nostalgia, contemporary life, and afro-futurism. His current exhibition, "Bright Black" centers black identity, and the color black, as the main driver of the American narrative.

Gordon Parks was a pioneer in photographing everyday black life in America. He was born in 1912, in Fort Scott, Kansas. His photographic prowess coupled with the sign of the times made him iconic. Parks' photos highlighted black Americans enduring adversity, poverty and racism at the height of Jim Crow. His series, "Segregation Story" brought to the forefront a perspective of American life that dominant culture ignored and refused to acknowledge as problematic. Unbeknownst to many, Parks was a the first black filmmaker to write and direct a feature film. He established the blaxploitation genre with his successful pioneering film, "Shaft."

Fabiola Jean-Louis is a rising star, mixing photography with historic themes. She is Haitian born and Brooklyn raised. Her images feature black subjects against magical and whimsical backdrops--settings that are not-so first nature to Blackness. Her current series, "Rewriting History: Paper Gowns and Photographs" is a throwback to the Elizabethan, Jacobean, Georgian and Victorian eras. Jean-Louis subverts chattel slavery, black cruelty and female European nobility by dressing black and brown women in period clothing.

Jacob Lawrence was born in 1917, in Atlantic City, New Jersey, and raised in Harlem, New York. He was a prolific painter who portrayed African Americans in his art. Lawrence was a visual storyteller. His paintings were narrations of the circumstantial and historical events in Black life. His work was considered "social realism." The most renowned is "Migration Series" which depicts the Great Migration, a time when droves of Black people, suffering oppressive conditions in the south, relocated to northern and western states, seeking social and economic relief. The series is composed of 60 individual panels, displaying a pivotal moment in black history. It was completed when Jacobs was 25-years-old. 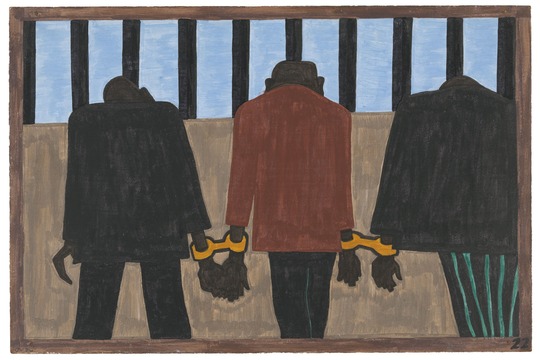 Jean-Michel Basquiat is black art's darling. He died at age 27, at the peak of his career. This Brooklyn native was self-taught and entered the art scene as a graffiti artist. He garnered mainstream attention with his quirky personality and edgy expressionist style, which incorporated a combination of text, tags, figures and disconnected patterns. At age 25, Basquiat was the youngest artist to exhibit work at the Kestner-Gesellschaft gallery in Hanover, Germany. He showed almost 60 paintings. Today, his work is among the most valued art in the world. Last year, his infamous skull painting sold at Sotheby's for $110.5 million. He tops the list of highest selling black artist of all time.

Addye Nieves is an emerging abstract and expressionist artist who integrates materials in her paintings: beads, silk sari scraps, fibers and plastic. She resides in New Jersey and is self-taught. Her work explores internalized otherness and the affects of trauma on black identity. Her work is a commingling of conflict and accord contained in bodily figures. It is both anxious and controlled.

Romare Bearden was born in Charlotte, North Carolina, in 1911. He spent most of his professional career in New York City. His work ranged in style from cartoon to collage. His collage work is remarkable. The narratives focused primarily on blackness: the body, the culture and abstract beauty. Bearden used his art as activism by advocating for black artist and projecting real images of African American  life in his collages to show black humanity. "The Block" and "Baptism" are notable works. Bearden is herald as the preeminent artist of the 20th century--a black great. The Bearden Foundation was established after his death in 1988.

Deborah Roberts lives and works in Austin, Texas. Her collage is strikingly beautiful and black. Roberts' art examines the intersection of race and beauty and status quo. Her latest collage centers black girls. They are situated against the whitest background, dressed in brightest hues and attention-grabbing patterns; none of which deflects curiosity or interest from the girls rich skin tone and demeanor. Roberts crowns them and presents them as cool and resilient. She empowers them.

Gordon C. James is the artist behind the magical illustrations featured in the award-winning black children's book, "Crown'' written by Derrick Barnes and published by Denene Millner Books. His contribution to "Crown" earned him a Society of Illustrators Annual Exhibition Gold Medal and John Newberry and Randolph Caldecott honors. James' work is art history in the making.