Cotton is literally in the fabric of all of our lives.

When you see cotton, what comes to mind?

Depending on where you’re from the answer may vary, but iconic artist John Dowell believes that the crop carries bales of history, hope and messages. That may sound like a lot of stuff for a soft, white ball to contain, but Dowell’s new exhibition at the African American Museum in Philadelphia, Cotton: The Soft, Dangerous Beauty of the Past, proves that idea of the fiber’s contents to be true.

Dowell was born in Philadelphia in 1941, and if you’re doing the math, don’t let his age fool you. As he toured me around his beautiful exhibition, life exploded through him. He’s constantly on the move, traveling between his two art studios, one in New York City and the other in Philly. The way he dresses is vibrant and youthful. During our meeting, he donned a turquoise blazer with a purple button-down shirt, complete with a purple and turquoise-patterned bow tie and a matching handkerchief in the blazer pocket.

Just like his bright presence, his artwork packs the same powerful, yet subtle punch. 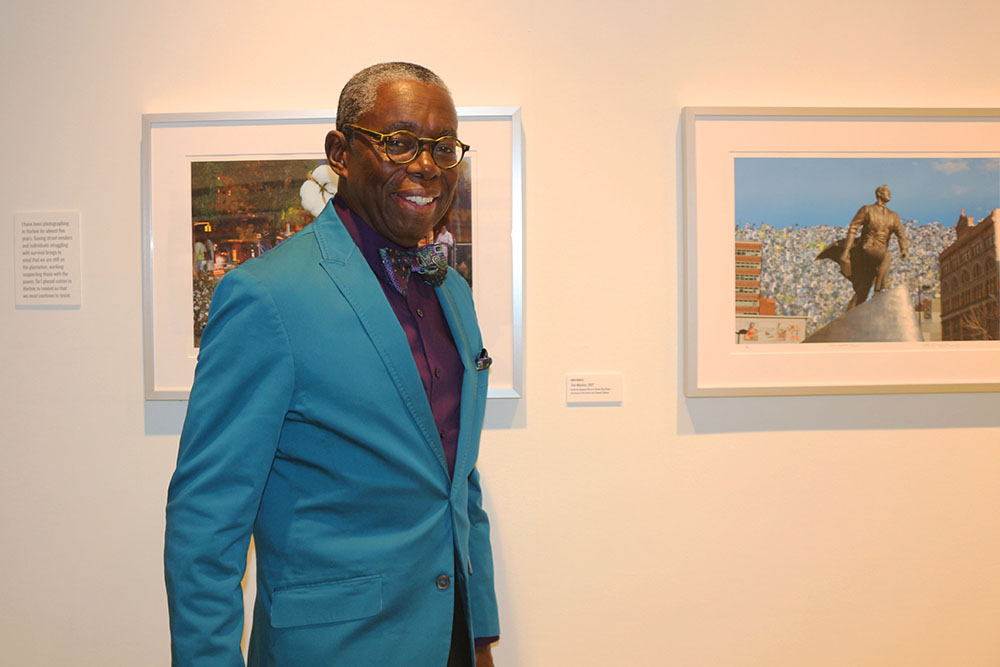 Cotton was years in the making. Dowell began photographing the crops in 2011. The idea came to him through a dream that featured his grandma, who he lovingly calls “Big Mommy.”

“Around June [a few years ago], I had one dream with my grandmother. And then in July, I had some more dreams with my grandmother. At that point I called my brother and sisters and asked, ‘Are y’all dreaming of Big Mommy?’ They said, ‘No,’” Dowell explained. “One of my sisters said, ‘You’re in trouble brother. Big Mommy don’t play.’”

But his sister’s reasoning for the dream wasn’t quite accurate. He was far from trouble, but instead, was being nudged toward  a new artistic endeavor. 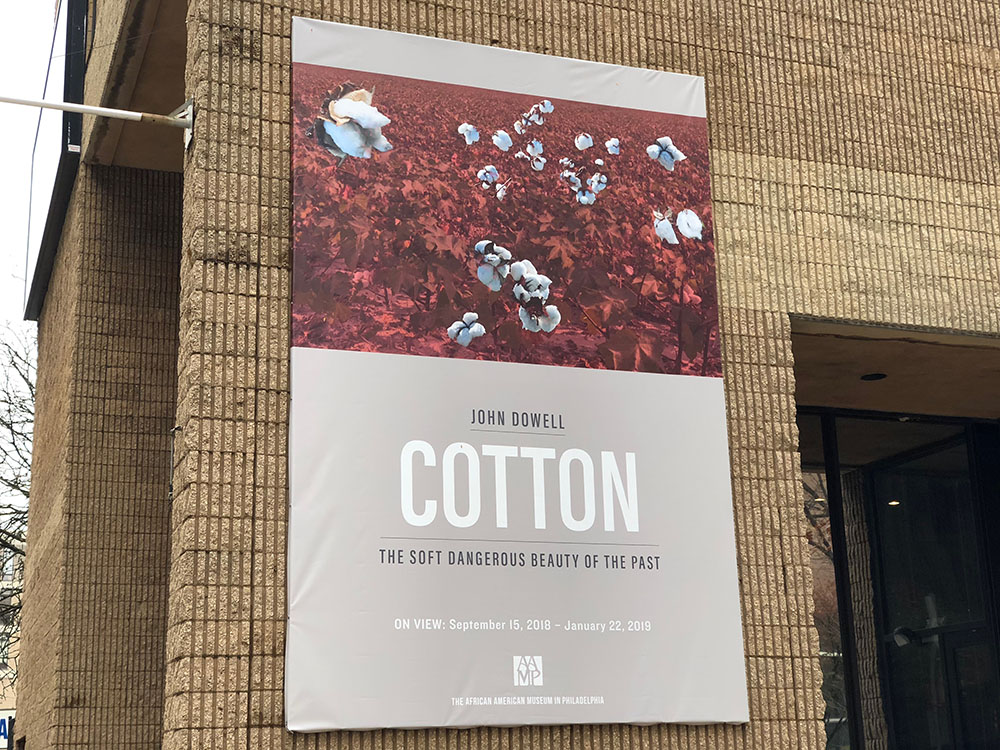 “So I had another dream, and I woke up in the middle of the night and said, ‘All right Big Mommy. What did I do? Why are you picking on me?’ I then saw this image of her with cotton, and remembered how she used to tell me stories of cotton,” Dowell told Blavity. “The next day, I got up and called a farm agent and made some appointments.”

Up until that point, Dowell never thought about cotton; it never crossed his mind. Nevertheless, he followed the path and began the work his dream led him to, first traveling to Savannah, Georgia. The owner of that initial field of cotton told Dowell that the property had been in his family for over seven generations. That information struck him emotionally and ran through his bones.

“Oh s**t. Big Mommy took me home, some place where my people worked this property. I just had this feeling,” Dowell said.

That was the start of an emotional creative trek , which spanned several years.

The pieces that comprise the exhibition aren’t only photographs. In the exhibition, which takes up two of the museum’s galleries, there's also an interactive installation and alter within the huge space. The installation is entitled “Lost In Cotton.” It’s made up of several 12-foot digital prints of cotton fields on taffeta, hung from the ceiling. Visitors are invited to walk through the material, experiencing how our ancestors may have felt while working in the middle of the vast crops. 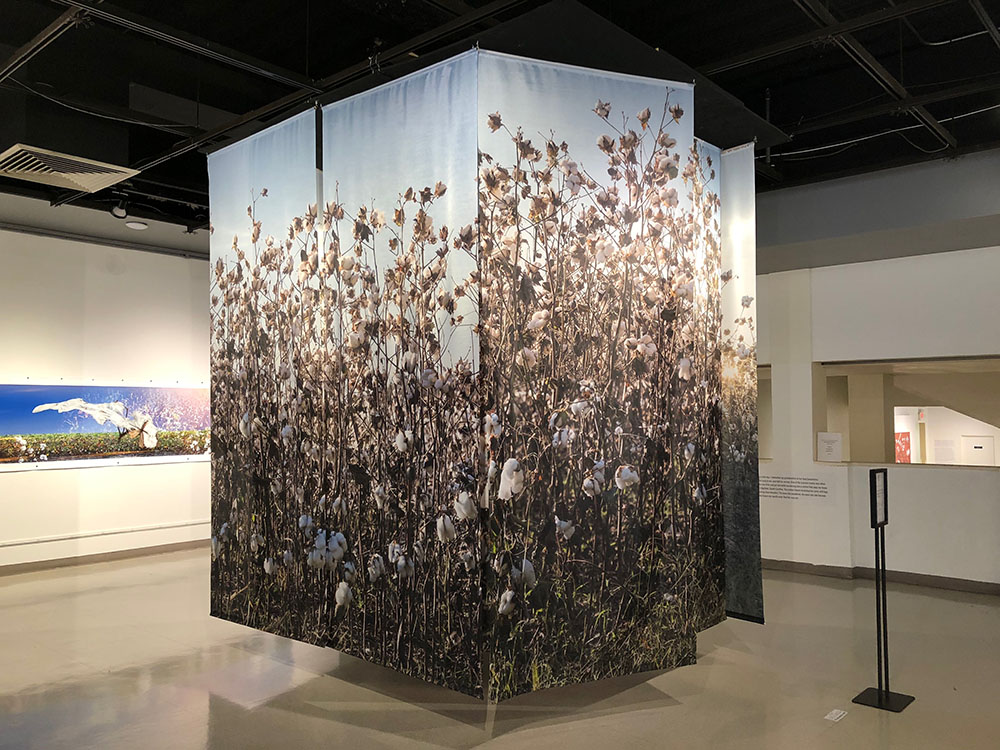 The altar is called “A Moment of Reflection,” and it’s built with wood and white acrylic paint. Stems of cotton crops rise up out of each of the altar’s three levels. Two benches are placed in front of the piece for observers to stop and sit for a moment, taking in the crop that our ancestors literally slaved through — day in, day out. To just sit and look may seem mundane, but when executed, it’s moving.

Those three-dimensional pieces are fascinating. However, in my opinion, they exist to give visitors context while viewing the core of the exhibition: The photographic pieces. The images of miles and miles of cotton fields are actually a departure from Dowell’s usual photography. He’s widely known for his unique photographs of buildings at night.

According to his website, “I photograph urban nocturnal landscapes in an attempt to capture the excitement of the city. Working primarily from sunset until dawn, I am able to deal with the surface of the buildings, the reflections on their exterior and finally to enter the space created by the interior illumination of the buildings."

Knowing this, it was surprising to see that almost every image within Cotton appeared to have been shot during the brightest points in the day.

“When I was shooting down in Georgia, [the farmer] told me, 'You can go to this field, that field and this field. [The other farmers] know you’re here,'” Dowell explained, as he pretended to point at an imaginary map. He paused for minute before further detailing. “All of a sudden, you have a Black man out in the cotton fields, on a tripod shooting things. They could say, 'He’s got a gun!' And boom.”

The light in the photographs aren’t so much an artistic decision, but more so a representation of keeping safe — something that correlates with a similar fear slaves also had about being caught in the crops after dark.

Full fields of cotton aren’t the only feature in Dowell’s images. In many of the pieces, he would digitally alter the photographs. In “The Protected Way,” cotton becomes something similar to life forms, floating and watching over the slaves that picked it. Ghosts of our ancestors levitate through the fields in the as stretched cotton in “Spirits Rising.” And cotton is gently photoshopped on top of a dense, sun-kissed crop in “Dottie Smiled,” a piece dedicated to his sister, who died very early from breast cancer.

“Sometimes you’re out there, and nobody’s out there. And you swear you’ve seen people,” he elaborated, explaining the choice of making cotton come alive in many of the works. 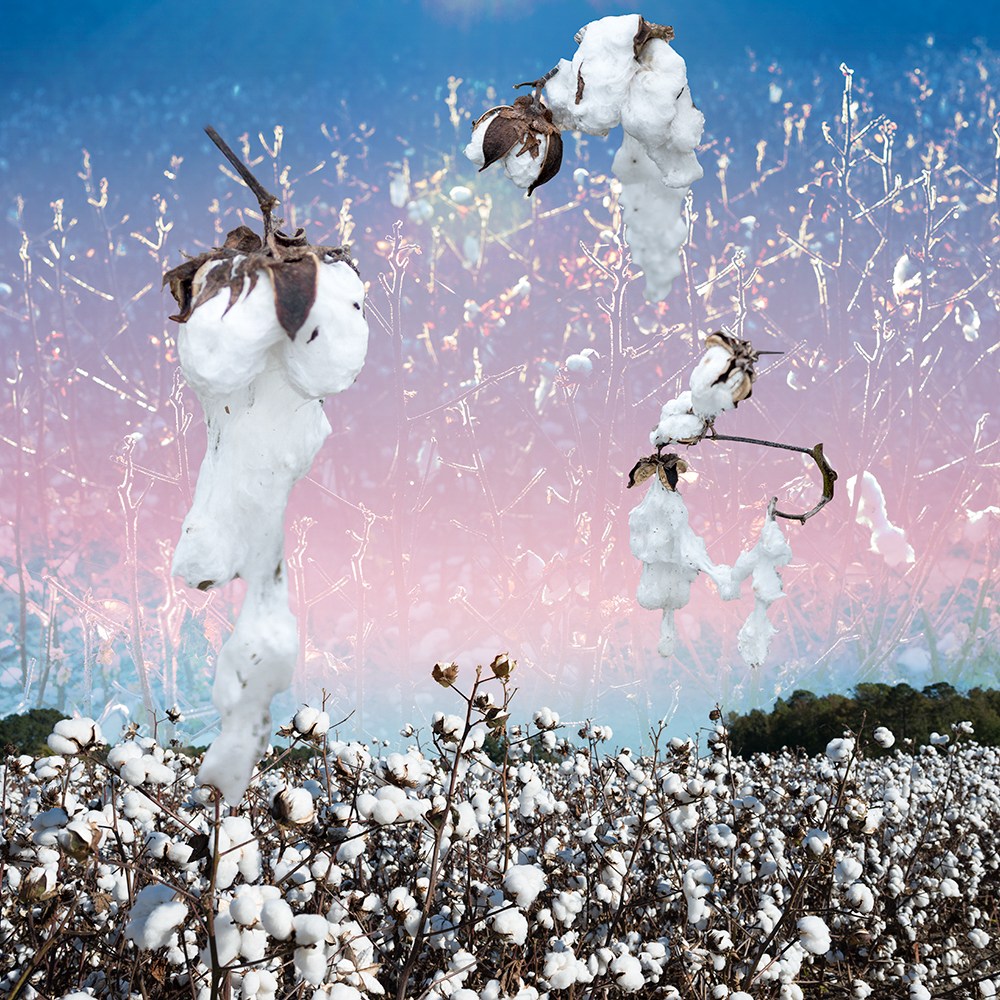 While exploring the exhibition, a huge change in the images takes place. Dowell makes an interesting choice to depart from the rural areas where the thousands of yards of cotton is grown, by opting to superimpose the crops in various New York City sites. Cotton suddenly blooms magically in the streets of Harlem, the lawns at Central Park and the sidewalks of Wall St. The message is visual commentary on how many Black people are still slaves in the spaces we now believe we’re free in. It also highlights spaces where slaves once existed in the Big Apple, and other locations that were taken away from us.

“Why did you decide to make orange and yellow come out of the roofs of the houses?” I asked Dowell while analyzing his piece “The Lower Seneca Village,” a photo taken on the west side of Central Park, in which he inserted cotton on the grass and sketched blue boxes with aggressive orange and red lines shooting above each one.

“How would you feel if someone took your house away from you? You’d be pretty hot,” he responded. 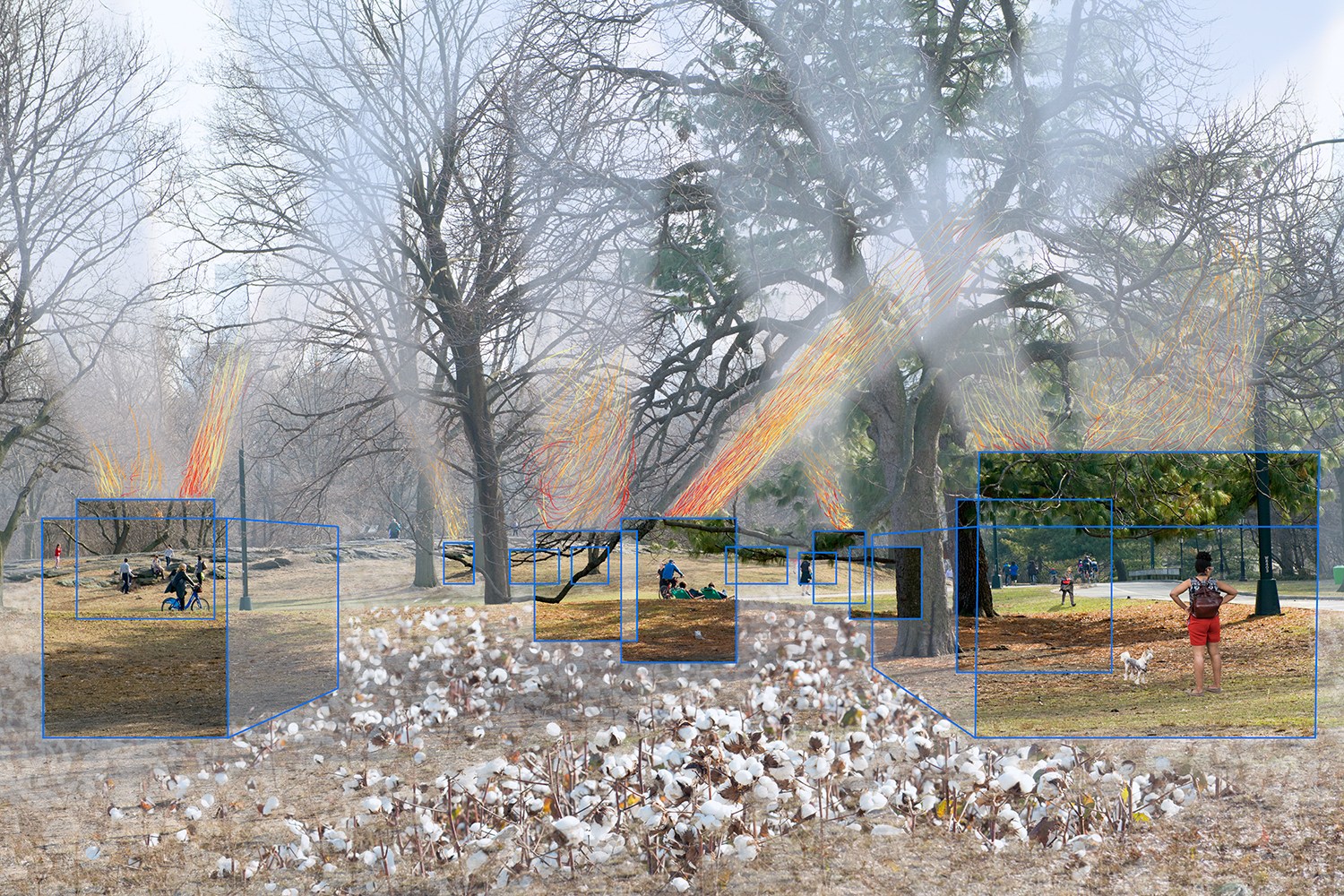 There’s a terrible history of slavery and repression of Black people in New York City that is rarely talked about. Dowell’s work seeks to start conversations about the lives of those people, and the spaces that were stolen from them.

Through the Cotton exhibition, John Dowell leaves the viewer with a new perspective on the clothes on their backs and the sheets they lay on at night — all created from a crop with a history of pain, struggle and hope. Cotton is literally in the fabric of all of our lives everyday and around the world.

“I tell people that what I try to photograph and put together are things they can’t see. I’m trying to get you to feel.”

'Cotton: The Soft, Dangerous Beauty of the Past' is currently on view until January 21, 2019 at the African American Museum in Philadelphia.