For Many Black People, Our Last Names Are Still A Direct Connection To Slavery

While we come to have a great deal of pride in our family names, it is a point of rhetoric steeped in cognitive dissonance.

When I was in High School I began spelling my last name with an X: Jaxon. While it was more stylistic embellishment at the time than social consciousness, it has come to take on a whole new meaning for me — the reclamation or ownership of the fullness of my identity. While evading responsibility for an hour in our favorite fashion, scrolling my timeline, I came across this meme: 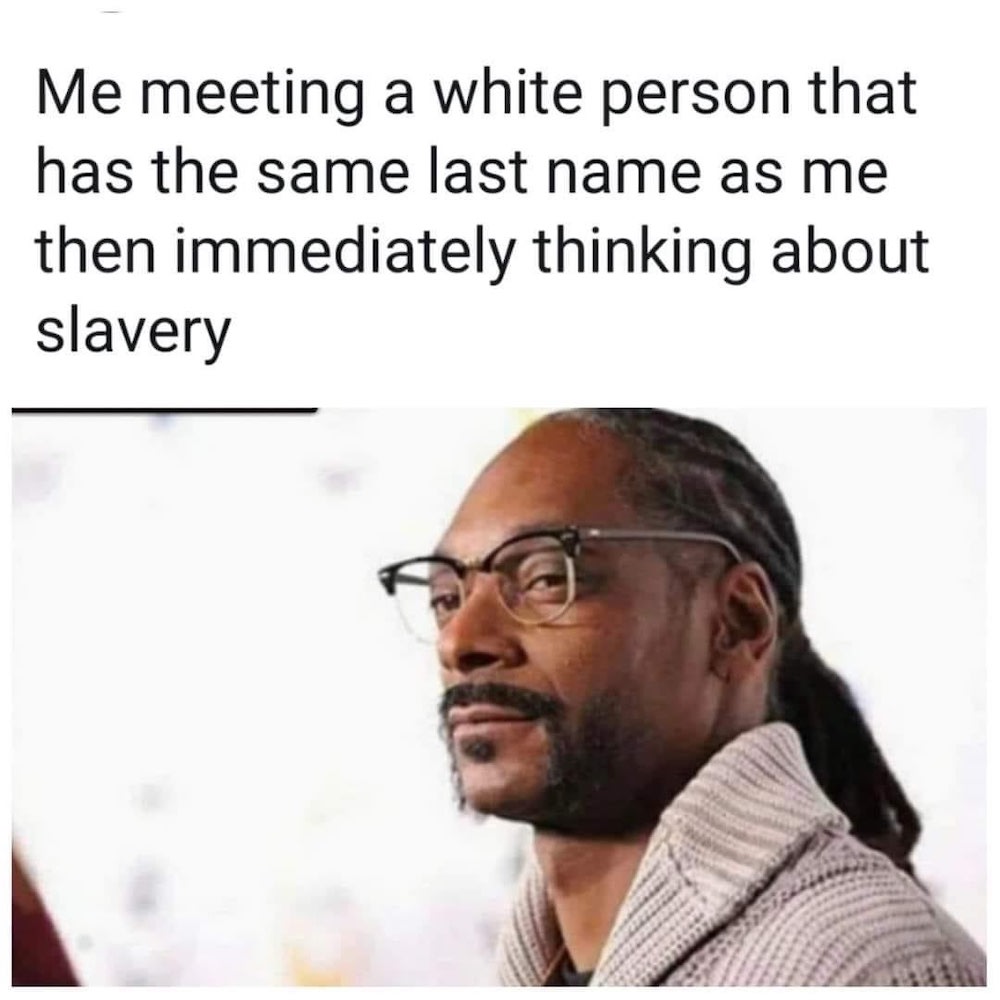 I hit the laugh reaction and then thought immediately about the truth behind the humor. The truth is that when I think about my identity and freedom juxtaposed against slavery, I’m moved to remove my laugh and replace it with the care option. It made me think, what is in a name that’s not your name?

As I found myself looking at the meme, it brought up a point that I reference a lot when trying to explain, ad nauseam, to people why slavery is still relevant in modern times. When we have children one of the first things we do is impart the stain of slavery onto a new generation. We brand them with the humiliation of slavery. We give them a name that is not ours.

And while we come to have a great deal of pride in our family names, it is a point of rhetoric steeped in cognitive dissonance. Mental duplicity if you will. I believe it was W.E.B DuBois who wrote so eloquently of this double mindedness. To hate and love the most basic thing attached to you.

The brilliance of Lovecraft Country is that it investigates Blackness in sci-fi, where Black folks are often not seen even. Especially in images of the future, though since we first stepped off the slave ship, the future is a place where we’ve always lived. It is a place of hope where we’ve always seen ourselves no matter how perilous our present is or how painful our past was. Episode eight, a particularly poignant installment, showed the power one has when they name themselves and step into the fullness of self identification. Hippolyta found her power in the agency and autonomy to call herself by her own name.

That’s particularly powerful when you look at folks like Malcolm X or even Jhené Aiko (who celebrated that concept in the naming of her most recent album, ‘Chilombo’). Jhene’s father, a Black man from Cincinnati, adopted his own last name and gave that to his children, unshackling them, in part, from the burden of carrying that double mindedness in that part of their life and identity.

What’s in a name that is not your name? It is the constant reminder of all that was stolen from you. That’s why I think “ghetto” or “black” first names are deserving of celebration. It is once again a prime example of Black inventiveness and ingenuity. A penchant of our aptitude of conjuring lemonade from the rotten lemons we were given. They represent heritage, identity and rebellion. They are only frowned upon when held in the light of white standard-ism that is still so prevalent in Black society.

Our last names, some call slave names, are one of many remnants of the pillars on which racism was built. This is why we “can’t just get over slavery.” We bear it’s brand and it’s burden with it, metastasizing generation to generation. Much like chitlins and gizzards, our last names are seasoned scraps we’ve come to love.