Good Kids Mad City Is A New Group Led By Students Of Color Who, Like Kendrick, Know The Power Of Their Voices

These students will not be silenced.

Chicago and Baltimore are two major cities that have been charged with heavily fighting gun violence for years. The youth of color, who call these cities home and who are most affected by this violence, are speaking out and refuse to go unheard.

Good Kids Mad City (GKMC) is a student led advocacy group that developed after the deadly shooting in Parkland, Florida. It is made up of students from Chicago and Baltimore's public school systems who have collaborated to organize against gun violence and to stand up against unfair and unjust decisions made by city officials.

During a press conference shortly after the Parkland shooting that left 17 dead in February, the black students (who represent 11 percent of the 3,000 students at Marjory Stonemason Douglas High School), spoke out about their discontent with their lack of support thus far. The white students who spoke out have been receiving all of the attention (and sympathy). 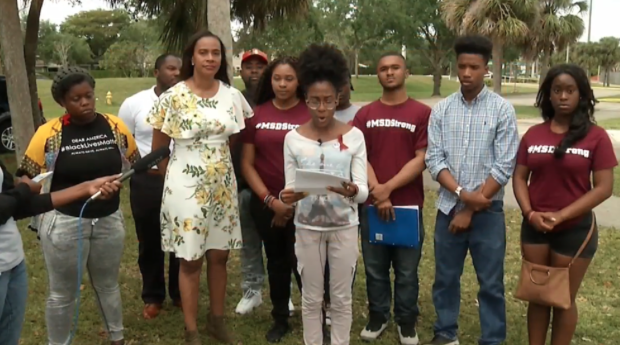 "I am here today with my classmates because we have been thoroughly under-represented and in some cases, misrepresented," Douglas student, Tyah-Amo Roberts, said during a press conference held in Parkland.

Students who are a part of GKMC stand with these Parkland students, and are committed to cultivating change within their own neighborhoods of the south and west sides of Chicago as well as Baltimore City.

For Chicago, Mayor Rahm Emanuel and his agenda have been the main target of youth organizing against gun violence in their respective neighborhoods. According to Shadowproof, Emanuel campaigned as an education-friendly candidate, but he is now notorious for closing public schools in working class black and Latino neighborhoods. In 2013, he closed nearly 50 public schools, displacing some 12,000 students, the majority in low-income neighborhoods of color.

Emanuel's focus on policing at the expense of resources like schools, mental health clinics, affordable housing, and other programs and services for communities have thus far resulted in the death of people of color at the hands of police.

These community organizers are simply not having it.

“We’re not given the resources in our inner cities and neighborhoods in both Chicago and Baltimore. For example, multiple schools have been closing in Chicago in areas populated by black youth, and no money is being invested into the places where it is happening the most, so the lack of accessibility to youth centers, mental health clinics, etc.—most of us have no access to it,” said Alycia Maoton, a 17 year-old junior at Kenwood Academy in Hyde Park and member of GKMC.

As for Baltimore, the funding for the city's public schools has resulted in serious consequences for students.

In December, the school board voted to close five schools. To make matters worse, many of the city’s schools closed, let students out early, or took other measures due to a lack of heat in them. Students were forced to layer clothing due to low temperatures on on some occasions.

Recently, Marietta English, president of the Baltimore Teachers Union in a January letter addressed to the CEO of Baltimore City Public Schools in a letter. “Trying to provide a stable learning environment in these extreme conditions is unfair and inhumane, to say the least,” English wrote.

Destiny DeShields, a 17-year-old student at Baltimore City College and an organizer with GKMC, believes the biggest problem is poverty and underfunding of resources from local government.

“I think community and school safety looks like having the government having a racial equitable lense in order to provide capacity support for community grassroots organizations, culturally relevant trauma centers and mental health facilities for students of color,” DeShields said. “I believe that community leaders who have the needed funding from the government will allow there to be community building and allow the community to rehabilitate themselves against some of the injustices they face, as well as allowing students to feel the same type of safety in their school when they are walking down the street from their houses.”

In DeShield's opinion, "Rahm supports schools and resources for cops, not for Black and Brown kids.”

The young people that drive this coalition, who live in the neighborhoods most affected by these issues, often have a better understanding of them than their alleged representatives in City Hall.

DeShields is connected to Chicago students via SOMOS, a Baltimore based organization “focused on the issues centered around the Latinx community." She stated their connection  has a lot to do with the “Both of our cities low school funding of their. Baltimore and Chicago also have extremely high poverty and murder rates in it’s inner cities.”

Both of these cities face serious racial divides both educationally and economically, but both possess students who have decided that this cannot go on much longer. These students are insuisting on justice for their communities.

While there is much work to be done, and a long way to go to close this frustrating racial divide, GKMC’s organizers are encouraged by the work they've accomplished so far and are confident their activism is sure to bring about change.

If you're wondering how you can help or contribute to the movement, check out @GKMC18 on Twitter.