Wholesome entertainment..what's that? Pop culture pushes the envelope with each passing generation, proving our eyes tend to be most attracted to gaudy sights. Elvis Presley caused an uproar in the 1950's by thrusting his hips on television, which was once considered a lewd public act. In 2016, Rihanna is cultural icon for riding the waves with her hips in motion, to the beat of Work with Drake's eyes glued to her rear end. We're beyond the point of buying into sex. Sex is both the supply and demand. Everywhere you look, be it social media or television, self-expression comes with bare flesh. We're becoming desensitized to nudity. Amber Rose is an advocate for women having the right to display skin to their own discretion without fear of harassment or bodily harm. Your body. Your choice. In a way, she's right
But who is around telling young girls to keep their sexuality on reserve? Plenty of African American role models, past and present

Next Up: Zaria Peterson 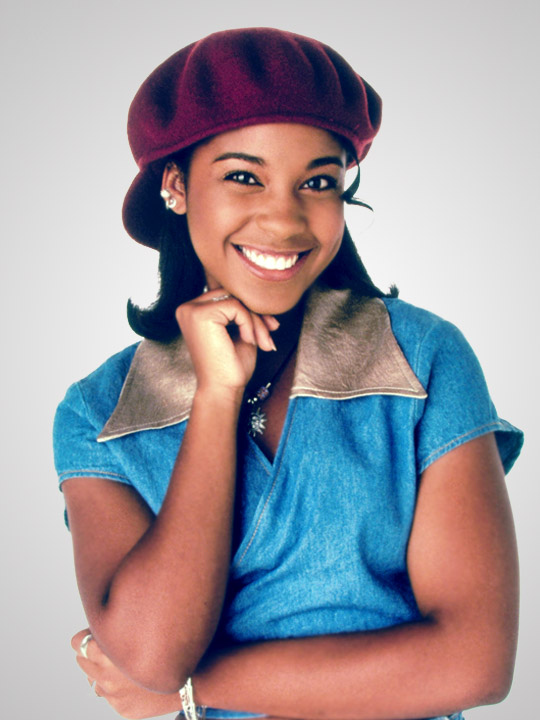 Photo: Tumblr Music videos in the 1990's began to evolve from its predecessors. The visuals told great stories in short form, and women were front and center, dawning scantily clad attire serving as an ornament to song. Think prehistoric twerking and more along the lines of passe "rump shaker." In an episode of The Parent 'Hood, Zaria (Reagan Gomez-Preston) wanted in on the music video glory. The second oldest to the Peterson children quartet had her fair share of teen drama and took it all in stride with her overprotective father blocking at every possible occasion. The show ran for five seasons, from 1995 to 1999. This strong, Black family unit was a hip response to every other household running at that time. The Banks were wealthy in Bel-Air. The Winslows gave us middle class high jinks in Chicago. In Harlem, the Petersons had more of an edge, led by Robert Peterson's (Robert Townsend) ultra imaginative dream sequences to solve everyday family issues. Even with his urban Father Knows Best vibes, Zaria was as normal as it gets

It seems as though every fictional girl had Usher at their party back in the day.

Photo: YouTube Dealing with peer pressure, Zaria thrusts herself under the bright lights for one episode just to get a taste of fame and desirability

Photo: The Parent 'Hood Robert makes no qualms about his disdain for cheap music videos, forbidding Zaria from appearing in one even if it meant sharing fame with her favorite superstar, Sashay. Big brother Michael gives her a pass by signing the parental consent form against the wishes of Robert and mom, Jerri (Suzzanne Douglas). Zaria and her girlfriends are eager at just the thought of being in a video, with their minds stuck on looking sexy enough for the camera. Things are quite the opposite from their girlish fantasies upon arriving on the set. The director is a male chauvinist, hell bent on the exploitation of "booty." The flimsy dresses are just the tip of the iceberg, yet despite Zaria's protest, she ends up caving to the pressure
This episode detailed the sharp contrast of celebrity public image versus their individual ideals. What you see from them, isn't always what you'll get. Over time, you realize they're flawed humans just like any commoner. An image is just that, an image..what meets the eyes. Try telling that to a kid. Young people have their minds fixated on celebrities' likability, often let down by egos and power trips
Sashay was everything Zaria hadn't hoped her idol would be

Sashay: Look honey, men want to look at women's figures
Zaria: What about what women want? Sashay: Well, if we give them what they want then we get what we want. You've got to use what you've got
Zaria: I've got a brain and I'm gonna use it right now, I'm outta here

Zaria's morals, saved the day and her dignity.

Zaria manages to get by Robert without him ever knowing she defied his orders. In the end, when she is walking up the stairs we learn Zaria chooses not to dedicate her time to Sashay but instead to feed her brain with the literary works of Maya Angelou. Parents are there to mold their children to a certain image, but they, the children, ultimately decide how their lives will be modeled. Here, The Parent 'Hood demonstrates what's popular isn't always stylish
Twenty years ago I remember looking up to Zaria's outgoing nature and go-getter attitude (also because her boyfriend TK was a hottie). Now that I am an adult, Reagan still positively influences my entertainment ambitions with her tweets and encouraging messages.  This is the kind of former child star worth keeping up with. Take a listen to her podcast, Reaganomics
*Purchase your #BlackGirlBadassery tee here