Stacey Johnson-Batiste was just five years old when she met her BFF.

Stacey Johnson-Batiste was just five years old when she met her BFF, Vice President Kamala Harris. The two young girls were inseparable from the day they met, solidifying what would become a lifelong sisterhood. This unbreakable bond spans decades, family losses and immeasurable career accolades, all highlighted in a new book written by Johnson-Batiste titled, Friends from the Beginning: The Berkeley Village That Raised Kamala and Me.

Additionally titled as A Memoir of Sisterhood, Community, and Resilience, the idea for the book came to Johnson-Batiste during the Biden-Harris run for office when she and a few of the vice president's other loved ones were tasked with telling the world about the history-maker who would go on to become the country's first woman, Black and Asian-American vice president.

"I had a bunch of yellow sticky notes everywhere and the more I started making notes, the more I started to remember," Johnson-Batiste told Blavity. "I was really going back to my memories—back to when we were little and growing up."

At the suggestion of her friend, Oscar Jackson Jr., who is a rapper known as Paris, Johnson-Batiste began journaling all of those memories. She carried the journal on her cross-country flight to Washington, D.C. for VP Harris' inauguration.

The story began to take shape from there. 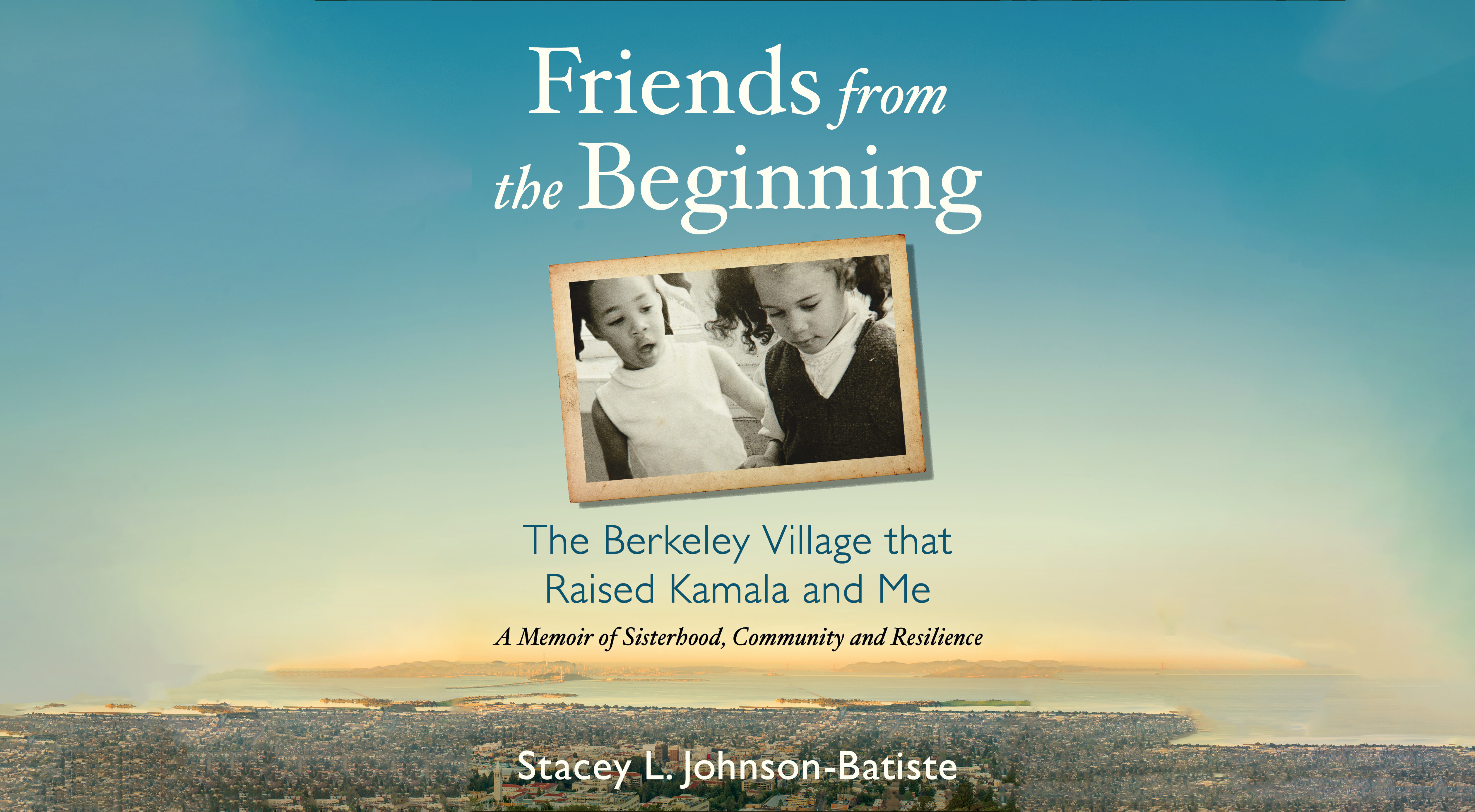 As such, the book begins with the author sharing her excitement about receiving her invitation to the inauguration, which came as a surprise due to the limited number of attendees allotted following the January 6 insurrection and per COVID-19 protocols.

"My heartbeat sped up as years of memories flashed through my mind, too quickly for me to even register any of them. My very first friend had made it to the second-highest office of this land," Johnson-Batiste writes. "I had been given some indication that I might still be able to go, but it was only upon receiving the actual invitation that it felt real. Soon my shock evolved into exhilaration—an emotion that had not come naturally for some time."

"I could not stop writing," Johnson-Batiste told Blavity. "I started thinking of qualities and characteristics I've seen displayed in Kamala, and before I knew it, those became chapter names. I felt so moved that I had to get this story down."

Throughout the emotion- and personality trait-titled chapters, such as Passion and Purpose, Grit and Presence, Johnson-Batiste explores not only the intricacies of her friendship with VP Harris but also the entire concept of sisterhood and showing up for each other. She dedicates an entire chapter to the bond their mothers shared and rides an overarching theme of the community values, determination, joy and grief, noting how each moment shaped them both in what Johnson-Batiste refers to as the "small community" of Berkeley, California.

"Growing up in Berkeley, in general, it was such a diverse community—I think that because of that I try to be more open-minded and consider other people's perspectives," Johnson-Batiste said. "I think it just broadens a person's outlook on life and how they perceive themselves and the world."

These are the things, she said, shaped her and VP Harris, in particular during the 1960s and 1970s when Berkeley was a major hub for social justice and fights for equality, including women's rights sought through the solidarity of sisterhood.

Johnson-Batiste makes it clear that while she seeks not to discount the structure of sisterhood other women may have, her book specifically references the concept from a Black woman's perspective.

"The sisterhood—particularly for Black women—is something we don't celebrate enough," she said. "It's so vital and critical to how we mother, get through breakups and being able to share what's on our minds, and not even having to explain. When you have your close friends and they know you and you know them, you don't even have to explain, they can feel you. That support along the way and throughout our careers is a bond that is hard to describe—it is just felt, and it is irreplaceable."

This is the sisterhood she shares with VP Harris, however far apart they may be these days. For Johnson-Batiste, sometimes it still feels like they're early career professionals who owned condos in the same Northern California building.

Though Johnson-Batiste shares some of her most precious memories with VP Harris, the newly-minted writer cautions potential readers that there is no "dirt" or gossip in her book.

"I didn't want to put anything that would be hurtful or disrespectful or anything like that—I just tried to touch on our memories, hard times, sad times, happy times and just frame it around those qualities."

And so the book is truly a celebration of her friendship with VP Harris that she crafted with great care. Not as a means to show a different side of her friend, but to lift up the person she said VP Harris is at all times.

"The person people see on TV is really who she is," Johnson-Batiste said. "She is not some politician person peddling stuff—she's the real deal. I just want people to know a little bit about our roots."

"I am so very proud of her," she continued.