When Shonitria Anthony, proud-weed smoker and mother of two, went on the hunt for a community of Black mothers who, like her, were vocal about their cannabis use,  her initial search was to no avail.

“I was sitting at home one day — smoking weed obviously — with my boyfriend, and I was thinking if I was the only mom who does this,” Anthony, who currently lives in Los Angeles, told Blavity. “Then I thought that maybe I’m just some sort of an anomaly. I decided to start googling 'stoner moms' [and] 'moms who smoke weed' just to see what it would bring up, but all the women I found were white — so I was just very confused.”

As a result, in 2017 Anthony created and launched the Blunt Blowin’ Mama website and Instagram page in an effort to build a community for Black mothers who smoke weed. The various questions that she got from moms on her Instagram page urged her to start her own podcast this month, just in time for Mother’s Day. The podcast is aimed toward exploring various issues surrounding Black motherhood and cannabis.

I started using cannabis again when my son was 1 month old and I was really worried that it would impact my milk supply. Well, it turns out it's a concern a lot of other women have too when it comes to using cannabis as a breastfeeding mom. On the new episode of Blunt Blowin' Mama podcast dropping tomorrow I discuss what really went down when I started reincorporating cannabis into my life as a breastfeeding mom. #bluntblowinmamapodcast #bluntblowinmama #mompodcasts #womenpodcasters #blackwomenpodcasts #cannamommas #jointsmoker #cannabisqueen #cannabisqueenz #ganjagoddess #stonermom #cannaparents

“Eventually, I was starting to get a lot of questions from a lot of other moms about pregnancy and cannabis, breastfeeding and cannabis — and I couldn’t answer all of their questions, so I figured I should start a podcast,” Anthony told Blavity.

Blunt Blowin’ Mama has debuted at a time when smoking weed is becoming slightly more acceptable in American culture, as more states legalize cannabis use each year. Following the 2018 midterm elections, Michigan, Missouri and Utah legalized weed in some form. Additionally, Washington, DC, and 10 other states — including California — have implemented broad measures to legalize recreational use.

According to a 2017 study published in The Journal of the American Medical Association (JAMA), more pregnant women seem to be using weed to help with morning sickness and anxiety. A sample of pregnant women in California was included in the study, which reported the prevalence of marijuana usage increasing from 4.2% in 2009 to 7.1% in 2016. However, Anthony said that such studies and related research hasn’t eliminated the negative stigma associated with pot-smoking mothers, especially for Black moms.

“The first thing people think is that you’re a bad mom, and I think that’s wrong,” Anthony said. "Cannabis can be used to take care of yourself, and self-care is important, especially for women of color. For Black moms, we already get hit with a lot of negativity, which is completely unfair. The narrative is always Black women having too many abortions, or Black women having too many kids. When you see these white moms who are consuming cannabis — I don’t see anyone attacking them.” 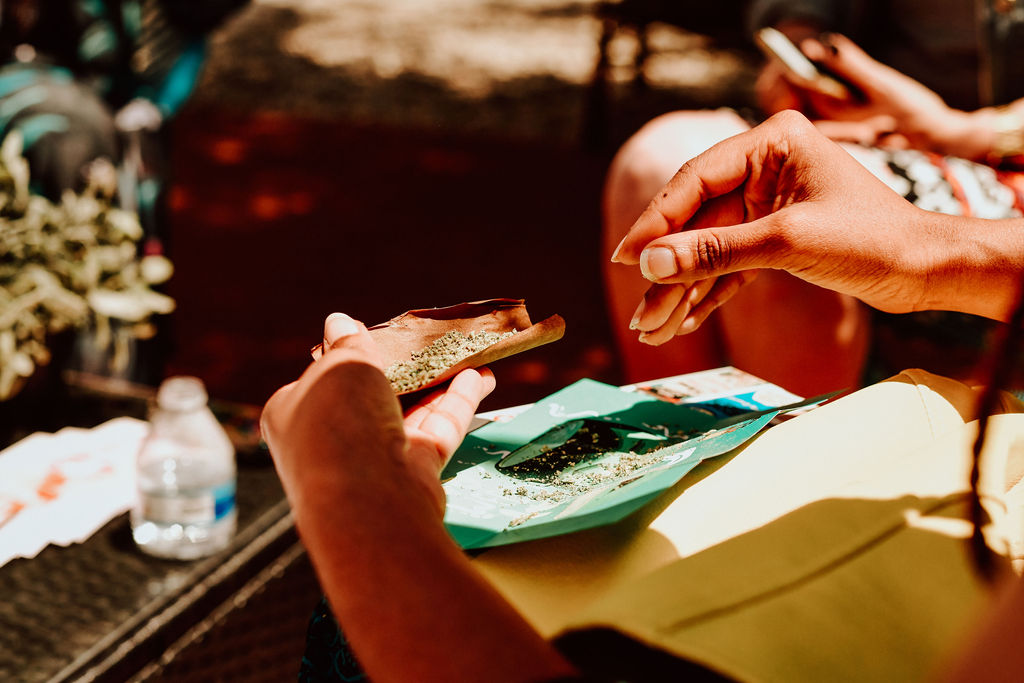 A mom to a four-year-old daughter and four-month-old son, Anthony said smoking weed certainly makes her a better mother and allows her to focus on the present when spending time with her children.

“Having kids is fun, but it’s also stressful.[…] There’s really no manual, so it’s a lot. But at the same time, it takes stamina, and so much energy and time. You have to be willing to devote the time, devote the energy, lose some sleep, and still be able to function and do parenthood. For me, I can sometimes get insomnia thinking about the things I have to do or didn’t do that day, so I’ll smoke a joint, which will help me go to sleep,” Anthony said.

Anthony usually smokes up to three times a day and prefers vaping because it’s the most convenient way for her to smoke.

“I think it’s super discreet — like you can hit one on your lunch break, and no one will know. It also helps me while being a mom, because I’m always looking for the quickest way or the most discreet way to kind of get it in without having to impair myself. I also like bongs because you can get you right quickly, and it doesn’t take a lot of your weed.”

However, Anthony is adamant about not exposing her kids to her lifestyle yet. She shared that a conversation about weed will likely happen with her kids as they grow up.

“I usually do it during nap time or bedtime. […] At our old house, we had a balcony and we would just do it there while our daughter was playing inside. Whatever we’re using isn’t within reach of them either, but I definitely want to make sure that they know there’s nothing wrong with it. I want to introduce them to the many uses of it.”

Fact: I used cannabis while pregnant with this beautiful baby boy I’m holding in this picture. I smoked joints a few times in the first trimester and in the second trimester I used vape pens to smoke cannabis oil cartridges. I even had an edible in my third trimester and I used lots of CBD topicals. And in my case my baby boy wasn’t born underweight due to my cannabis use, as some studies have claimed could happen if you use cannabis while pregnant. He actually weighed 9 lbs. He is hitting all his milestones and most importantly I feel like a sane human, who can take in each moment and love it full heartedly — all or mostly because of cannabis. I’m not saying all women should smoke weed while pregnant or that in some U.S. states there aren’t consequences for consuming cannabis while pregnant. I’m just sharing my experience because it’s a positive one that isn’t heard often enough. #cannamommy #postpregnancy #newbornbaby #newbornphotography #blacklove #blackfamily #momoftwo #bluntblowinmama #csectionmom #cannamamas #cannamoms #familyportrait

Anthony cites her boyfriend, who’s also the father of her kids, as someone who has helped her along her weed-smoking motherhood journey. However, her family members haven’t been as accepting.

“I’m from Georgia, and I was born in Mississippi. Coming from the Bible belt with a Black, Christian family, smoking weed was always viewed as not ladylike,” Anthony said. “I have some cousins who support me, but I have some aunts and uncles who probably wouldn’t approve. My mom and stepdad don’t approve.”

The shame associated with smoking weed is something Anthony believes is deeply embedded in Black culture, and understandably so considering the nation’s history of criminalizing Black drug users.

“The war on drugs basically locked up Black and brown people, so there’s still that fear that if you live in a state where weed is illegal you can risk losing your kids. But if you live in a state where it is legal, I think it’s important to make yourself as visible as possible to just show that there’s more than one way to be a Black mom, and that Black moms don’t all parent the same way — and that’s OK,” said Anthony. 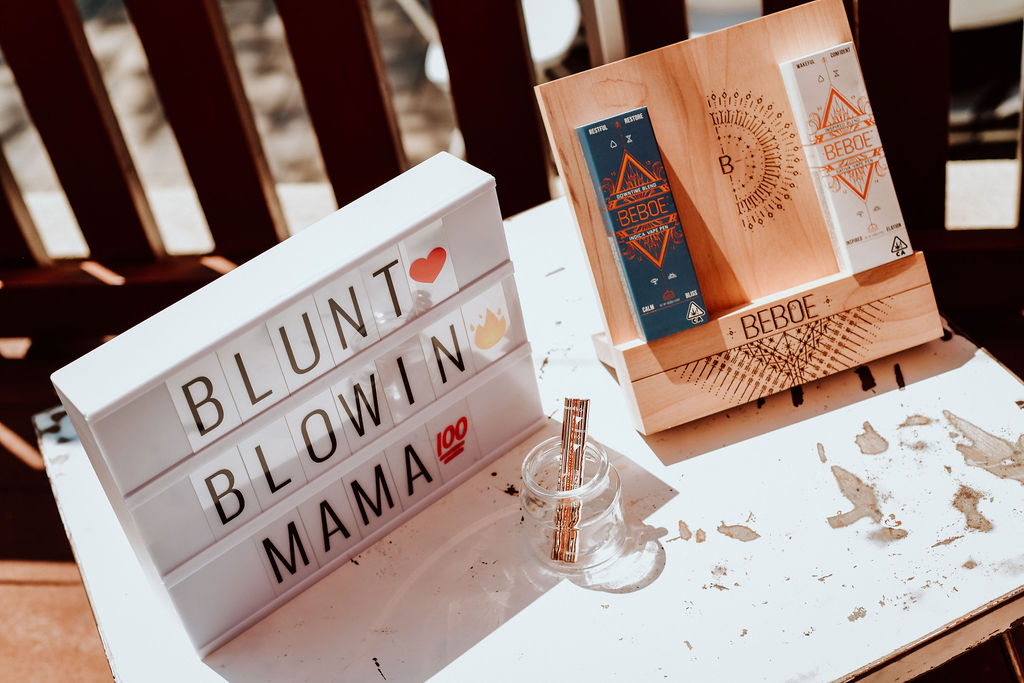 However, with the Blunt Blowin’ Mama podcast, Anthony hopes to help eliminate the stigma and judgment associated with Black moms smoking weed. The podcast recently released its first episode on May 2.

“People have been really positive about it and super excited,” she said. “They would tell me things about how they hoped the podcast was around when they had their first child, and a lot of women are glad that I’m doing this podcast. They have someone like them who’s speaking on these things.”

Blunt Blowin’ Mama episodes air every Thursday via Stitcher. You can also access it on iTunes and Spotify.

“I hope this podcast [will] definitely be in the forefront at the intersection of cannabis and parenthood and starting those conversations,” Anthony said. "[I hope it helps] people realize that this should be normalized, and [is] not some sort of taboo subject that we should tiptoe around.”

Jemele Hill 'Is Not Here To Be Liked.' She's Here To 'Disrupt The System.'