Exclusive: Meet The Visual Artist Behind The Painting That Launched The Bidding War Between Tyler Perry And Blue Ivy

While everyone was focused on the bidding war between the two celebs, we sat down with "The Pretty Artist" behind it.

Overnight success is a blessing of the selective nature, and visual artist Tiffanie Anderson is among the blessed. Earlier this month, the 28-year-old found her artwork at the center of a bidding war between Tyler Perry and Blue Ivy Carter. Anderson auctioned a portrait of Sidney Poitier at the Wearable Art Gala, an event held to benefit the WACO Theater, owned by Tina Knowles and Richard Lawson.

Perry took the masterpiece home, but Blavity wanted a glimpse into the artist’s journey to having A-listers — and their offspring — compete over her artistry.

Anderson, better known as "The Pretty Artist," got her start in the music industry. After graduating high school, the Los Angeles native was cast in the reality TV show “Girlicious.” For three years, Anderson was a songwriter and member of the band. But when the pressures of the music industry began taking a toll on Anderson, she turned to painting.

"I started painting to get my mind off of work just for relaxation," Anderson told Blavity during a phone conversation on Tuesday. “The music industry is 10 percent art and 90 percent bullsh**t."

Her art hangs on the walls of homes and offices of celebrities like Floyd Mayweather, Denzel Washington, Russell Simmons and Jason Derulo. She’s also painted for iconic household names including Michael Jackson, Beyonce and Elizabeth Taylor.

But the contemporary artist’s path to self-made success wasn’t short of tribulations. After leaving the music industry, Anderson was homeless. She often found herself hopping from couch to couch. At one point, she was even sleeping in her car.

"I would only have $60 ... and I would have to decide whether I was going to buy groceries, or buy a canvas," Anderson said. 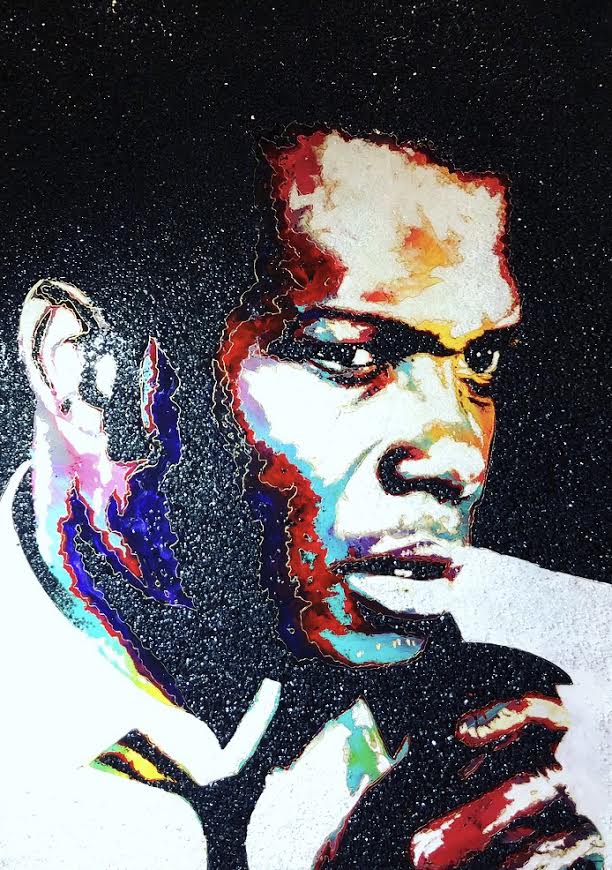 In 2013, she reached out to one of her role models, and her life began to change. When Anderson direct messaged Los Angeles graffiti artist RETNA on Instagram, she was offered an opportunity to work in his studio for a couple of days.

“Getting a front row seat to what I could accomplish if I work hard enough ... it was an incredible experience," she said.

Her advice to upcoming artists is to ignore the naysayers, have faith and stay on the grind.

“I don't believe there is a way to fail with that formula,” she continued.

Unlike most artists, Anderson never received a formal art education. In fact, she didn't pick up a paintbrush until she was in her early twenties. But artistry was in her DNA. Anderson’s grandfather was a realism painter, and her grandmother was an abstract artist.

Today, Anderson describes her artwork as dangerous and unique. Seventy-five percent of her paintings are made from broken glass. She hopes to leave a legacy.

"I represent the modern version of the American Dream. You can come here and have nothing, you can be black, Latino, disabled, you can be whatever,” she said. “If you got the talent and you also got the work ethic behind it, then there is literally nothing you can't accomplish.”

In the future, Anderson hopes to further her work with the Tina Knowles Foundation and open her own gallery. You can check out her artwork at tiffanieanderson.com.