On the growing pains in the season finale of HBO's 'Insecure'

Episode 8 of HBO’s Insecure has managed to leave us all, as the episode title appropriately read, "Broken as F**k." I know I don’t speak for only myself when I say that I stepped into this episode extremely attentive of every social interaction between characters on this show. Tensions were high. Episode 7, “Real As F**k”, left us on a super tense note as Issa and Lawrence’s relationship took a turn for the worst. What was done in the dark (literally, Daniel’s studio was so dimly-lit that you knew something was bound to happen) was brought to the light, and Lawrence was able to find out about Issa’s infidelity.

So here we are, knowing that we’re going to have to just accept whatever happens during the final half-hour of the season, but hoping that it ties any loose ends made over its course. Well, Issa seemed to have found an opportunity to save her friendship with Molly by defending her against their friends, Kelli and Tiffany. It was unclear if Molly’s decision to let it all hang out during the Malibu trip was for her own benefit, or to really drive the stake further into Issa to prove a point (maybe both?), but “New Molly” gave zero fucks and proved it by having a one-night stand with a younger guy.

Molly and Issa’s argument in the last episode made the friendship seem like an almost completely severed connection, but if there’s anything that the hot tub scene proved, it’s that regardless of where you stand, a best friend will always have your back. They managed to patch things up after Issa indirectly, then directly, apologizes for her words. Nevertheless, Molly at least realizes she could potentially be a contributing factor to the change she wishes to see in her own life. Hopefully now, she can skip over the suggested therapy.

While things got heavy for almost every character in the series, Insecure made room for the extreme distress of only one relationship: Issa and Lawrence. Predictably, we knew the season finale would leave us with our mouths agape with incredulity. However, Lawrence’s phone call to Issa from the strip club, though misleading as hell, gave us an actual glimpse of hope. What’s better than cheating on your man, feeling insanely bad about it while regretting every moment of it, and having him say “I miss you” first? All things considered, nothing else in the entire season mattered more than Issa and Lawrence finding their way back to one another, in my honest opinion. Could this possibly mean they’re going to reconcile and our protagonist can have her shot at making things right again with the love of her life? You’d like to think so, wouldn’t you? 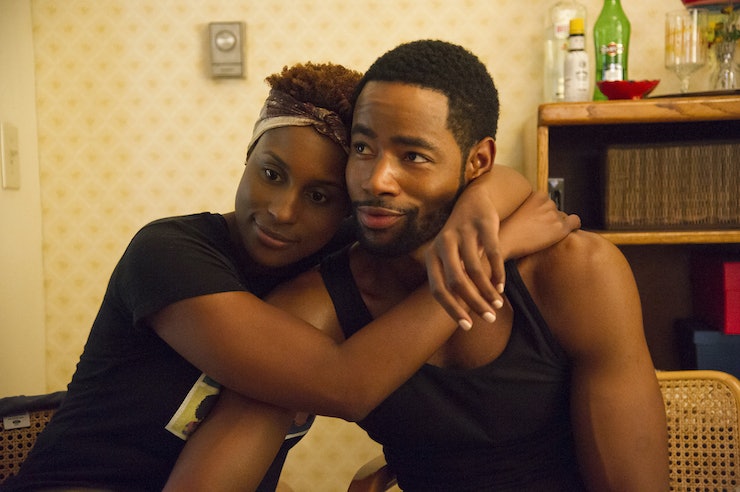 Issa wastes no time rushing back home, thanks to her bestie, Molly, to expedite the process of rebuilding with Lawrence. Let me just say that in the final few minutes of this episode, it was pretty much evident that something was going to shake up our entire world. While everything seemed sweet and that aforementioned tension began to fade before our very eyes, it only resurfaced as Issa pulled up to her apartment. We wanted so badly for Lawrence to be there, reading, watching TV, or doing some nerdy coding for work. We wanted that awkward first hello that you give someone you deeply care about after a breakup. We wanted the feeling of “we’re in a screwed up space, but we’re gonna be alright."

Sadly, you don’t always get what you want. Issa and the rest of us had our hearts ripped out of our chests at the discovery of a departed Lawrence, where the only evidence of that which he left behind were his house keys and his old Best Buy polo shirt. You can literally feel Issa’s whole world come crashing down on her in this very moment. Her hopes were riding on the chance to make up for what she did, but karma came back at her twofold. Then, to throw salt on the proverbial open wound, and like everybody predicted, Lawrence would find solace between the legs of another woman. Just who was that woman, you ask? Obviously, it would be the always eager and readily available Tasha from the bank.

On one hand, Lawrence’s decision to leave Issa was totally warranted. He said it himself, he practically cleaned up his lazy act and got it together for her because she was not happy. While the relationship’s substantial lacking justifies Issa at least taking notice in what else is out there being offered to her (but does not justify her cheating, let’s be clear), Lawrence didn’t deserve to be wronged. He was a good guy with a good heart. Plus, he didn’t want to be the sad excuse of a man that Chad told him he was. On the other hand, I’m personally disappointed in his decision to execute this the way he did. Issa was pretty much certain that Lawrence had left her for good anyway, and from an audience perspective, she had arguably suffered enough. I will say this though: a scorned lover will provide his own closure. Lawrence was genuinely heartbroken. I felt his hurt when he found out about Daniel the same way I felt Issa’s hurt as she cried in Molly’s lap on that “bouch," and it is so unfortunate that the whole damn season came to this.

It’s hard to gauge in which direction everyone will go now. Is Molly really going to turn her life around? Will Issa rebound with Daniel, despite playing him at the fundraiser? Is Lawrence a good guy gone bad? Looks like we’ll have to wait until season two to pick up the pieces.