Single Mom Vs. Single Woman: Is There A Difference?

Let's set the record straight on this debate.

There are different types of "parents." There are biological, adoptive, step, foster parents, etc. There are also different types of "moms."  Stay-at-home moms, home school moms, working moms, etc. They all seem to have well defined titles, missions and clear meanings. However, recently, the title of "single mom" has become blurred and somewhat misconstrued. The definition of a single mom is not so black and white and has been grayed by opinions, social media and even legal advisors. But what exactly is a single mom? Who defines it and why has this become a varied opinion, as opposed to a concrete term with clear meaning?

Let's start by defining the very basic term, "single." According to Dictionary.com, the term "single" means solitary or sole; only one in number. This term becomes slightly indistinct by becoming more descriptive by the good ol' IRS. According to the IRS, single means, "unmarried, legally separated by divorce or have lived apart from your spouse for six months or more in the calendar year." This leaves the door wide open for individual interpretation when the word "parent" is added. Single, defined by the IRS, is designed for the single PERSON, not single PARENT. These definitions leaves society to rely on itself to figure out what a single mom is (and we all know that society does not have the best track record of figuring things out on their own).

Recently, there has been an influx of postings on social media of the following quote:

"If your child's father is emotionally, physically or financially available to their child, you are not a single mother, you are a single woman." 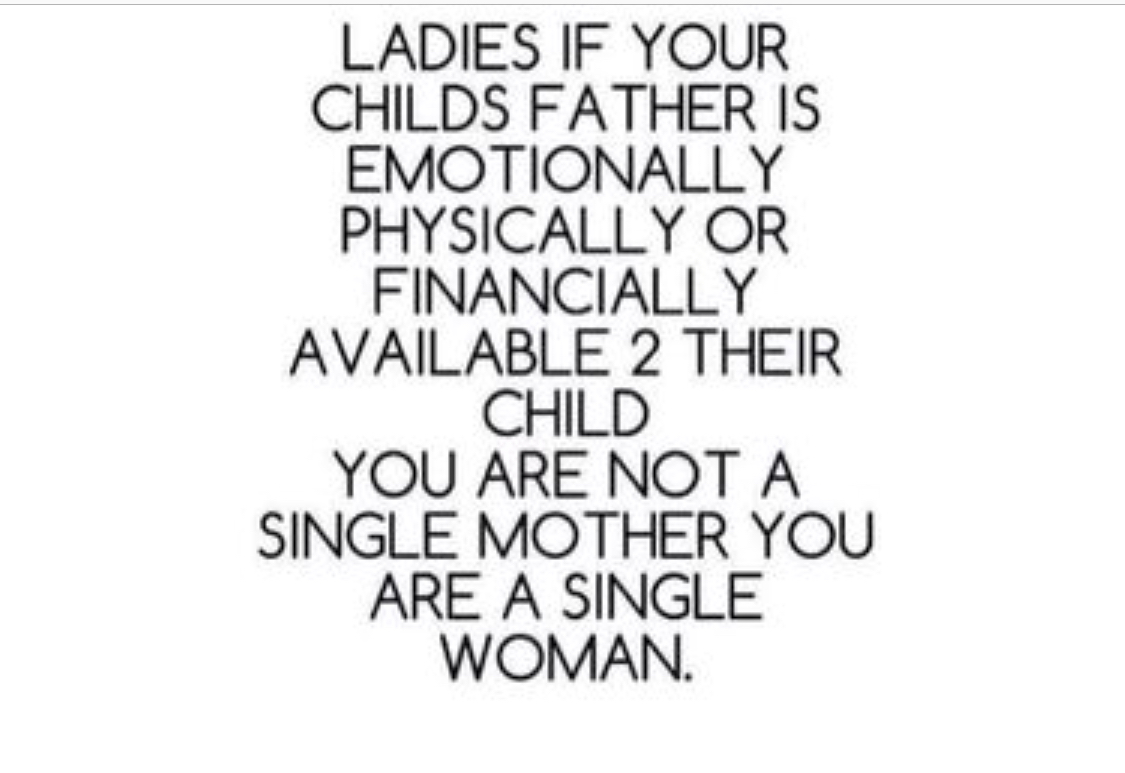 If a woman receives all three elements mentioned (emotional, physical and financial availability from the child's father), equally and consistently (key words, folks), then perhaps a better term would be "primary parent" or "co-parent." However, if any one of the three are missing and the mom is pulling the weight in any of the three categories, she could be defined as a single mother.  The moms that unfortunately don't have any of the three elements, might say that they are "true single moms" because they don't get any help at all. But while their feelings are extremely valid, any mom who is doing more than her fair share of 50 percent of a two person job, should be considered a single mother.

Let's try some different perspectives. If someone won the lottery for two million dollars and someone else won for 50 million dollars, they are both still lottery winners. One is not more true than the other. If you made chili with turkey meat as opposed to hamburger, it's still chili. If a woman had a C-Section vs. vaginal birth, she still gave birth (another weird trending debate to touch on later). So although there might be different levels or variations, a mother that is doing a majority of the work should be considered a single mother.

Comparing the daily, weekly, yearly and forever duties of a single mother to a single woman is comparing apples to oranges. Comparing the actual job of being a single mom to that of a relationship status is an unfair attack on single motherhood. Being a mother is a thankless job — one of the hardest jobs that one could ever sign up for, whether it be alone or not. The attempt to downplay those that are doing a majority of the work is slanderous and almost presents the idea of one crying wolf. Every situation is different, therefore it will never be black and white. However, if a woman defines HERSELF as a single mother, one should be respectful and identify her as such. These interpretations of what a single mom is should be left for self identity, not those on the outside looking in.