Dozens of schoolgirls gathered outside of Pretoria High School for Girls in South Africa Friday to protest an ongoing dispute about racist hair policies and reports of students forced to relax their hair. Black students have also reported teachers and administrators denouncing their afros, referring to them as "untidy" or "unkempt".

The school's policy calls for "neat" and forbids "eccentric" hairstyles. 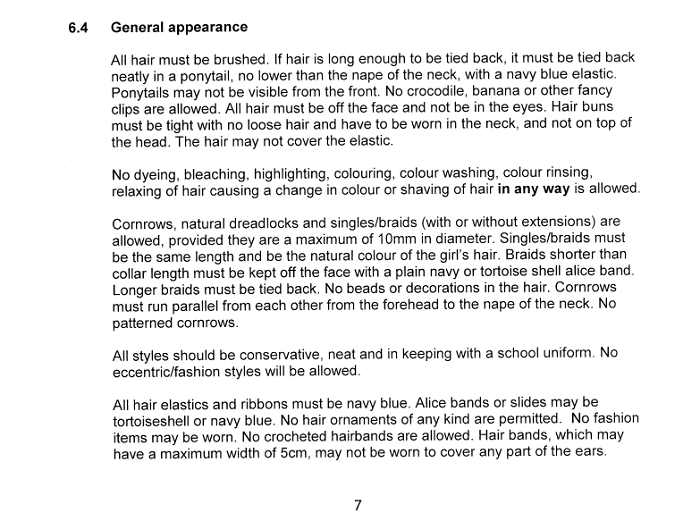 Students also say they're banned from speaking their native languages.

School rules forbid us from speaking our home languages during school hours. 'No foreign languages' it read. #StopRacismAtPretoriaGirlsHigh

A petition to end the school's practices singling out black and Muslim students has reached nearly 6,000 signatures. The Stop Racism at Pretoria Girls High petition reads: Right now, learners at Pretoria High school are demanding that racist practices at the school are brought to an end. Girls attending the school have been forced to straighten their hair; are accused of conspiring when standing in groups and face other intolerable comments and actions
We stand in solidarity with the learners, who marched at the school on the 26th to say enough is enough. It is unacceptable that in a country in which Black people are a demographic majority, we still today continue to be expected to pander to whiteness and to have it enforced through school policy

Panyaza Lesufi, is the MEC for Education in the Gauteng Province and says he is aware of the petition. He wrote on Twitter, "Leave everything with my team. This will end."

Lesufi visited the school Monday, greeted by students and parents.

Lesufi: You sent me a petition. I want to hear the issues you want to bring to my attention #PretoriaGirlsHigh @AfriNewsAgency

Mother of #PretoriaGirlsHigh learners: When we pay fees, our money is not BLACK @AfriNewsAgency pic.twitter.com/ROd8bJaazf

Lesufi in second meeting with representatives of the school, and the learners #PretoriaGirlsHigh @AfriNewsAgency pic.twitter.com/aN8IPCq5yT

Images of the girls and their bravery circulated on Twitter.

Their classmates even supported the protest.

I AM SO PROUD OF MY FRIENDS!!
(photo by me)#StopRacismAtPretoriaGirlsHigh pic.twitter.com/IaojKVrdHn

Police were dispatched to the scene, although a large majority of demonstrators were minors.

#StopRacismAtPretoriaGirlsHigh WHY BRING DOGS AND GUNS ON CHILDREN. YOU WOULDN'T DO THIS IF WE WERE WHITE pic.twitter.com/GgshrHT0V5

The feels. The chills. School girls threatened with arrest. And how they respond ✊🏾 #StopRacismAtPretoriaGirlsHigh pic.twitter.com/DNr1lhpiN4

On Friday, a teacher was filmed as she tried to snatch a phone from a student.

The same war our forefathers fought is the same war we are fighting today. #StopRacismAtPretoriaGirlsHigh pic.twitter.com/ysrMrLQFCL

Prime example of why it's never "just hair." #StopRacismAtPretoriaGirlsHigh

Wow I'm in tears at this #stopracismatpretoriagirlshigh

Why must we be told by white people how we should wear our natural hair IN OUR COUNTRY??? OUR LAND😐 #StopRacismAtPretoriaGirlsHigh

The fact that they had to protest for what they were born with is MY PROBLEM. Why were they forced to change?#StopRacismAtPretoriaGirlsHigh

They were threatened with disciplinary action if they protested at the school. So proud they did it anyway #StopRacismAtPretoriaGirlsHigh

#stopRacismAtPretoriaGirlsHigh
Parents of this uncompromising girl must be proud. Young people conscious of rights pic.twitter.com/sEBGdSpOTX

My sister's afro is out and isn't here to play. Solidarity! #StopRacismAtPretoriaGirlsHigh pic.twitter.com/A7EPVh1sA6

Black children are constantly plagued by similar issues involving their hair here in the states. In 2009, a teacher punished a black student by cutting off a braid from the girl's head as the class watched. A few years later, an Orlando girl was told by administrators that her hair caused a distraction which is against school policy and grounds for expulsion. More recently, a group of high school students in the Bahamas say they were threatened with a suspension over their natural hair

News
This 3-Year-Old Leading His Preschool Class In Prayer Would Make Your Pastor Proud
News
Brooklyn Philanthropist Known As 'Santa Claus Of The Block' Found Dead In His Brownstone After It Was Set Ablaze
Opinion
Black Kids And Suicide: Why Are Rates So High, And So Ignored?
News
Husband Serenades Wife With Daniel Caesar's 'Get You' Before Her Cancer Surgery In Tearjerker Of A Video
X