How 'Lemonade' made me a BEYliever

Although I disagree with the majority of  bell hooks’ latest critiques of Queen Bey, I never truly considered myself an honest member of the Beyhive. As a tried and true '90s kid, I, of course, choreographed many a sassy dance to Destiny’s Child hits in my friends’ basements, but as her career progressed, I saw a lot less vocal talent and honest artistry from Ms. Knowles. Despite my undeniable respect for what some consider the leader of the free world (and I mean she kind of is when you think about it), it seemed like every time a Beyoncé song would come on the radio all I could hear were screaming lyrics without any real substance. Needless to say, I often turned the station rather than suffer through one more Sasha Fierce track

For the past couple of weeks, however, I have been singing a completely different tune.

Viewing the masterpiece that is Lemonade has given me a new lease on a Yoncé- centered lifestyle. The release of “Formation” alone woke me from the dead, but the visual album as a whole offers a perspective of renewed admiration, power and respect for Beyoncé as an influential artist. In today’s world, the music industry is far too often clogged by Top-40 hits whose only message consists of consuming dangerous amounts of drugs and alcohol and simultaneously degrading the very female form that births life into existence. In a world where most music seems to have lost all positive and proactive meaning, Beyoncé emerges from the ashes with a proverbial Oprah-like sack of justice for black America Photo: The Odyssey Lemonade comes at such an imperative time in our history as a people. Paradise has begun to perish – the black First Family will soon disappear from the White House, and now more than ever it's crucial to remind everyone that black lives do, in fact, matter. Through the miraculous construction of such a remarkable visual album, Beyoncé has done more than just create music, she has crafted what can be considered as no less than pure art. She has undeniably given a voice to the voiceless. Viewing Lemonade, I was joyously found in sensory overload from the amount of melanin that was running through my veins right down to the very core of my soul. In the world of objectified black bodies and hip-hop video girls, such a sheer abundance of encouraging black girl magic is practically unheard of. Through masterful references to slavery and police brutality, Queen Bey reminds us of the physical and metaphorical chains that our people will forever carry with them, all the while making sure the viewer understands that the reality lies within the truth that..

“The most disrespected person in America is the black woman.” - Malcolm X Photo: Vogue People are so hype off the fact that this album is pretty much Beyoncé publicly murdering Jay-Z in cold blood for cheating on her; every faithful member of the Beyhive has been reborn as private investigators in order to find out who "Becky with the good hair" is. Although my feminist heart was alight with pride during “Hold Up," it’s hard to ignore the truths of blatantly patterned infidelity. Being raised by my mother and grandmother, two exceptionally strong and unwavering independent black women, has taught me to have a very rightful short-circuited patience for men. I’m constantly checking myself, making sure I’m most certainly not wasting time on those that don’t deserve it, giving me an obvious and understandable zero-tolerance cheating policy. So when I heard that Jay had the audacity to mess around on the queen to end all queens, I naturally assumed she had left him and was going to raise Blue on her own (possibly with the help of her mother and sister)
Before I saw Lemonade, I have to say that I was a bit disappointed in the example she was setting for herself, her daughter, and frankly women everywhere. Why would she take him back? Why would she say this was basically okay? “Daddy Lessons” shows us that a marriage shattered by infidelity was practically inherent for her, so why would she continue to pass on such a broken torch to her own daughter? But as I watched further I began to understand why she might have stayed. Not only has she not been taught any better, but perhaps she recognized something worth fighting for.

“My love was stronger than your pride.” - Beyoncé, "All Night" 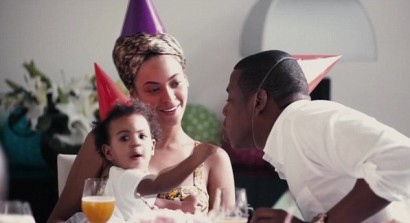 Photo: Dailymail I came to realize that I very much needed to take a moment and stomp on my own wrongfully judgmental feet. Acknowledging my own family history, I had to consider that there's an immense strength and power in working things out. Staying or leaving doesn’t make you weak, it’s about giving family and love their best chance. It’s about constantly being gifted lemons, but always finding a way to make lemonade.

READ NEXT: Someone asked him “are women who wear makeup dateable?” You have to hear his response.