#S4MBlerds: Why Miles Morales is the Spider-Man young blerds need

I am a second generation blerd. Comic books, sci-fi and fantasy have always been a part of my life by default and design. My father's favorite superhero is Thor – the one in the wheelchair. My mother read the Sunday comics religiously until we stopped getting the paper. He's a Trekkie (Benjamin Sisko is his favorite Starfleet captain). She calls people muggles in real life
I spent many hours of my early childhood sitting on my dad's lap while he built barracks in Warcraft: Orcs & Humans and reading fairy tales about worlds far away with my mom. Both my parents watch the Lord of the Rings movies in marathon-like succession on DVD at least 10 to 12 times a year. Like some children inherit sports team affiliations and alma maters, I inherited blerdom

Photo: Giphy When my parents were young, the words and art in comics jumped off the page. It was an immersive experience. He did his very best to see himself in that wheelchair, but he never could. Odin's son was the superhero he could only dream of being. She looked for a black shero that saved the day, but there wasn't one. She had to invent her own. Then came Black Panther, followed by Falcon, and John Stewart as Green Lantern. Heroes like Luke Cage, Misty Knight, Storm, Tyroc, Black Lightning and Vixen weren't far behind. These characters with melanin, who looked like them, were reflections of what my parents hoped to become
They were evidence my mom and dad could be black people with principle who, despite being flawed, could fight against evil, win, and help those in need. He believed in them so much, he went to war and became a public servant when he got back home. She dedicated herself to mental health care. As I grew up, they introduced me to the heroes they admired, and as others joined the club we met them together. Whether or not you believe that comic book characters could mean that much to one person, they helped shape how my parents decided to live life — and how I want to live mine 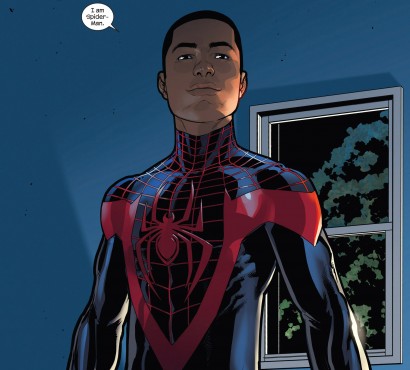 Photo: Marvel Comics Miles Morales' journey in the Ultimate Marvel universe began in the 2011 Ultimate Comics: Spider-Man, created by Brian Michael Bendis and Sara Pichelli. Just like the homie Young Thug, he's from "a nudda earth." In Ultimate End #5 the Ultimate universe was destroyed and we discovered that the hero transitioned to the Earth-616 Marvel Universe proper. His mother was returned to life and fans wondered what his place would be in the pantheon of superheroes that exist in this incarnation of his existence
The most recent issue of Secret Wars, released January 13, gave us a chance to see exactly how Miles ended up where he is now. Because of a run-in with Molecule Man and the gift of a hamburger, we see YG Morales and his OG Peter Parker looking over New York City, ready for the next adventure

Photo: Giphy On February 3, the first issue of Spider-Man will be out for sale. Catch Miles doing work as a member of the Avengers and solo dolo as the official trill young web-slinging defender of the five boroughs

Check out the preview pages. 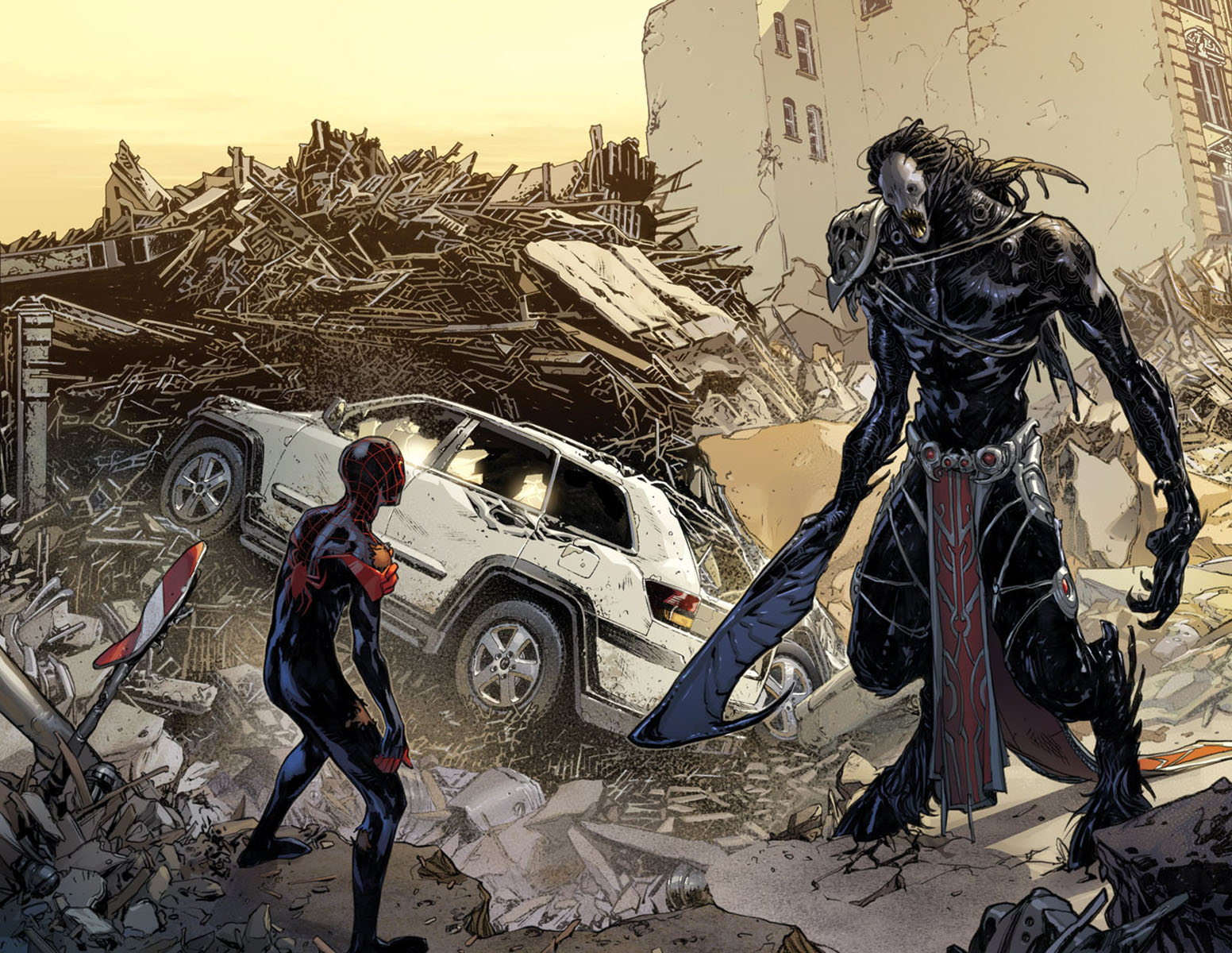 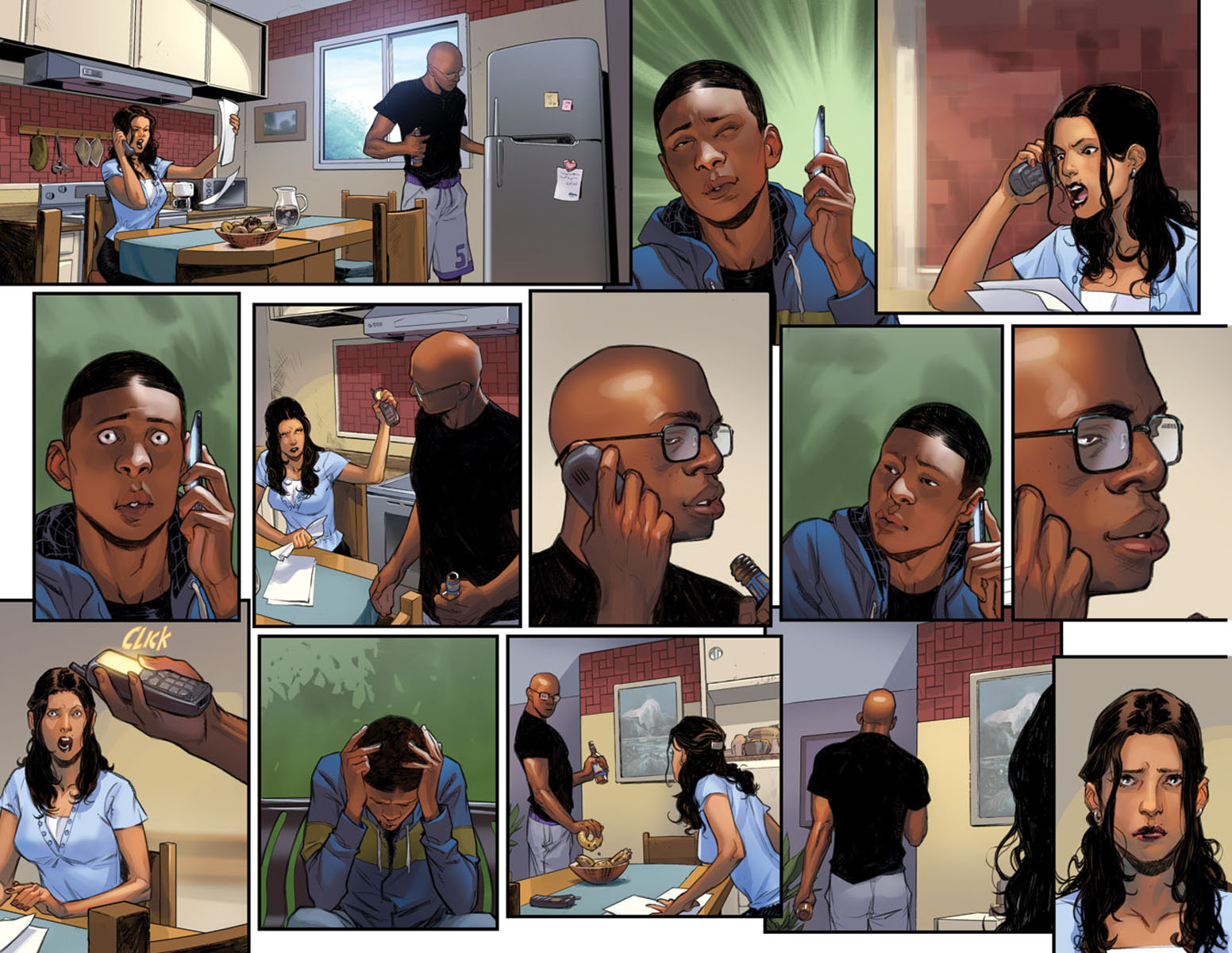 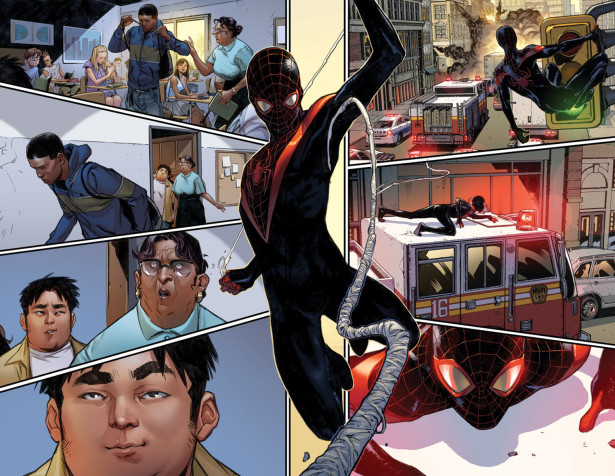 Photo: Comic Book Resources This is a time where representation in entertainment for people of color, but specifically young blerds, is of the utmost importance. Because for entirely too long, comic books have been considered a white-male specific hobby, which couldn't be further from the truth. Events such as the Black Comic Book Festival at the Schomburg Center for Research in Black Culture in the New York Public Library are proof that comics are beloved in our community. Miles Morales, Lunella Lafayette, Adrienne Ashe, Amadeus Cho, America Chavez, Tanya Spears, Kamala Khan, Niobe and many others give a younger generation of superheroes the chance to grow up learning about blerd life, just like my family did. With characters like these in the panels, they will see themselves on every page

I do this because I love the culture and the community. If you enjoyed this post let me know on Twitter and share it with the homies. If you have any suggestions on comics I should write about, things I should write about in the column, or people I should interview, tweet me. Make sure you use the hashtag #S4MBlerds.
X