I commend Ms. Ocasio-Cortez on her primary victory over Rep. Joseph Crowley.  Clearly, she ran an excellent, grassroots campaign.  She has been thrust into the political limelight by her victory.  She’s been doing interviews and campaigning for other candidates around the country since one of the biggest upsets this election cycle.  Rep. Crowley was the heir apparent to Speaker Pelosi and the number four Democrat in the House.  I understand why Ms. Ocasio-Cortez’s victory is kind of a big deal and was shocked as I watched the results the night of the primary.  (I think I’m just recovering from it.) With the exception of seeing her name featured on the list of debates hosted by NY1, I hadn’t heard of her or her viral video until primary night.  There were no contests in my district and I was focused on friends and others I knew who had contested primary races.

It is not easy defeating an incumbent.  They have recognition and usually the support of their party's machine behind them.  This piece is not to take anything away from her victory, but to break down why there are more opportunities for these “upsets” than a person not involved in politics will know. 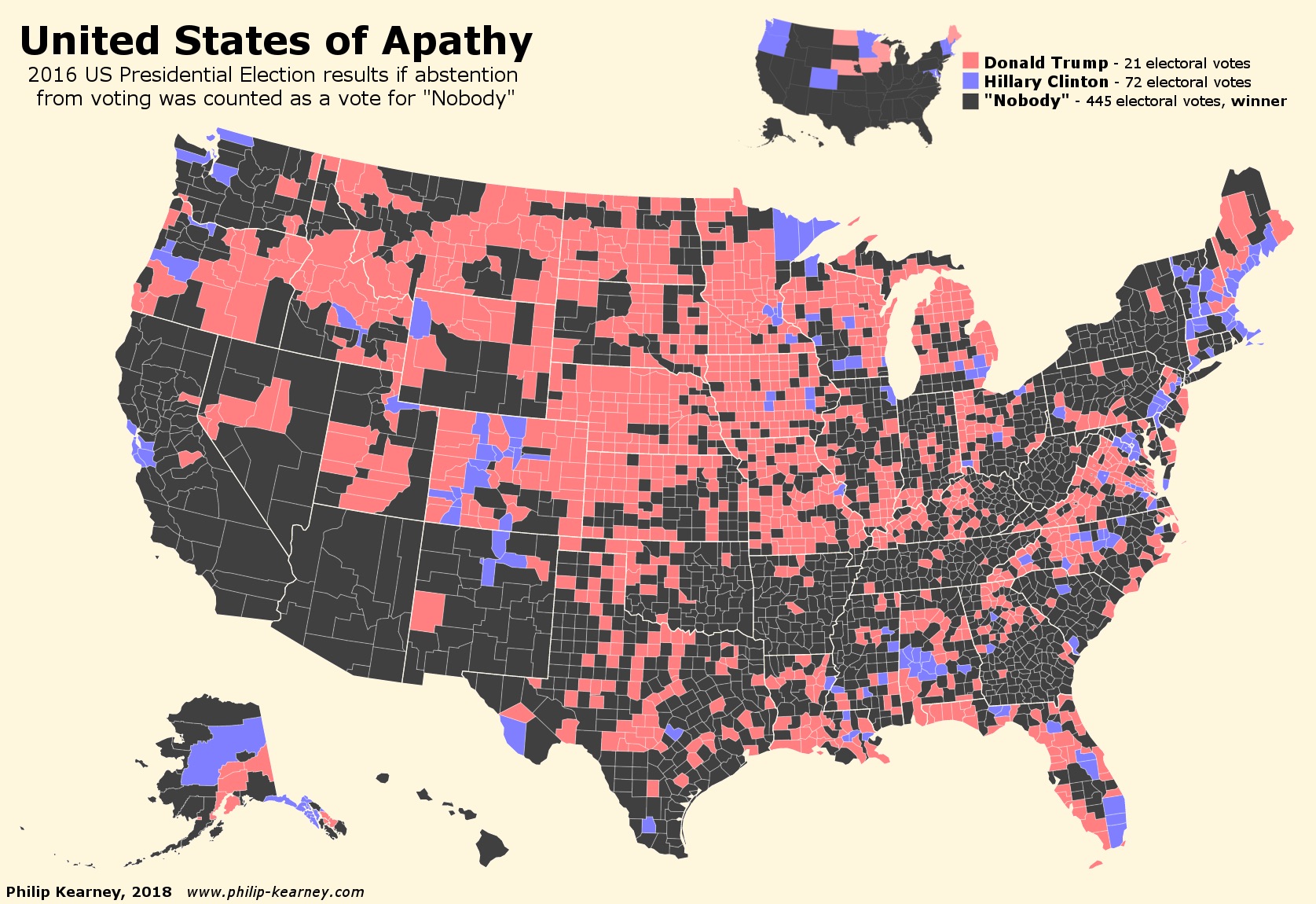 The above graphic is paired with a shocking, but very real headline: “If Not Voting Counted As A Vote for ‘Nobody’, Then ‘Nobody’ Would Have Won The 2016 Election In A Landslide”.  The research tallied the Electoral College count and considered non-voters as voters.  When I say non-voters, I am referring to eligible voters who did not vote in the 2016 general election.  Using this formula, ‘nobody’ would have won the 2016 Presidential election.

In the case of the primary contest between Mr. Crowley and Ms. Ocasio-Cortez, the same is true.  According to the New York State Board of Election’s website, in the 14th Congressional District, there are 214,570 active enrolled Democrats.  The total votes cast in the primary were 27,826.  Democratic voter turnout in the primary was 13%. While Ms. Ocasio-Cortez received 57.13% of the votes cast, she only received 7.4% of the eligible* votes in that district, with Mr. Crowley receiving 5.5%.  (*New York State has closed primaries therefore, only the active enrolled Democrats in the 14th Congressional District, 214,570, were eligible to vote in the June 26th Primary.)  Because the district is Democratic, she is expected to easily win the general election in November.  So, basically, 7.4% of eligible voters, or 15,897 voters, decided who will represent the people of New York’s 14th Congressional District.  A Congressional District consists of roughly 711,000 people.  An additional 186,744 Democrats could have voted in that Primary, but did not.

Based on a study conducted by Pew Research, the United States has one of the lowest voter turnout rates among developed countries.  A small fraction of the population is deciding who our representatives will be.  In our country, with all of the votes left on the field in every election – local, state, federal, primary, and general elections – non-incumbents, underdog candidates would have a fighting chance, if everyone who was eligible to vote did so.

What can you do?

Vote in every election – don't forget the primaries, special elections, and Run-offs.  Never miss an election again by signing-up at TurboVote.org to receive election text alerts.  Make sure everyone in your network is registered and voting.  Check your voter registration status regularly.  Visit Educatedvoter.net for links to nationwide voting resources.

When we all vote, there is an opportunity for something new.