Don't be the reason your business doesn't succeed.

When I was 26 years old, I packed up my SUV, left my comfortable home in Virginia and moved to Los Angeles by myself to pursue a career in entertainment law. I wanted to be known as the Olivia Pope of the entertainment industry. Shortly after moving to Los Angeles, I landed an entry role position at one of the biggest entertainment agencies in Hollywood. Over the next few years, I networked and hustled my way up to the top of the corporate ladder. By the time I turned 29, I was making six-figures at an up-and-coming beauty and lifestyle company working in talent partnerships.

At this point in my career, I had worked with everyone from the Kardashians to Serena Williams. I spoke at conferences across the nation about my professional experiences and was asked to join the Emerging Leaders Advisory Board of the Association of Media & Entertainment Counsel. I had accomplished in just four years what many work their entire career to achieve. From the outside looking in, I was living the dream. But on the inside, there was a vast black hole that seemed to expand with each new accomplishment.

My work felt soul-less. I didn’t like the money-hungry attitude and the profit over people mentality that everyone in Hollywood seemed to possess. No one seemed to know what they valued, or why. I sat in meetings where people cussed one another out over trivial matters, as if we’d been tasked with curing cancer or restructuring the mass incarceration system. On top of all of that, I was more often than not the only Black person in the room. I grew tired of dealing with daily microaggressions and being asked about my hair every other week.

Eventually, my discontentment became impossible to ignore. Monday became my least favorite day of the week. I dreaded waking up in the morning. Some days, I carried so much anxiety that I physically couldn’t get myself out of bed in the morning. When I did make it into work, it was hard to focus. I often found myself sitting at my desk, daydreaming about everything else I’d rather be doing. After years of soul searching, and some clarifying conversations with my therapist, I decided I needed to make a change.

In February of 2020, I left my full-time job as an attorney to become a full-time small-business owner alongside my partners Michael Nelder Henderson and Brian Taylor. Our vision was to create a platform to share stories that would change the world. We developed a card game called LikeU Cards — an ice-breaker game that would allow people to figure out what they have in common through a series of thought-provoking questions. I was terrified about letting go of my cushy salary and high-title, but excited about finally being able to work on a project I believed in. And then COVID-19 happened. 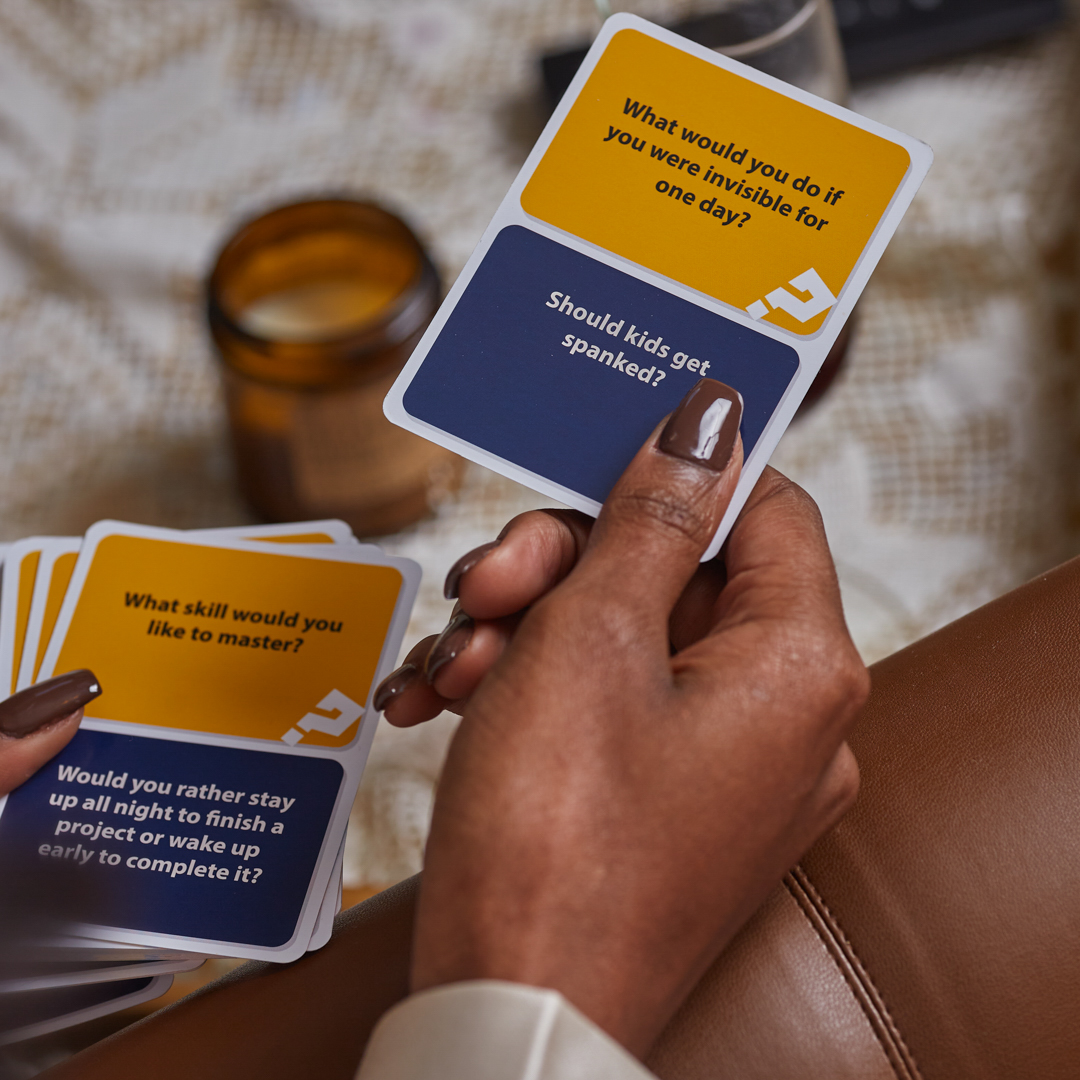 Our marketing and sales plans were flipped entirely upside down. Most of the conferences and events we had initially planned to sell our cards at were canceled. Local and national retail establishments stopped purchasing inventory. We were forced to rely solely on e-commerce and digital marketing, but since we had already spent a pretty penny on buying thousands of units of inventory, we didn’t have the funds to pour into a marketing budget.

Nevertheless, we persisted. We posted about our card game on social media and sent emails to friends and family about what we were up to. Slowly but surely, the word began to spread. High school teachers loved using the cards to build relationships with their students. Friends used them on dates to make conversation. As racial and political tensions grew over the course of the year, families with different ideologies and from different generations used them to reconnect and better understand one another. In October of 2020, we signed a purchase order with our very first retail establishment to sell the cards in stores.

Why am I sharing this story? Because we are living through an unprecedented time of economic uncertainty. No one knows what long term effects this pandemic will have. Over 31 million people are currently unemployed, and businesses across the country are being forced to shut down and lay off employees at alarming rates. But that doesn’t mean it’s impossible to start a successful business during the pandemic. In fact, for those who don’t have a job, now is arguably a great time to become a small business owner.

Black people make up almost 13% of the U.S. population, but only own 4.3% of businesses. Compared to our white counterparts, we often lack the resources and connections necessary to run a small business sustainably. If you’re thinking about starting a business, I’ve compiled a list of 10 practical tips to help you set yourself up for success:

1. Know your company values, and lean into them.

Now more than ever, people want to know not just what you have to offer, but what you stand for as a brand and a company. If your company values are not in line with your own personal values, you may have a hard time staying engaged or coming off as authentic.

2. Start with a business plan!

Before jumping in, make sure you outline your offering, identify your market and know your competition. You can join my mailing list to get a free business plan template.

3. Educate yourself on your industry.

4. Make sure your business is a validly existing Partnership, LLC, or corporation in your state.

If you want to secure a bank account, an EIN number (which is like a social security number for businesses) or a government grant, you’re going to want to make sure your paperwork is all filed correctly and on time. You can use websites like LegalZoom to help you with your business formation.

5. Check the U.S. Patent and Trademark website to make sure your business or product name isn’t already trademarked by someone else.

The last thing you need is to receive a cease and desist letter in the mail. If you have an extra $225, you may also want to file for a trademark. If you don’t, all is not lost! You will receive some common law protection as soon as you begin using the mark in commerce.

6. Unless you are an expert at taxes, find someone to help you with your business taxes!

Keep in mind that you are responsible for filing both your federal taxes and your state taxes, and every state has different tax requirements.

7. You don’t have to spend an arm and a leg on marketing and promotional material.

You can use resources like Canva and Fiverr to get high-quality logos, graphics and other promotional materials at extremely affordable rates.

8. If you’re on social media, there’s no reason not to post something related to your business every day!

Instead of sharing another #tbt to last year’s vacation, let your friends and family know what you’re working on. Social media is a form of free marketing! Use it well.

9. Set aside time every month to apply for small business grants.

There are plenty of resources available online for minority-owned businesses, female-owned businesses and businesses serving niche industries. Hello Alice is a great resource to stay up to date on small business grants.

The world is changing, and quickly. Keep an open mind, and be ready and willing to adapt to new ways of doing things.

I believe there’s room for all of us to thrive in our respective industries. I’m rooting for all of you to be successful! And I hope you’re rooting for me, too.

Allow me to introduce myself. I am Kiara Imani, an attorney, writer, speaker, content creator and co-founder of The Auditory Museum  — a company specializing in communication and storytelling. I am also the host of the ‘Sworn Testimonies’ podcast. I graduated from the University of Virginia School of Law, and received my bachelor's degree from the University of Virginia in 2011 with a major in political science, specifically focusing on politics in the media.