13 Young Black Poets You Should Know

April was is in full swing last month and the air is filled with poetry and spring. In honor of National Poetry Month, here’s a list of young black poets you should know. Follow them on Instagram and Twitter, and let their poetry fill you with inspiration to jot down (or shout out) your own verses

Danez Smith is a spoken word artist best recognized for inspiring the soulful beat within listeners with his poem, “Twerking as a Radical Act of Healing.” Within his poetry, Smith utilizes a mix of commanding rhythm and language to address the intersectionality of race, sexuality, and personal and social identity. He is the author of [insert] Boy and the chapbook hands on ya knees, and is a founding member of multicultural spoken word group, Dark Noise Collective. Check out his amusing, insightful tweets @danez_smif
Poem to check out: “Twerking as a Radical Act of Healing”

Once described as “[t]he true definition of an artist” by Harry Belafonte, Aja Monet is a world-renowned poet, singer, educator and human rights activist from Brooklyn, NY. She is the youngest person to win the legendary Nuyorican Poet’s Café Grand Slam title, has performed at NAACP’s Barack Obama Inaugural event, and has been named “One To Watch” by the YWCA. She currently teaches the therapeutic beauty of poetry to inner city kids as a Teaching Artist for Urban Word NYC and Urban Arts Partnership in NYC. Check her out on Twitter @aja_monet
Poem to check out: “You Make Holy War”

Cornel West just got him a copy of The BreakBeat Poets edited by @kevincoval @illuminatemics Quraysh Ali which I, and many other amazing writers are in. Get yours. Third time meeting Cornel. Shout out to The Chicago Teachers Union.

Dubbed “the Gil Scott Heron of his generation” by civil rights activist Dr. Cornel West, Malcolm London is a quadruple threat as an award-winning poet, educator, organizer and TED Speaker. Only 21 years old, London has won awards at the Louder than a Bomb youth poetry slam, has performed poetry about the front lines of high schools in a TED Talk and has been featured on national news outlets, including NPR, The Chicago Tribune and The Root. London divides his time between shedding light on the juvenile justice system as coordinator and advocate of Northwestern Law School’s The Know Your Rights Project and educating young folks on the power of writing and performance as a teaching artist at Young Chicago Authors. Check out this black power ranger drop knowledge on social issues within his native Chicago on Twitter @MalcolmLondon.   Poem to check out: “Never Too Late”


because national poetry month, here is 16 year old safia reading poems out loud for the first time A photo posted by Safia Elhillo (@safiamafia) on Apr 2, 2015 at 2:38pm PDT

A Sudanese by way of Washington, D.C., by way of NYC, Safia Elhillo is a lyrical poet whose raw words leave her listeners (including yours truly) spellbound and begging for more. Among her increasing list of accomplishments, she has released her first collection of poems, has been published in several anthologies, including music-themed Again I Wait for This to Pull Apart, and has shared the stage with music legends Gil Scott-Heron, Faith Evans and ?uestlove. Her latest manuscript, asmarani, was recently selected by Kwame Dawes and Chris Abani for the 2016 New African Poets chapbook box set.  She is currently pursuing an MFA in poetry at The New School in NYC. Follow her on Twitter @mafiasafia where she shares the dates and venues of her latest performances
Poem to check out: “self-portrait with dirty hair”

She may call herself “she who wrestles with God”, but Alysia Harris is undoubtedly a goddess of verse. Harris first garnered wide attention for her passionate poem “That Girl” on HBO’s Brave New Voices, and has since squeezed the hearts of her audience as a member of The Strivers Row, a spoken word collective. This month Harris and fellow poet/friend Jasmine Mans will document their encounters and experiments as sister artists of color on their MOMMA atlas poetry tour. Follow her on Twitter @Poppyinthewheat for the latest tour dates
Poem to check out: “Death Poem”


Reading at the Poets House in NY / Always and forever reppin' home. A photo posted by Hanif Willis-Abdurraqib (@nifmuhammad) on Mar 21, 2015 at 3:51pm PDT

Hailing from Columbus, Ohio, Hanif Willis-Abdurraqib is a poet, author, editor, teaching artist and an ice cream enthusiast. When he’s not repping Ohio in occasional poetry slams or hosting readings and workshops across the States, he’s editing pieces for Blavity and interviewing for Union Station Magazine. His work has been featured in numerous journals, including Borderline, Muzzle, Radius and Vinyl, and he has two poetry anthologies, The Crown Ain’t Worth Much and Again I Wait For This To Pull Apart, slated for release this year. He is also the founder of Columbus-based open mic Pen and Palette Poetry, and has been awarded the 2014 Capital University poetry prize for his poem “Hestia.” Chat with him about poetry, sneakers and music @nifmuhammad
Poem to check out: “When We Were 13, Jeff’s Father Left The Needle Down On A Journey Record Before Leaving The House One Morning And Never Coming Back”

Chicago-bred Phillip B. Williams is the author of chapbooks Bruised Gospels and Burn, and his work has been published in several journals, including West Branch, Kenyon Review Online, and The Southern Review. He is the editor of Vinyl Poetry and a Cave Canem graduate. Check out his Twitter feed @pbw_poet, where he shares his love of music and poets to watch
Poem to check out: “Of Darker Ceremonies”

Bettina Judd infuses her verses with the musicality of black feminism in her works as a singer, poet, and interdisciplinary educator and writer. A Cave Canem Fellow, she’s received a slew of fellowships and prizes, including the Black Lawrence Press Hudson Book Prize for her poetry collection Patient. She’s currently a Visiting Assistant Professor of Gender, Sexuality and Women's Studies at the College of William and Mary. Find her tweeting about her upcoming readings and all things Scandal @bettinajudd. Poem to check out: “Binding”

#Throwback #poem by me, from Tuesday, An Art Project. I miss those postcard poems.

Appropriately named Queen, Khadijah Queen proves that she’s royalty at intertwining the personal with the political to deconstruct the intersectionality of black identity. Her widely reviewed works include chapbooks bloodroot and No Isla Encanta, poetry collections Fearful Beloved and Black Peculiar, individual pieces appearing in countless magazines and anthologies, such as The Force of What's Possible and CURA. At the moment she is wielding her intelligence and insight as board chair of Kore Press, and will soon join the core faculty of Mile-High MFA in creative writing at Regis University. Catch her sharing inspirational and newsworthy gems @1000twists
Poem to check out: “_________________________ overheard, misheard or re-imagined”

One glimpse at Mahogany Browne’s impressive career as a poet, author, journalist, producer and performer proves how much she’s a lyrical and emcee master. A Cave Canem and Poets House alumna, Browne is the author of mini-poems collection Dear Twitter: Love Letters Hashed Out On-line, co-producer of the SoundBites Poetry Festival, and co-founder of Off Broadway poetry production, Jam On It. This year she’ll be releasing three poetry collections: Smudge, Redbone and the anthology The Break Beat Poets: New American Poetry in the Age of Hip-Hop. She is also a co-organizer of #BlackPoetsSpeakOut, an online campaign featuring black poets speaking out on the grand jury decision in Ferguson. Read her tiny letters of gratitude, knowledge and inspiration @mobrowne. Poem to check out: “Brooklyn Tongue I” 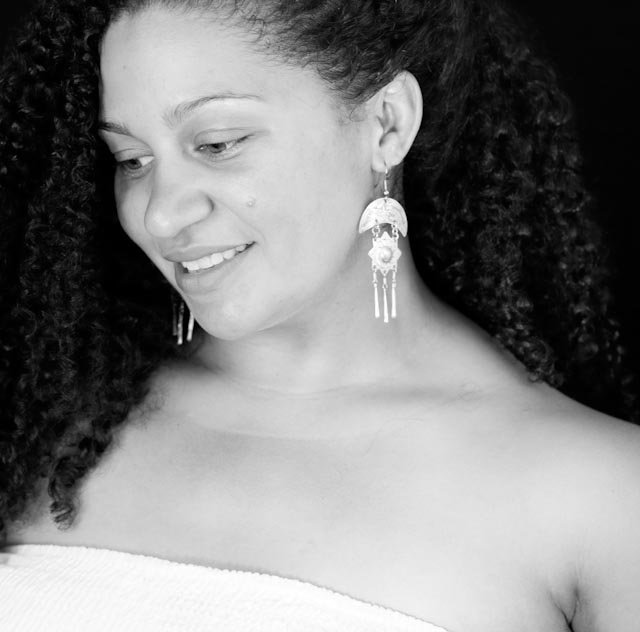 Amanda Johnston wears many hats as a poet, educator, arts administrator, author, coordinator and director. A Cave Canem alumna and co-organizer of #BlackPoetsSpeakOut, Johnston has been published in numerous print and online publications, including anthologies di-ver-city and The Ringing Ear: Black Poets Lean South. She is also the founder and executive director of Torch Literary Arts, a network designed to foster and connect black women through creative writing, and retreat coordinator for the Cave Canem Foundation. Catch her on Twitter spreading the #BlackLivesMatter movement @amejohnston
Poem to check out: “Transition”


Me and my web designer @celsostories accept the silver medal at the 2014 IPPY book awards. #blackandjewish A photo posted by Aaron Samuels (@poetryaaron) on May 28, 2014 at 5:17pm PDT

Blavity’s own Aaron Samuels is an award-winning poet, educator, community organizer and author. He first fell in love with spoken word poetry after being challenged by an English teacher to not break meter. Ignoring the advice, he has gone on to become a celebrated poet, TEDx speaker and a published writer with works featured in Tidal Basin Review, Apogee Journal and Muzzle Magazine. He is also an acclaimed performance poet, having appeared on TV One’s Verses & Flow, HBO’s Brave New Voices, and TEDx Washington University. Listen as he explains his journey from NYC to LA, and follow him on Twitter where he shares his poetry performances @PoetryAaron. Poem to check out: “Translating Jacob”

Barely made it/ barely making it/ but making it

Brooklynite Morgan Parker is a published author, editor, Cave Canem fellow and proud Sagittarius. Her publications include poetry collections There Are More Beautiful Things Than Beyoncé and Other People’s Comfort Keeps Me Up At Night and contributions to Why I Am Not A Painter and The BreakBeat Poets: New American Poetry in the Age of Hip-Hop. She also provides her editing genius to Coconut Magazine and The Offing. Follow her on Twitter @morganapple where she drops verse and shoutouts to other fellow poets
Poem to check out: “If You Are Over Staying Woke”

Have more people the Blavity fam should know about? Shout them out in the comments below.