DJ Tony Drake Tells Us About His Plans To Bring A Hip-Hop, Sci-Fi, Dystopian Show To TV

Drake has created a show called "The Indies," and is currently fundraising for it on Kickstarter.

What would you do to make your dreams come true? How far would you go?

A new series from DJ Tony Drake, The Indies, asks just that question.

“It revolves around the main character, Slick, who wants to be the universe’s next big hip-hop star,” Drake told Blavity, “He’s willing to do anything to make that happen. He winds up meeting a DJ who says, ‘Hey, I can make all those dreams come true, you just need to go ahead and sign this contract.’ So Slick doesn’t read the contract, signs it anyway. Come to find out, he actually signs up to be a hitman for hire.” 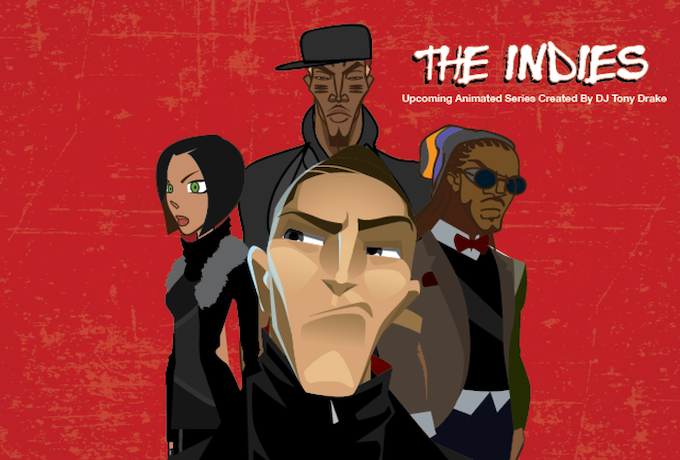 That’s right: The Indies isn’t just your run-of-the-mill coming of age drama; it’s an action sci-fi epic with a hip-hop soundtrack produced by DJ Drake himself.

Like any great piece of art, The Indies began humbly. Originally, Drake set out to make a mixtape.

“I wanted to make a mixtape is because I feel as though there’s a bunch of artists who are just super, super dope, but don’t get the recognition that they deserve. And … I wanted to give them a platform to get that music out there.”

Drake had the skills to make the tape; he’s spun with everyone from Big Sean to J. Cole. And he had the connections to fill the record with great talent from his days in radio. There was just one little problem.

“If we’re being honest with each other, before [this interview], you had no idea who DJ Tony Drake was. My name isn’t big enough to bring that recognition to them.”

The solution? To do something no one else has done before.

“I was like, ‘Everybody and their cousin has a mixtape. What’s going to make it different?’ I’ve always been a huge fan of Afro Samurai, Samurai Champloo, the Gorillaz, so I was like, ‘You know what, it would be dope if I could come up with a cartoon that revolves around this.’”

Drake sat down and drew on his influences to create something brand new. “I would take different elements of different people that I’ve come across or like I’ve seen on television, and built that up into these characters.” 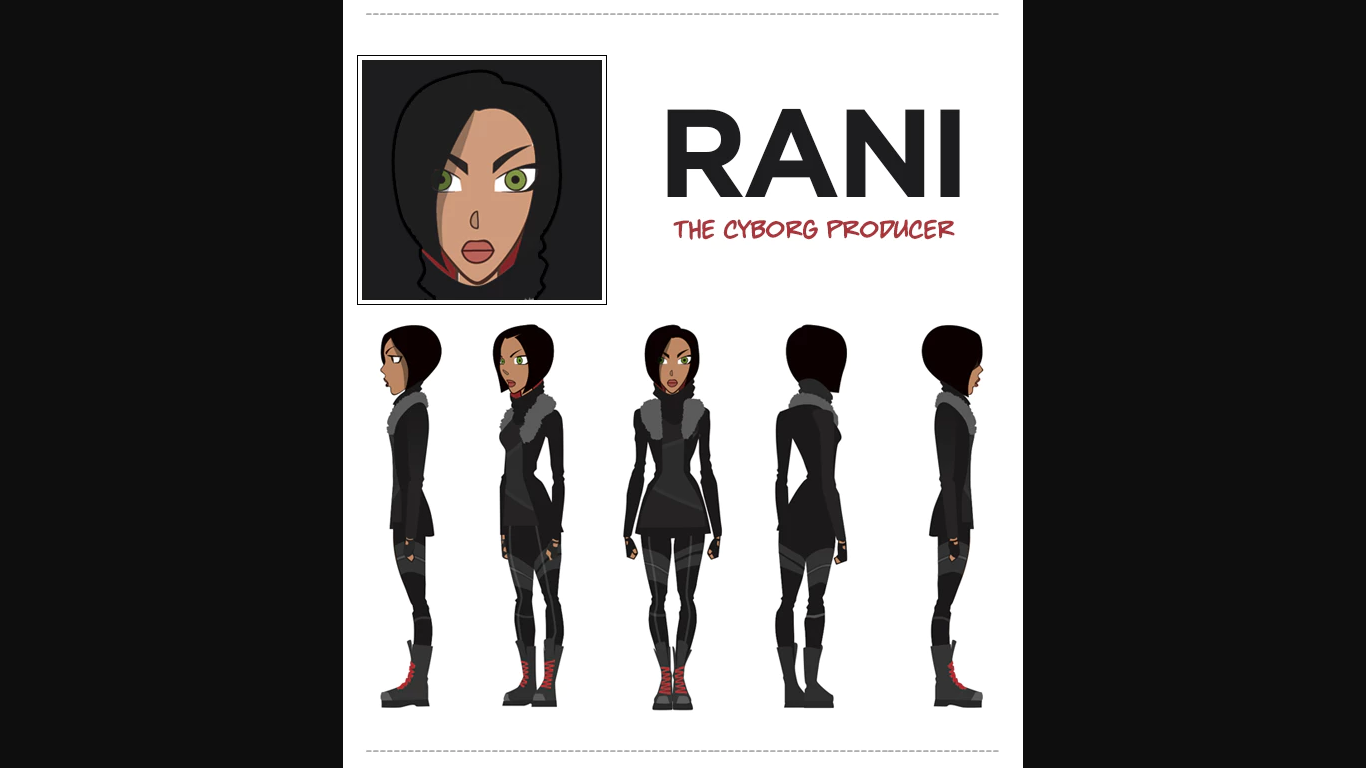 As he created his characters, Drake began to sketch out the look of the world. But he felt he needed help. And so he reached out to his good friend, the visual artist BraeonArt, “an amazing artist out of Baltimore.”

“We sat down, we drew out the characters. We also had another group of people from a company called Common Peoples; they’re an advertising/design firm, and they actually helped design some of the fashions, the costumes that the characters are wearing.” 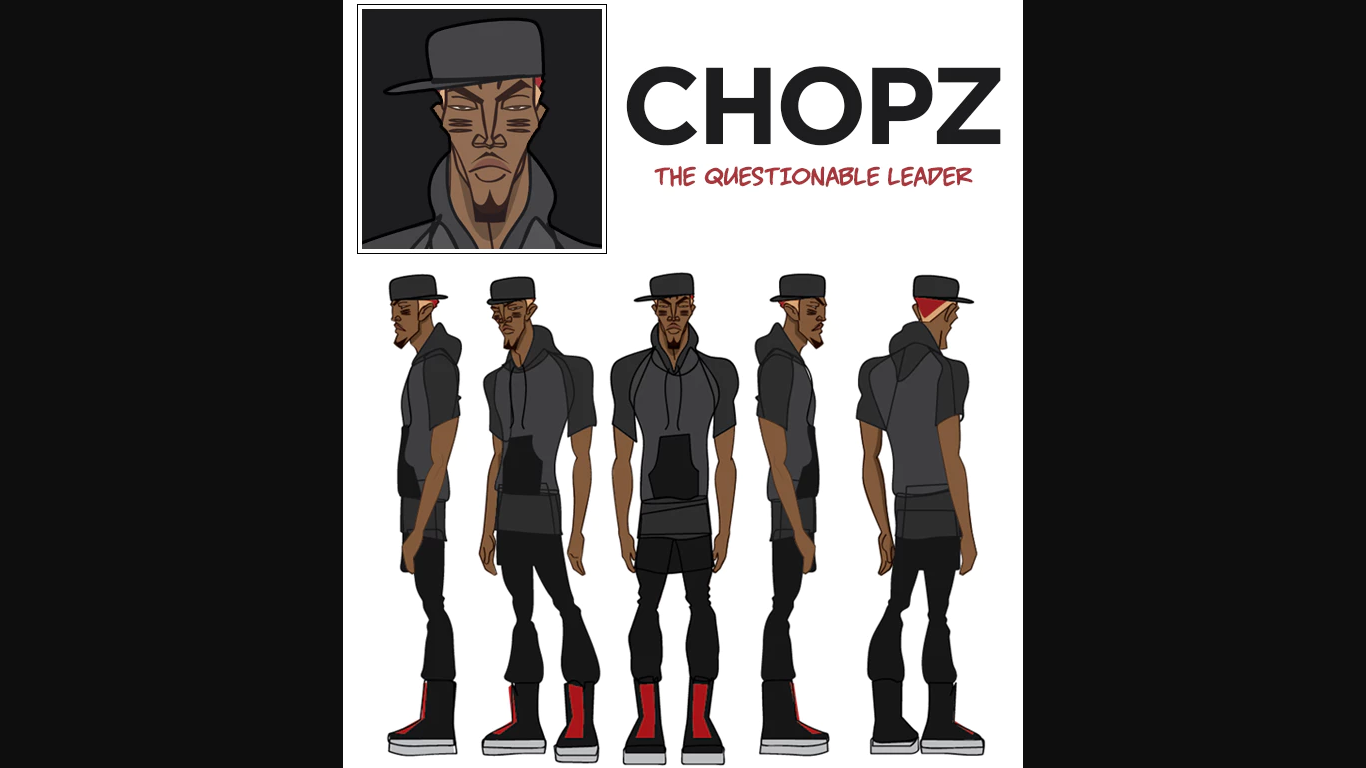 The characters done, Drake wanted to flesh out the world.

“That was actually done by another artist named Jonathan Powell out of Annapolis, Maryland. That was really us collaborating on what would happen once Mother Nature started to take back the Earth.”

Oh, didn’t we mention? The Indies doesn’t take place in some Star Trek-kian utopia. No, Slick and his friends live on a ruined Earth that is a full on dystopia.

“We have a lot of the buildings crumbling, a lot of earth overtaking the pavement and the cars,” Drake said of the world, “It’s something where we wanted to create something that was scary … but something that’s kind of beautiful at the same time.”

Drake very consciously made the choice to set things in a post-apocalyptic world.

“I feel as if though when you set things in post-apocalyptic [futures], the environment looks so vastly different, but you’re still able to relate to it, because it’s like, ‘Oh, well, I know where that is.’” 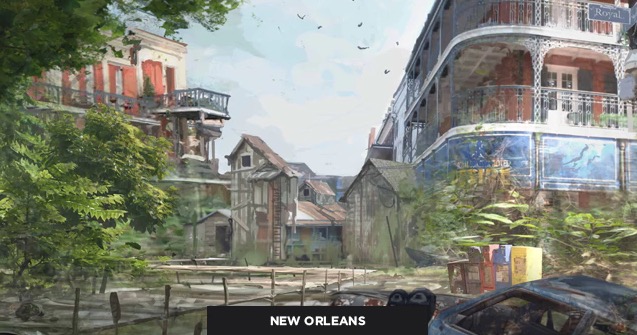 Viewers will be able to see cities they know well, places like New York City and New Orleans, all struggling to survive after the end of the world. 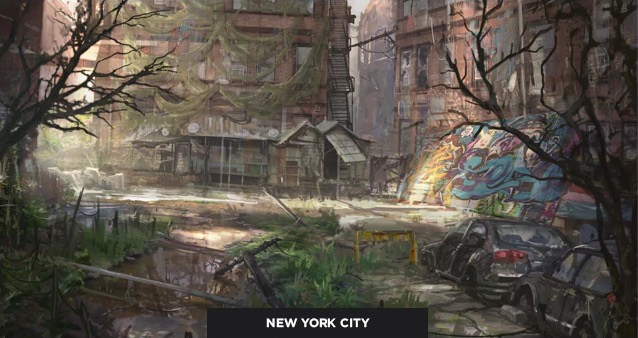 “If you look at some of the concept art that we have, people will always ask like, ‘Well, what world is this supposed to be on? Is this supposed to be Mars?’ And I’m just like, ‘Nah, this picture is actually Las Vegas. And if you look here, you can see different aspects of the Strip.’ And it’s like, ‘Oh, now I can see it.’ And I feel as if though at that point, people kinda get a little bit more connected to the story.” 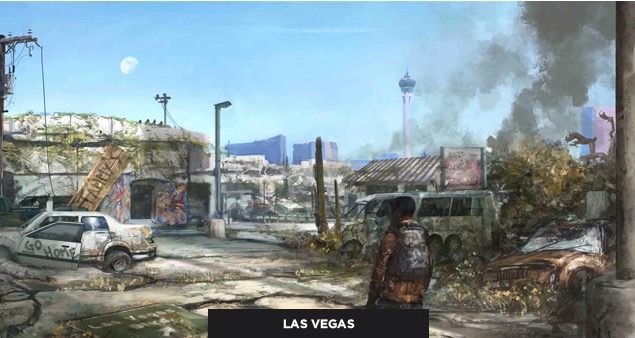 Having sucked people in through the world and character design, Drake hopes that he can use The Indies to explore issues that affect us in the present.

There is, of course, the issue of morality: is Slick justified in doing whatever it takes to survive? Is there such a thing as going too far, of sacrificing too much for a dream? Have we constructed our society in a sustainable way?

“One of the things I wanted to explore is socio-economic issues. In this world, if you’re more well-off, you get to live on the Moon, because you can afford it. And the reason the Earth has kind of crumbled apart is because since the rich people are living on the Moon, they’re not really putting resources into what’s going on on the Earth. And so I feel as if though you can apply that to different neighborhoods and gentrification, and as people move, the resources move.” 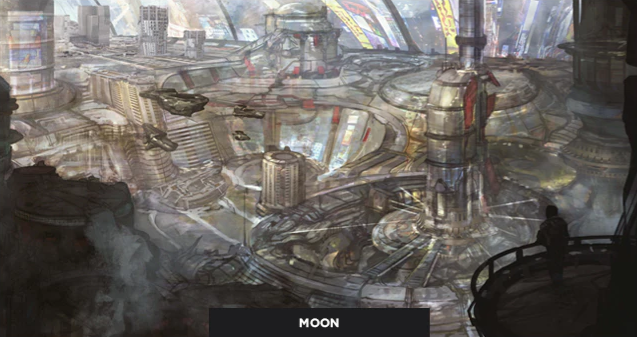 Drake also hopes that The Indies can help to prove a point about diversity on television. The show has five main characters, and all five are black.

Although film and television have become increasingly diverse, the white default still exists. One reason for this is the conventional wisdom that audiences in the United States and abroad respond better to shows and movies with white protagonists.

Drake wants to prove that those shows aren’t outliers, and that the conventional wisdom is wrong.

“I think people just want dope television. Like, ‘Just give me a good story with some good art, and I’m good.’”

Making a good story with good art is easier said than done, but Drake feels that he and his team have pulled it off.

“If this show comes out, and after the first minute, you’re still focused on the color of the characters, then I didn’t do my job as a storyteller.”

Drake isn’t pulling this idea out of thin air — he’s seen it in action. “What I’ve been seeing when I’ve been going to the Comic Cons, is that people that look nothing like the characters are really digging the story.”

People of color have responded well to the characters as well. “If you’re a person of color, you don’t normally see that on TV, so that’s a really dope thing to be able to see.”

Sadly, although Drake is sure that quality is all that matters, he has run into some resistance to this idea. 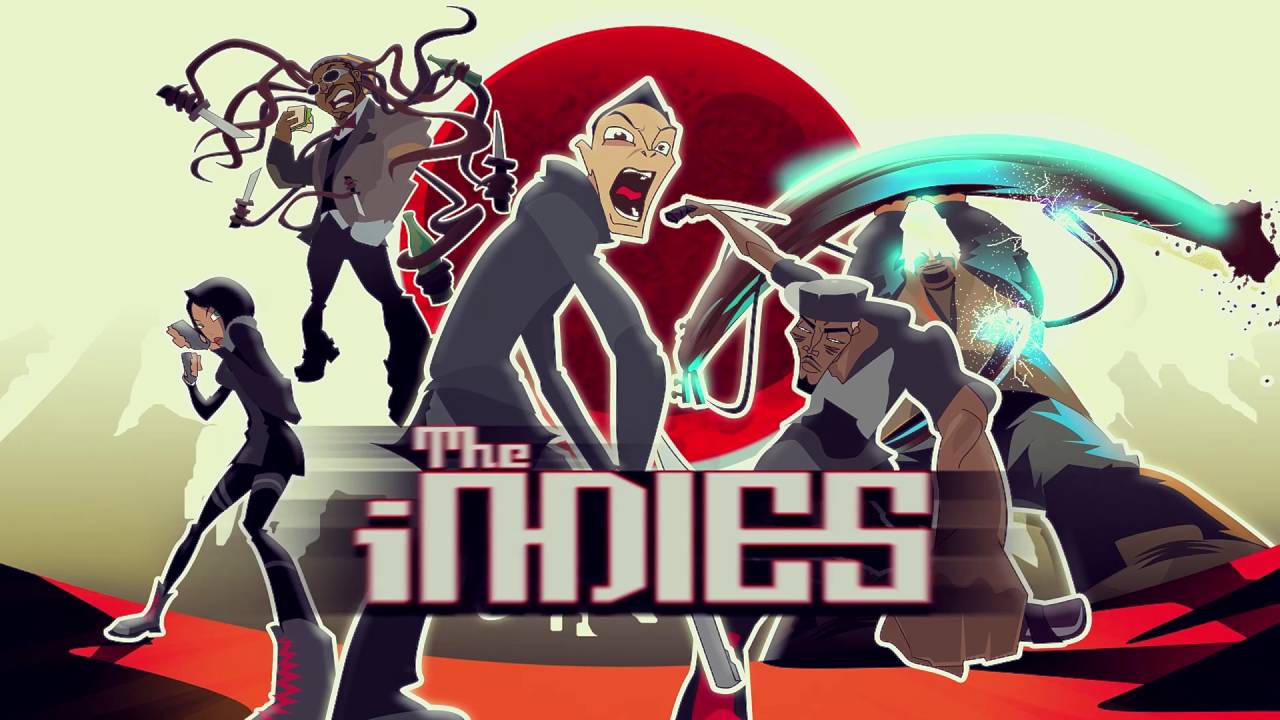 And they’re like, ‘Well, are there any other characters?’

And that’s really them saying, ‘Are you sure that you want all five black characters to be the main characters?’”

Drake is sure. And he’s just as sure about the hip-hop soundtrack.

“The hip-hop community as a whole is one of the world’s biggest consumers, but you don’t have a lot of entertainment that talks directly to us. You’ll get shows that love to exploit us, but nothing that’s really for the culture.”

In order to give something to the heads, Drake went to Grammy award winning House Studios in Washington, D.C.

With the music, the character design, the scripts — with everything, Drake worked hard to make sure that every element of the show was of the highest possible quality.

“My hope is that as we push forward and try to get more of these cartoons on TV, it makes it easier for the next person to come in … that’s kind of the reason why I’m trying my hardest to make sure that this is done the right way, because I don’t want to mess it up for anybody else to come after me. I don’t want it to be where someone else has an idea where they have five main black characters and then there’s some executive that says, ‘That’s all fine and dandy, but The Indies was good, and The Indies didn’t make it, The Indies didn’t get funded’ and that’s a strike against them.

Raising capital is key for Drake now. He has second round meetings with studio executives coming up soon, but wants to show them rather than tell them that there is an audience for his show.

And so he’s started a Kickstarter. “If we can walk in there with all these backers and already going into production, it’s going to give us so much leverage in that meeting.”

Drake hopes to raise $50,000. During our interview, he was about halfway there. He told us not making his goal wasn’t an option, “I can’t have that happen."

As happens at the conventions he visits, Drake has seen a lot of positive feedback about the Kickstarter. And the free preview comic he and artist Icky H. have created to go along with the campaign has been lauded as well. 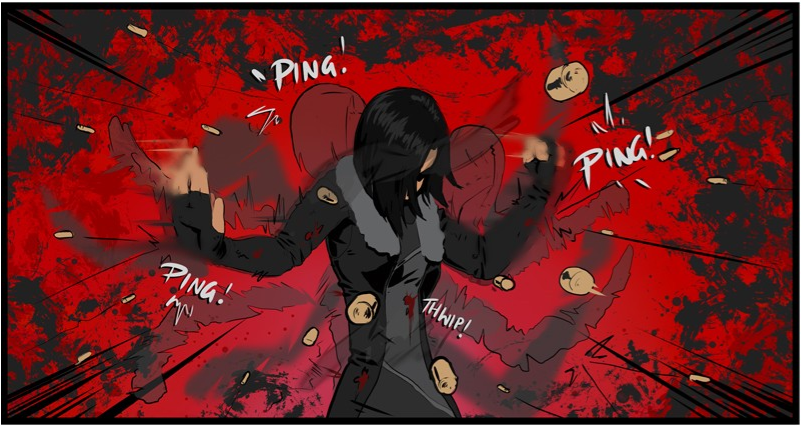 There certainly isn’t anything quite like The Indies on television now.

“I think we’re really on the verge of doing something special … you really don’t see high quality animation coming out of places outside of Korea or Japan or Hollywood. So to be able to do something like this, it’s something special and unique.”