Experts in Egypt may have found Queen Nefertiti's tomb

In the resting place of the pharaoh, Tutankhamun, experts in Egypt may have found Queen Nefertiti's tomb.

Mamdouh El Damati, the Egyptian Antiquities Minister made a statement that results from a radar scan performed recently at the tomb site has experts 90% certain that two new chambers have been discovered. Material, believed to be organic, was detected behind the two walls of the pharaoh's burial site that could be the link that solves the mystery of the Queen's final resting place. Archeologists have been searching for Nefertiti's burial site since the initial discovery of the pharaoh's tomb in 1922
British archeologist Nicholas Reeves is one of the experts, along with El Damati, who were given the green light to search for Nefertiti by Egyptian authorities, and based on this new information they will be conducting further scanning and additional exploration to determine if they in fact, have found her burial site 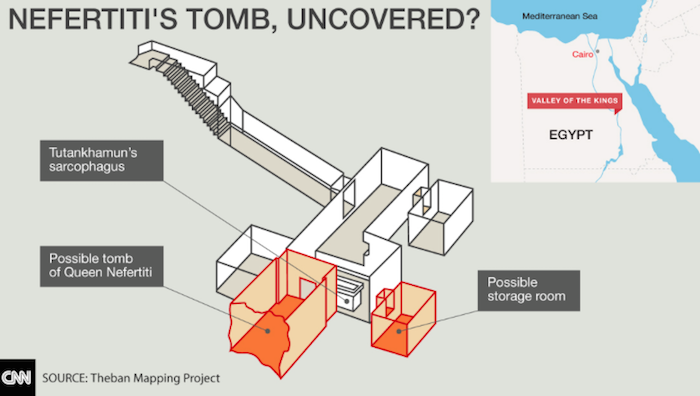 Photo: CNN Queen Nefertiti was the Egyptian ruler alongside her pharaoh husband, Amenhotep IV. After her 12 year reign the trail goes cold, as she seemingly disappears from history. Some historians speculate that she moved on to rule under a different moniker, while most believe that she passed away. As there are already precious and fragile findings in the tomb of King Tut, the Antiquities Minister said, "We must find a way to protect the tomb of Tutankhamun... Does that mean we will dig from above, below or from the side? We don't know." At the conclusion of the exploratory mission, a press conference will take place in Cairo where the results of the team's findings will be discussed and examined at length

What do you think about the search for Nefertiti? Let us know in the comments.

READ NEXT: This gospel singer will leave you weeping by the end of this video