On learning to code-switch and falling in-between identities

My parents decided to move to the USA for more opportunities and a better education for me. My mother had gone to an HBCU and felt it was important for me, as a black person, to be educated in the U.S. It was always important to her that I understood I was black and Italian, even though I had light eyes and hair, spoke English and lived in Miami, FL now.

Translating my identity to the people around me, however, proved to be more difficult.

People often asked "What are you?" or tried to guess—

When I said "Italian" — I was born there, after all — I only got dumbfounded looks.

"My mother is African American."

"Ooh. I thought it was more exotic."

Exotic. I got that one a lot. I think that's part of the reason my mom tried so hard to remind me of my heritage. No matter who I was speaking to, the assumption was always that I was different from them; an apparition from some distant place where the people are beautiful and seduce you in a foreign tongue. I started modeling at six months old, and some of my earliest memories are of being marketed as exotic. As I got older, my 'mom-ager' saw this as an opportunity. I would show up to all the casting calls. Looking for a black child? Sign me up. A Latino child? That's me, too.

Here I am modeling for a German catalogue.

I remember going in to meet with clients and they would ask, as usual, "So, what are you?"

I responded, as rehearsed, "What are you looking for?"

They would usually chuckle — what a precocious child —- and insist, "No, really sweetie, where are you from?"

"I can be whatever you want me to be. I bet you couldn't guess where I'm from, and neither will the customer."

I was very successful. Hiring me checked most of the boxes, made your brand seem inclusive and relatable to the 'other.'

Photoshoot with Bruce Weber for spread in W magazine in 2004

This was my childhood. I was a shapeshifter, hyper-aware of the way identity was constructed through performance. Outside of modeling, I went to a Jewish elementary school and thought kosher meant 'healthy' (kind of like organic), until I transferred to an all-girls Catholic school; meanwhile, I lived on and off with my two best friends (and fellow child-models) who were Taiwanese, so I started learning Mandarin, Mahjong and Buddhist practices. People often tell children "You can be anything!" I don't think they usually mean it literally.

As an adult, I think back on this time and recognize my privilege. I'm reminded of who wasn't chosen for the job when I'm outraged to see Zoe Saldana chosen to play Nina Simone. Joseph Fiennes cast as Michael Jackson. How much was I appropriating other people's identities for financial means? Was it my choice? Did I even understand why they cast me? I was immersed in so many cultures, it often did seem as easy as putting on a costume, doing my makeup a bit different and adapting my dialect. There were layers and layers of code-switching.

I also remember what effect this had on me, as a child just beginning to understand who I was; what it meant to be everything and nothing at the same time. How my 'exoticism' caused me to be sexualized even as a young child. I still flinch thinking about how many older men leered at me asking when I would turn 18, even when I was pre-pubescent. And then I remember that Zoe Saldana has played multiple types of "sexy aliens" as well. The fetishization of the other is encoded in my unfamiliar features.

Outside of 'work,' it was important to me to create and express my own identity. I identified as a tomboy, although I loved bright colors and patterns, psychedelic '70s style (especially bellbottom jumpsuits), costumes and make-up. I remember going to South Beach for Halloween and seeing drag queens in the most amazing clothes I had ever seen. I loved it immediately.

I got my own first dose of drag in a photoshoot for Tommy HIlfiger when one of the boy models didn't show up. The producers were angry and didn't know what to do with the shots they had planned for him. I knew this was my opportunity and I offered to take his spot. This opened up a whole new set of castings I could show up for. 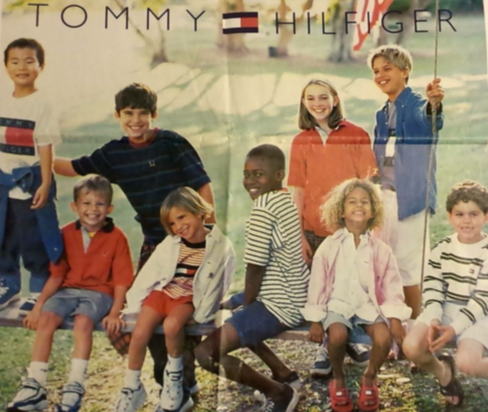 Photoshoot for Tommy Hilfiger, I am sitting second from the right. Photo: Nastassja Schmiedt

In this context the code-switch felt more subversive. I looked up to my mom's friend Nicole (a beautiful, talented, unashamed drag queen) who inspired me to see genderbending as liberatory and radical. For a female person to successfully perform masculinity and a male person to intentionally choose to embody femininity is a spit in the face to patriarchy. What I didn't know how to integrate was how much of my masculinity was a performance and how much of it was what made me feel more comfortable. My masculinity was often dismissed because of my love for the flamboyant and femme, but as a genderqueer adult I reject the fact that as a female-bodied person I have to only perform traditional masculinity for it to be recognized as legitimate.

I prided myself on my ability to become what other people were looking for. But as I grew older it got harder and harder to distinguish between what was the performance and what was me. Slipping between the lines gave me the opportunity to fit anywhere; on the other hand, it also meant the real me often fell between the cracks. I remember friends telling me I wasn't black because I was Italian, and being othered as the black American cousin when I visited family in Italy; casting directors telling me I didn't 'sound black,' and school bullies calling me n****r as they pulled on my afro.

There was no doubt in my mind that I was black Italian, but when that was so consistently erased by my surroundings, did my opinion count? If race is performative, then did my self-identity mean anything if it was not mirrored and recognized within my performance? Every person of color I know has had to learn to code-switch. And the reality is that performance is incentivized. If I put on the right costume, dialect, and respond with the right scripts for the gender and race I am expected to perform there are financial and social benefits. I learned this at a very young age, which sometimes causes me to blame myself these days for the social and financial repercussions of choosing to subvert these expectations in favor of a more accurate performance of self.

In a society that chants "Be you! Be unique!" it can be really hard to figure out what that means. What is 'me' when there have been so many iterations of my self?

Modeling as a child was an eye-opening experience. I learned that race and gender are performative, as well as what types of performances are incentivized and when. I learned to code-switch, but I also learned how successful code-switching can create a mask for the self in exchange for affirmation. I got to see behind the scenes of the construction of a narrative meant to sell a product through the commodification of the other. I became that other.

At the same time, I missed many of those developmental benchmarks, the moments when you come to understand yourself and share that realization with friends going through a similar experience. Being grounded in who you are is fundamental to living in a coercive and oppressive society that often makes people of color, gender non-conforming people, and really anyone who is outside of the norm feel less than, while still chanting praises for the unique and telling you to "be yourself!"