Remembering My Grandfather's Work on the Manhattan Project for #HiroshimaNagasaki70

To some, Dr. Samuel P. Massie, Jr. is the first African-American professor at the United States Naval Academy

Photo: Courtesy of Victoria Massie But to me, he’s more. 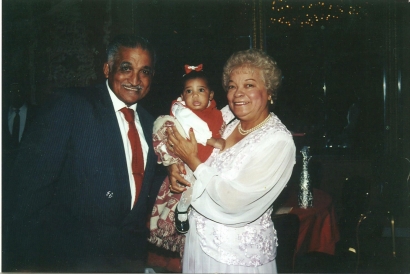 Photo: Courtesy of Victoria Massie He’s Pop-Pop, the affectionate nickname I had for my grandfather before I had to learn anything about his legacy. To me, he was a man whose charm was as smooth as his pepper-speckled hair pressed flat from time. He was the man who showed me how to take out your own teeth and let them sit in seltzer while you rest next to the one you love. And he did. He loved my grandmother. While never remiss to respectfully remind any woman of her worth, Pop-Pop was never arrogant enough not to bend his knees on Episcopal pews, thanking God for that fateful day at Fisk when he met my Mommie Gloria. Never once did he not pray he’d get tomorrow just to share it with her
But it wasn’t until my Black History Month presentation in sixth grade that I had to begin to confront the full weight of who he was. Instead of presenting on Crispus Attucks, my pre-approved black history figure, I improvised and chose him. Standing in front of my peers, I filled my five minutes with a list of facts about a man no one else knew but who shared my name. A man who, born in July 1919 in North Little Rock, graduated high school at the age of 13. A man who went on to become a leading organic chemist, listed with Watson and Crick, and who broke the color line when tapped by LBJ to teach at the Naval Academy in 1966. I told them about how he had to live in Laurel, MD because Annapolis realtors denied him housing. But when I told them the last fact, that he was my Pop-Pop, the tone shifted. With the blackboard as my witness, I was hit with a mix of gasps, claps and exasperated silence, a reaction to a black girl too bold for her britches in a big small town in North Carolina
The man I knew most for entertaining my croonings of the Men In Black theme song in the living room was now a man presented alongside Martin, Rosa, and Harriet. And I was proud. I often wonder what treasures we don’t even know we have because they don’t fit the frame we’ve been prescribed by others to use to understand ourselves. How often do we not tell our own unscripted stories? Often, yet I never felt more worthy
In the final years that I had with him and in the decade since his passing, I have held on to this narrative, recited the facts to myself when I’m most weary. It’s what makes me fearless, reminds me of my right to be carefree, and why I so unabashedly push my friends to be the same. But in the week that marks the 70th anniversary of the bombings of Hiroshima and Nagasaki, one fact needs serious reevaluation: Pop-Pop worked on the Manhattan Project

The Trinity Test From his Washington Post obituary to a Tom Joyner Morning Show clip, his hand in the Manhattan Project and the creation of the atomic bomb is stated like a bullet point. Never is this anecdote complicated by the aftermath of the bomb when it hit its target
I think it’s time to finally do so. He came to the project through the convergence of a unique set of life circumstances in May of 1943. Pop-Pop had just finished up his second year of a Ph.D. program in organic chemistry at Iowa State University when, on the 11th, his father died. Days later, he would return to North Little Rock for the funeral
But his duty was not only to pay his respects to his father but to his country. A year and half after the attack in Pearl Harbor, America was at war and Pop-Pop returned to renew his deferment papers based on the draft exemption given to those pursuing higher education
The draft officer thought otherwise. When bringing the necessary documents to the draft board, Pop-Pop was told he had “too much education for a nigger.” The military had only just integrated combat by letting the Tuskegee Airmen fly on the front lines that April. And yet, there in Little Rock, a military officer couldn’t wait to take advantage of racial progress to send my grandfather off as an equal opportunity sacrifice disguised as patriotic duty. After being told he would be assigned to an army base shortly in the days that followed, Pop-Pop contacted his advisor, Dr. Henry Gilman. Either Gilman would have to figure out a way to keep him in the laboratory or the army would keep him in their ranks just long enough for him to inherit the legacy set by Attucks
Because Pop-Pop’s education had proved more fatal than fruitful, Gilman had to create an alternative. Despite the name, the Manhattan Project, started in 1941 out fear of a German atomic weapon, was a unique network of laboratories across the country dedicated to finding ways to break the atom open and unleash her energy. One of those laboratories was at Iowa State and was run by Gilman. And one of the stipulations of working on the project was indefinite draft deferral. Gilman sent papers down to the draft board stating that Pop-Pop would join the team. Coincidentally, the draft board continued to lose them. Only through the university’s and Gilman’s persistence was Pop-Pop’s deferment renewed, but with a warning from the draft officer: “If this boy ever acts up, let us know and we’ll put him in the army.” Had Pop-Pop not worked on the project, I know as well as he did in May 1943, that neither he nor I would be alive
But our lives came at a price. 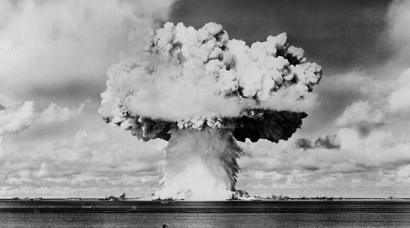 In America, the Manhattan Project is explained off as a necessity of war. Something we had to do. And as duty, the keloids my grandfather developed on his back and chest and the horrors of watching a fellow chemist blow up in a lab next to him are treated like war wounds. Like medals of honor amplifying my grandfather's legacy with a chemically catalyzed patriotism
Yesterday, however, I listened to the testimony of one of the bombing's survivors — Bun. [embed]https://www.youtube.com/watch?v=YqJvX-TJAX4[/embed] She, too, was just paying her respects to her country. The morning of August 6, 1945, she left her oceanside home on the outskirts of Hiroshima to walk to the city center to work one of the jobs Japanese men couldn't while they were away. And yet, that was not enough to protect her. Standing at the window of her office at the Ministry of Communications building, she remembers the moment the bomb hit
She describes it as the "sun falling in front of [her] eyes," and it's hard not to see my grandfather's culpability. In the blinding and burning light emitted at the drop of "Little Boy" is his story of having to take part in the bomb's production because of a man who saw him more boy than human. More nigger than American
I will never know how Pop-Pop felt about this. I was too young when he died to know I needed to ask. But, quite frankly, it doesn't matter. Whether by force or by choice, Bun's survival and the death of over 130,000 people are on his and my hands. On the 70th anniversary of the bombings on Japan, I won't reduce this to an annual reminder of the beginning of the end of World War II
I know I can do better than the stories I've been told to tell of myself from history books
Pop-Pop taught me that
Instead, I want to take this moment to do what my grandfather did best — teach. Our world is founded on a logic that denies the fragility of human life by disposing of each other so callously through the creation of false dichotomies, such as white and black, comrade and enemy combatant. We are quick to kill but slow to empathize enough to see ourselves in another human being. If there is anything I have inherited from Pop-Pop's particular place in history at this moment, it is a duty to use every fiber of my being to do the work to ensure this never happens again. May I hope I don't let him or the victims of Hiroshima down