Caution: This article contains mild spoilers about the film.

In television and film, we see black greek life depicted on screen, with references to it in shows like the black cult-classic TV series, A Different World, to even more recently in Netflix's hit show, Luke Cage. However, movies and TV shows directly depicting the experience of BGLOs (Black Greek-Lettered Organizations) are few and far between. The most notable depiction is in Spike Lee's 1988 film, School Daze, a comedy-drama which was created at a time when hazing was considered legal in BGLOs. Now, nearly 30 years later, a new film chooses to take underground pledging, which came about due to the illegalization of hazing, straight to its head.

Burning Sands, which debuted at the Sundance Film Festival, will make its debut as a Netflix exclusive release on March 10. It was directed by Gerard McMurray, who worked on Fruitvale Station, and also joined Omega Psi Phi Fraternity, Inc. while at Howard University. It features a bevy of talented actors and actresses including, Trevor Jackson (American Crime) — who plays the lead character of Zurich, Alfre Woodard, Trevante Rhodes (Moonlight), Serayah (Empire), Nafessa Williams (Black Lightning), Imani Hakim (Everybody Hates Chris) and many more. It follows five pledges of the fictional fraternity, Lambda Lambda Phi, at the fictional HBCU, Frederick Douglass University, as they go through "hell week," the most intense five days of their 4-week pledging process. 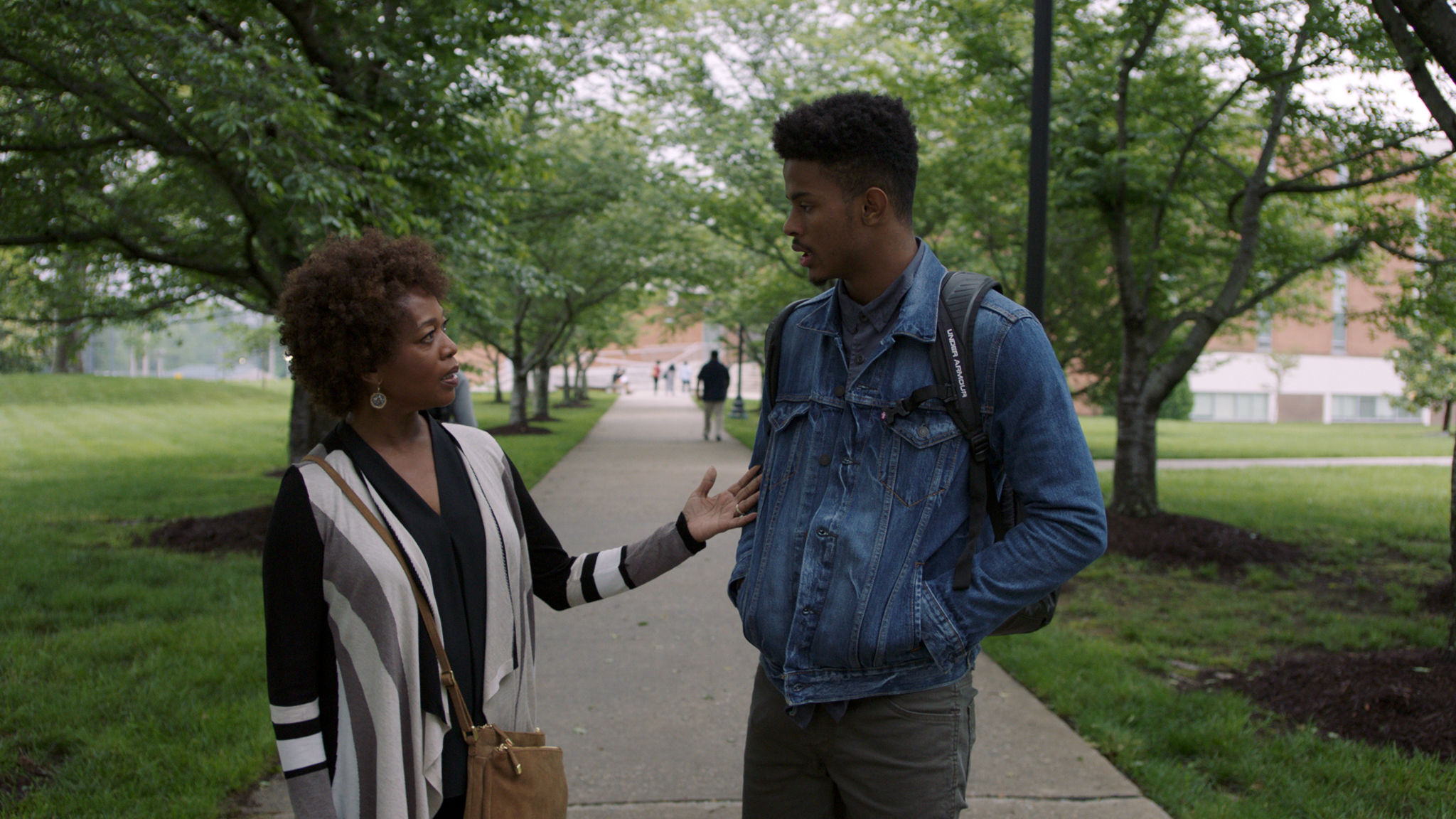 Jackson talked to Blavity about his experience shooting the film, the taboo subject matter that the film undertakes, what he hopes people take away from the film and much more.

According to Jackson, he was first hit up to star in the film about four years ago, when he was 15. After two years passed, there was another lead chosen for the movie, and Jackson auditioned for two other roles in the film. After auditioning for those roles, he was offered the lead role the next day. "I was like, OK, that’ll be dope, and the reason why is [McMurray's] so passionate about it and he knows what he wants. When you work with a director, you want to work with a director that knows their vision and doesn’t try to figure it out while they are doing it."

In preparation for the role, Jackson says he watched numerous clips of different black fraternities, and met up with chapters of Kappa Alpha Psi Fraternity, Inc. while he was recording music in Atlanta. "Obviously they can’t tell me all that goes on, but with every bit of information they gave me I just tried to run with it." Jackson says he tried to put himself in a pledge's shoes. "When I was filming the movie, I tried not to get any sleep. I tried to sleep as little as possible. They go through a lot — stressed out mentally, physically — I tried to just take myself to the end of my ropes." 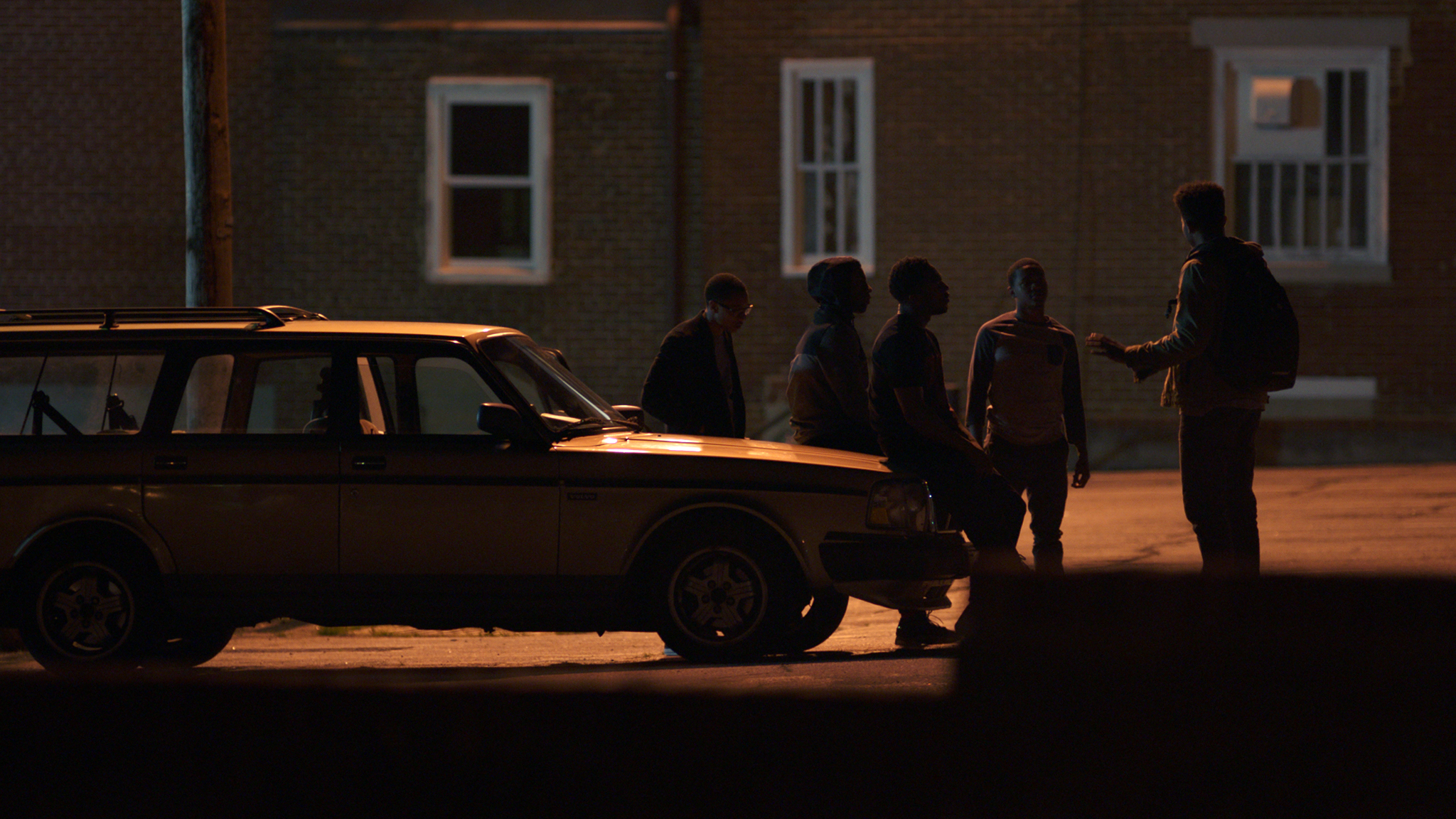 Despite the history of hazing and pledging in BGLOs being such a taboo and complex topic in the black community, Jackson said he didn't have any doubt or apprehension about taking on the role. "Here's what has to be clear — this movie isn’t based on a biography and it's not for fraternity or against fraternity. It’s literally just a story and that’s the beautiful part about it," he said. At the crux of this is Jackson's desire to be a part of truthful stories. "When I do any type of art, whether that be music or acting, it has to be truthful. And there have been situations of similar occurrences that happen in this film that happen in real life. I feel Gerard was touched by something that may have happened and wanted to tell a story about it. It’s not a biography, but it’s a story that needs to be told, I feel like."

Jackson was sure to reiterate that he believes the film isn't just about hazing, but he says it's about much more than that. "It's the other side of it too. It’s brotherhood. It’s black people in college. That's not something you really see on the news all the time. We see other stuff and I feel like being seen in that light is important. I was excited to be a part of something like that. I was definitely intrigued when I saw a role like this, of a black man in college going through some real stuff." 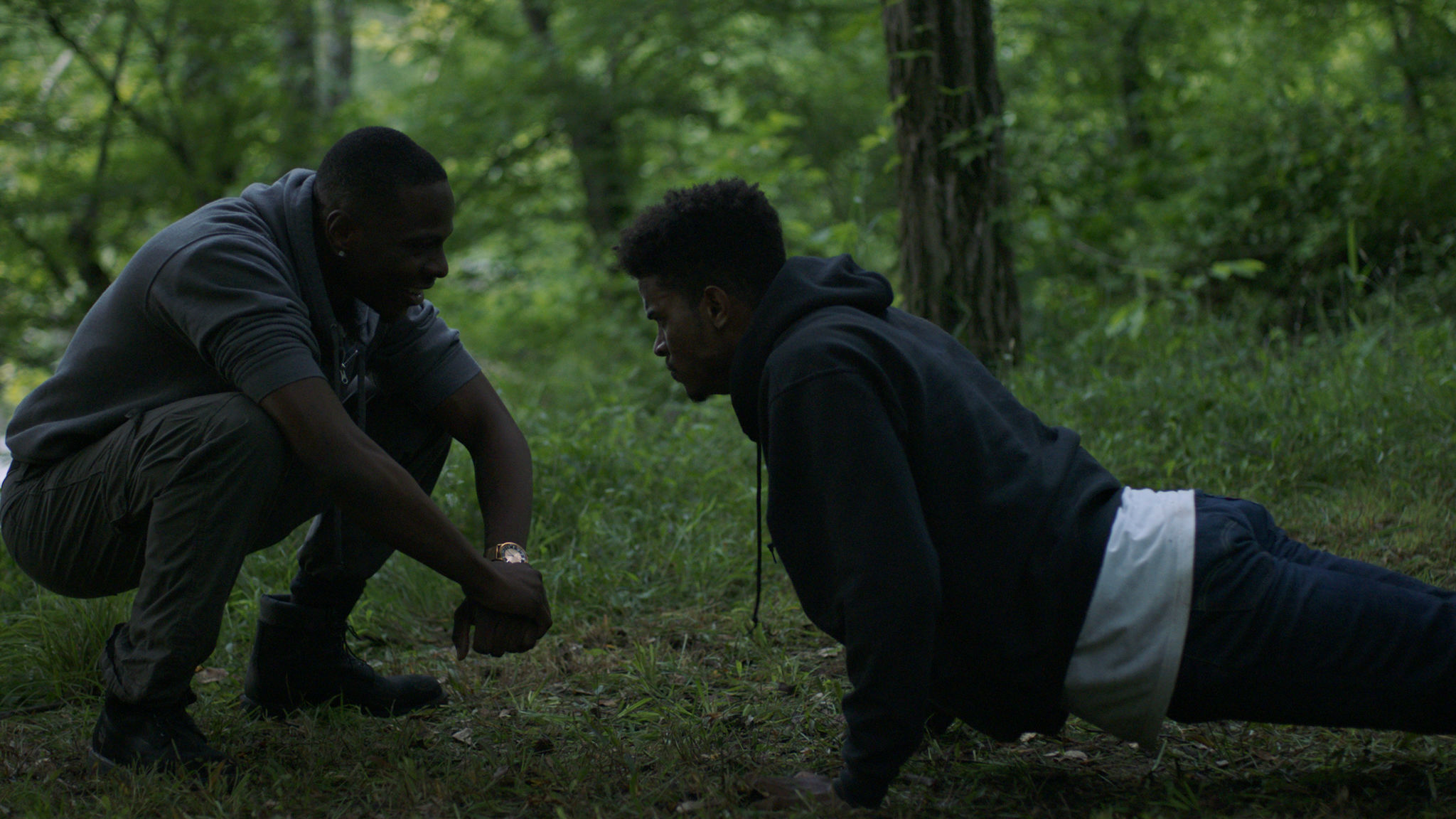 In the film, his character of Zurich acts as a leader and the glue between his line brothers. "I don’t think Zurich, in the beginning of the movie, knows that he’s a leader, " said Jackson. "You see the difference when hell night occurs. His attitude changes. Before, it was 'I'm going through it with you (his line brothers),' then the hell night scene is, 'I’m gonna go through it for you.'" Jackson said he didn't see this aspect of his character until after filming. "I didn’t even notice it when I was filming it, but after watching it I was like, that’s a dope switch." There is a scene in the film where Alfre Woodard's character gives him a piece of advice: people don't choose when they become leaders. "Before he was going through it with them, and after she tells him [the piece of advice], he really takes on that role, doing all of those things he has to do to be a leader. His attitude changes. And in that [hell night] scene, he’s leading them through that. It’s crazy to see his growth and I feel like that’s mainly what the story is about — progression." 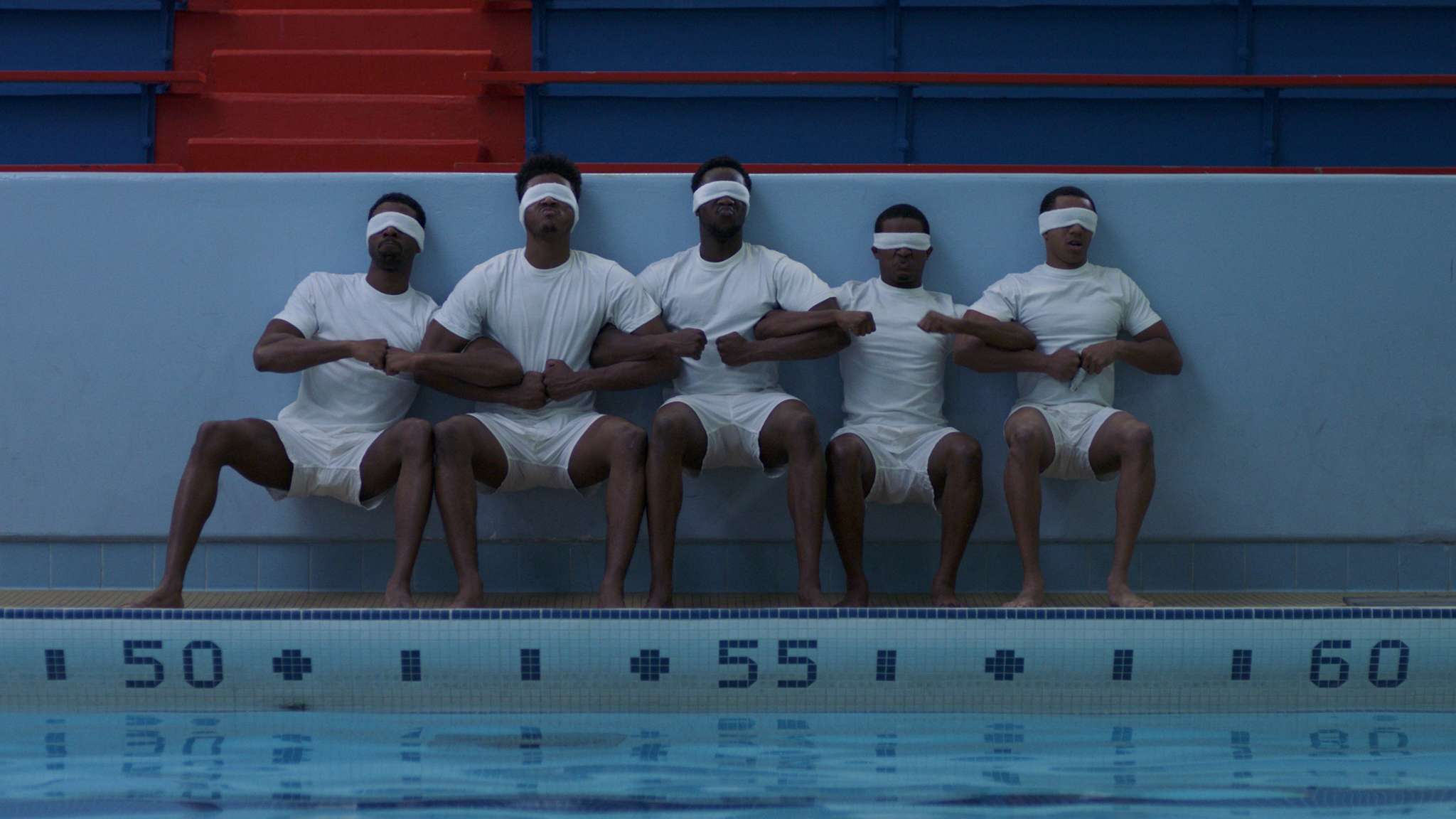 While we won't give too much of the film away, we will say that it has an open-ended closing, and the effects of all the actions of the film are left up to the viewer's imagination and interpretation. Jackson didn't want to say too much about what he thought would happen to the characters, but he did say, "I definitely believe there would be some stuff to happen." In that final open-ended scene, Zurich makes a call to his father, who we know also tried to pledge this fraternity when he was in college, but ended up dropping line. Throughout the film, his father texts him a lot, to which he's not too responsive. In this moment, Jackson believes that Zurich is breaking down. "He’s finally broken down. He’s been trying to be strong. He’s been trying to prove his dad wrong," he said. "At first it was, 'I can do what you didn’t do,' now he’s at this point of 'I need you; I’ve tried to do it alone and I can’t go on anymore without hearing your voice.' You just see him at the end of his ropes. That’s why it's so powerful. You see a man turning into a boy."

At the end of the day, Jackson wants people to walk away from the film learning to never silence or compromise themselves, saying, "Regardless of what you want to be a part of, whether it is Hollywood, whether it's a fraternity, whether it be anything in your life – never silence yourself. Never go against what you believe in. Stand up for you because that’s all you have. Even being human, we do a lot of things, whether they are behavioral things or conscious things, the hardest question is why we do them. That’s something people should ask themselves whether they are going into a fraternity, whether they are going to play basketball – it doesn't matter what the group is, but never silence your voice, or what you believe in, for something you may not be on the same page as."