Black Panther is apparently much too lit for one particular group of haters. News of a campaign to rate the new Marvel film poorly on Rotten Tomatoes recently hit Twitter, and the response wasn't pretty.

A very angry Facebook group comprised of DC Comics fans and traditionalists called Down With Disney's Treatment of Franchises and its Fanboys created the Facebook event entitled, "Give Black Panther a Rotten Audience Score on Rotten Tomatoes," according to Screen Rant.

The campaign, as its name suggests, calls for giving the film bad reviews in order to drag down its Rotten Tomatoes score. The creators of the event wrote, "it's time to strike back" at Disney due to their "corporate manipulations."

The creators of the campaign also asked to people post spoilers all over the internet in order to anger "Marvel fanboys."

Nearly 4,000 people have said they plan to participate in the event, and several left enthusiastic comments of support. 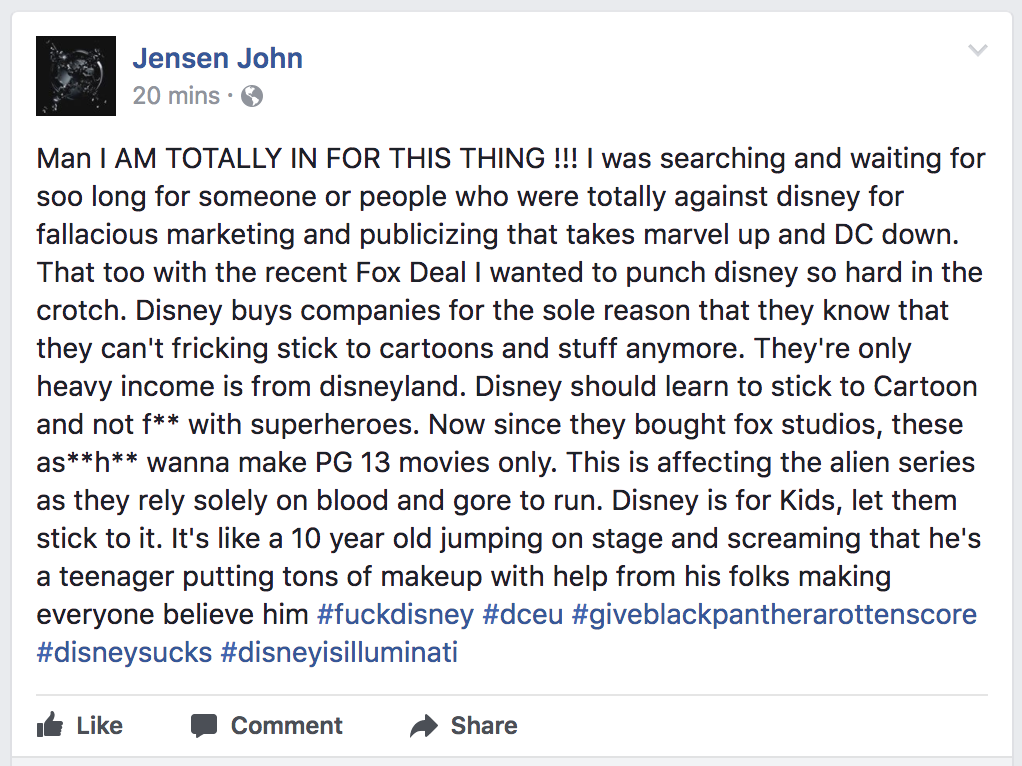 Several others wrote comments to call out the campaign as "racist" and "pathetic," opinions that were largely mirrored on Twitter.

They do this shit to black movies on IMDB all the time too. Justin Tipping’s movie Kicks had thousands of negative reviews before the movie even came out a few years back. https://t.co/hz8EzA9Z7P— Matthew A. Cherry (@MatthewACherry) February 1, 2018

This is a dog whistle like a MF too. Didnt see shit like this when Thor or Spiderman came out. pic.twitter.com/K5LKtED33Z— Matthew A. Cherry (@MatthewACherry) February 1, 2018

Historically, every time Black folks as a people, celebrate something that brings us joy, these fools try sabotage our joy to remind us of their caucastic mediocrity.

They are terrified of us and our power. Their fear of us is as constant as our magic.

While the Black Panther post does not include any overtly racist language, Inverse notes the Down With Disney's Treatment of Franchises and its Fanboys community does include language disparaging “SJWs," an abbreviation for "social justice warriors." The term is one often found on alt-right and white supremacist outlets, and is a pejorative used to describe those that promote socially progressive ideas such as pay equality and civil rights for all.

Black Panther, which opens on Feb. 16, has already broken pre-sales records, and is tracking to have a historic debut. It's unclear what effect, if any, this campaign will have on the film's box office numbers.