Contrary to popular belief, raising the minimum wage will not hurt small businesses or spike inflation.

Opinions are the writer’s own and not the views of Blavity.

This year, celebrating Black history month looked a little different. For fast food workers across the country, they celebrated with a strike, demanding better wages and worker protections.

On Tuesday, February 23, workers involved in the #FightFor15 protested the abysmal wages and unsafe conditions they endured during the COVID-19 pandemic. McDonald’s still pays many of their employees a federal minimum wage of $7.25 an hour. This means if you work 40 hours a week for an entire year — without taking any unpaid time off, without having to pay off student loans or medical expenses, without anyone else to support — you are still just barely over the federal poverty line in most states, and below it in Alaska.

But those are just figures on a federal chart. In reality, no one in this country can make ends meet on minimum wage or even $1 more (which McDonald’s often pays) or $5 more an hour. People have been fighting for so long to raise the minimum wage to $15 that when you take inflation over the last decade into account, we really should be asking for $24 an hour, which is the average cost to rent a two-bedroom apartment across America.

Last month’s strike focused on Black communities because we have faced generations of inadequate pay and unsafe working conditions. During COVID-19, Black families have been racking up the highest death toll and have been hurt the worst in a fend-for-yourself economy.

Contrary to popular belief, raising the minimum wage will not hurt small businesses or spike inflation. Studies show that a living wage actually supports our economy and all the people in it because those struggling to get by put that money right back into circulation. And if America raised its minimum wage to $15 an hour, nearly a third of Black workers would get a raise, according to the Economic Policy Institute.

The injustice that McDonald’s workers endure is no joke. At Color Of Change, we have interviewed people working 70 hours at three different fast food restaurants barely scraping by — without health insurance, a retirement plan or paid sick time.

In the early days of the pandemic, we heard outrageous reports of some McDonald’s refusing to close, staying open 24 hours a day and retaliating against workers if they tried to require customers to wear masks or asked for time off to quarantine after being exposed to loved ones with COVID. We heard reports of false advertising where McDonald’s would run an ad saying they’re paying $12.50 an hour, but only hiring for a much lower wage position when people come in for an interview.

McDonald’s had the nerve to tweet that George Floyd was “one of us” after he was murdered. But the fact is — they don’t even care about their Black employees’ lives. It’s unjust that the people being asked to risk their lives for their jobs are the ones getting paid the worst. 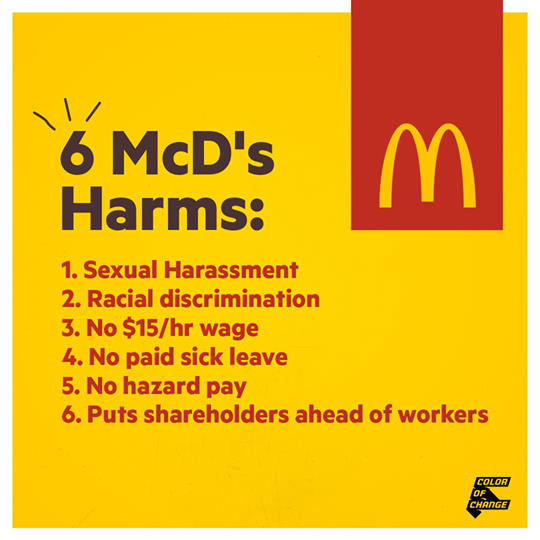 The list of ways McDonald’s mistreats their employees goes on and on — they are a  discriminatory business at the core. In September 2020, 50 Black McDonald’s franchise owners brought a class action lawsuit, claiming the company has blocked them from acquiring restaurants in more affluent and whiter neighborhoods, confining them to low-income areas where profit margins are smaller.

McDonald’s must put their money where their mouth is. Last July, the Strike for Black Lives happened in more than 100 cities. Last November, Florida passed a $15 hour minimum wage. It’s time for major employers to follow suit.

Billion dollar companies like McDonald's must do better than posting “Black Lives Matter” or putting “Heroes Work Here” on their signs. They need to make a real commitment to create structural change — and start by hiring Black executives, paying their workers a living wage and giving our communities the job protection and benefits we deserve.

Take action and join Color Of Change to help make it happen: Record A Video Calling On McDonald's To Protect Black Workers.