Colin Kaepernick Appreciates Rihanna's Realness Just As Much As We Do

The queen of shade strikes again.

The queen of shade strikes again. While on a jet on Super Bowl Sunday, Rih recorded herself staring blankly at the camera while her “weirdo” co-riders tried to stream the game. She captioned it, “How can we watch Super Bowl on the flight? Me:”

Rihanna was reportedly one of the celebrities who refused to support the Super Bowl because of the NFL’s blackballing of Colin Kaepernick. Since 2016, Kaep has garnered a bevy of support from celebrities and viewers alike. In addition to Rihanna, Jay-Z and Cardi B also reportedly declined to perform at the Super Bowl as the former San Fransisco 49ers remains unsigned.

After Rih’s deadpan IG story, she posted a video of one of the passengers with a “weirdo” sticker conveniently placed above them. It’s one thing to get roasted on social media, but to have said roasting come from Rih Rih?

Rih made it clear she ain’t here for the BS. She posted another clip on her IG story of Kaepernick kneeling with the caption: “For those of you who thought I was watchin super bowl… we beefin.” 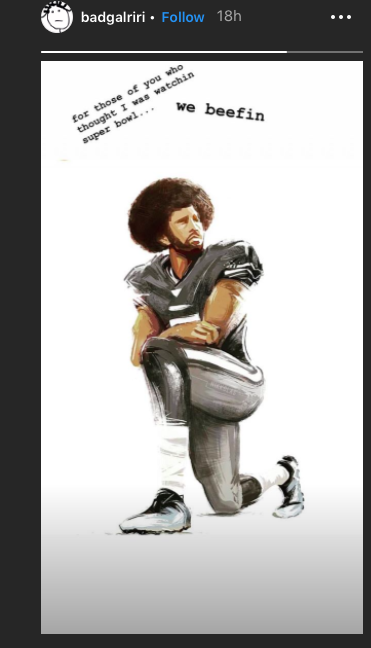 Kaep was all for the shade. The beleaguered former San Francisco 49ers QB took to his social media platforms to praise the princess of pop for her support.

"I really appreciate @badgalriri keepin it ????✊????," Kaepernick wrote on Instagram.

Viewership for this year's Super Bowl was at a 10-year low, according to Deadline. The Fenty Beauty queen wasn’t the only one protesting Super Bowl LIII. Ava DuVernay, LeBron James, Steph Curry, Janelle Monáe and Zendaya are just some of the people who voiced their support by refusing to watch the Patriots play the Rams.

No shade if you watched it. Just know…we beefin.'