LIT History: Before Simone Biles and Gabby Douglas, there was Dominique Dawes

The LIT History Series is for the Legends, Innovators and Trailblazers that have shaped our culture. I love history, and in turn, I love black history. So much of our culture has been defined by those who've come before us, so I write this to capture and chronicle our narratives
It's been a pretty epic week for athletes of color, especially with the announcement of the 2016 Olympic gymnastics team. With 16-year-old Laurie Hernandez and gymnastics powerhouses Simone Biles and Gabby Douglas, this year's gymnastics team is the most melanin-filled team in history. Simone and Gabby are clearly on their way to making this another historic year for black women in gymnastics, but before their time Dominique Dawes became the first Black woman to win an Olympic gold medal in gymnastics
I was too young to remember Dominique Dawes when she competed at the 1992 Olympics in Barcelona. I do, however, remember seeing her compete at the 1996 Olympics in Atlanta. Twenty years ago
Omg 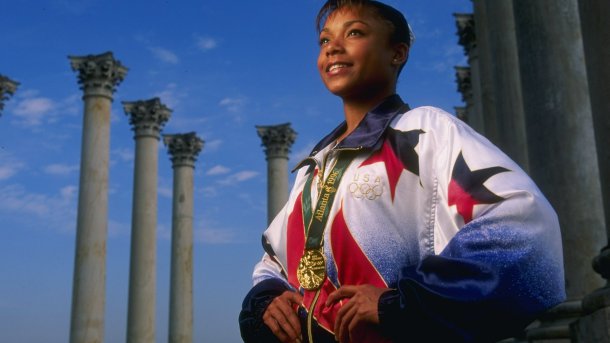 Photo: Doug Pensinger /Allsport This was the first Olympic games I ever watched and just so happened to be the very first time the U.S. gymnastics team won the gold medal. They were known as the "Magnificent Seven", and Dominique became the "Awesome Dawesome." 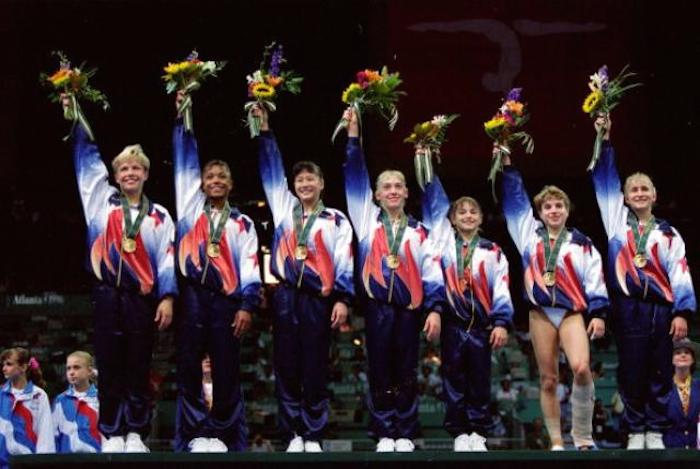 Photo: NBC Olympics For a young girl like me, it was fascinating. I became engrossed in the Olympics and all-things-artistic-gymnastics from then on
Dawes' record-breaking career didn't begin in 1992 though. She became the first black woman to earn a spot on a U.S. national gymnastics team. She's the first Black woman to win an individual Olympic medal in artistic gymnastics (bronze), and one of only three American female gymnasts to compete in three Olympics—Barcelona 1992 (bronze), Atlanta 1996 (gold), Sydney 2000 (bronze). When the U.S. team won the bronze medal in 1992, she and teammate Betty Okino became the first black women to win an Olympic medal in gymnastics. 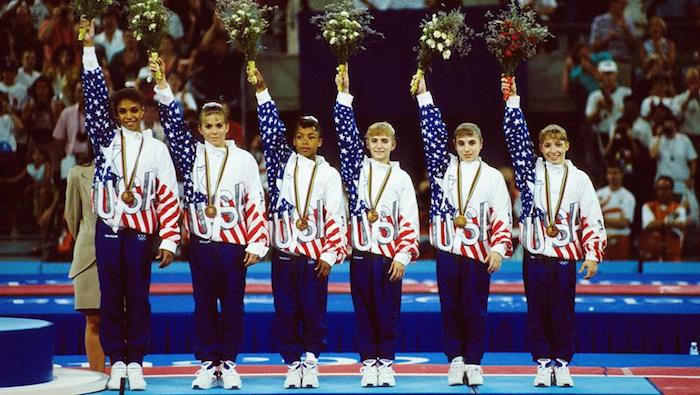 Watch Dominique perform her floor exercise at the 1996 Olympics.

Months after Dominique Dawes won her gold medal, Prince contacted her to say he was a big fan.

He then asked Dawes to be in his music video for "Betcha By Golly Wow".  In 2002, she graduated from the University of Maryland, and in 2006 she appeared in Missy Elliot's "We Run This" video as Missy's gymnastics coach
I am reminded of how I felt watching Dominique Dawes in 1996 whenever I see Gabby and Simone breaking records and making firsts. I'm sure young Latina gymnasts will feel the same way when Laurie Hernandez makes her first Olympic appearance, the first for a U.S. born Latina since 1984. Dominique has expressed how proud she is of Gabby's success at the 2012 London Olympics and the impact that Simone will have on gymnastics in Rio. I already know that this year, 20 years after watching my first Olympic games, I'll have those same warm feelings I had in 1996, watching all the #blackgirlmagic unfold on television